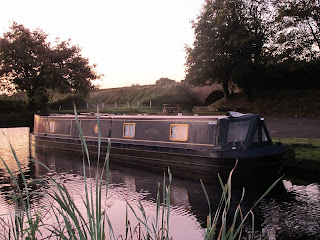 Yes, the time had come to move Zindagi back onto the main canal system, so we made arrangements for a lorry trip and a crane at each end of the journey.


We chugged away from our moorings at Orchard Farm on the afternoon of Monday 2nd October, and then moored a short distance away, at the Tiverton Road Bridge, the same place where we had the boat craned in almost exactly 3 years ago. 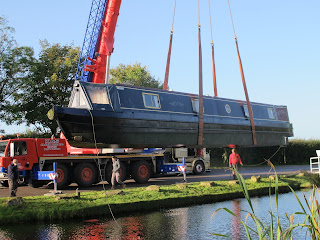 A night on board (first one for a while), in readiness for an early start on Tuesday morning.  We had Lottie, Adam's Rottweiler, staying with us while he was working overseas, so she came too. 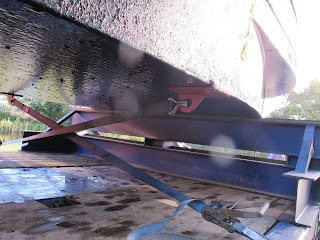 The lift went smoothly.  Same crane operator and same driver as last time, but a novel way of attaching the boat to the lorry – very neat! 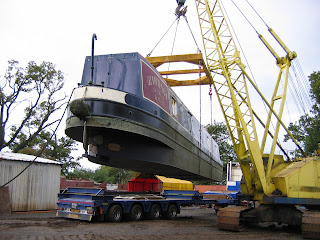 Then in the car and up to Hatherton Marina, Zindagi's new home mooring, where we left the car and got a lift from Dawn to her base at Industry Narrowboats near Stretton Aqueduct on the Shropshire Union, where we had arranged to have the boat craned in.
Not quite such a smooth craning-in!  It looked a bit scary at one point, when the boat was rocking around on the end of the chains, but in the end she was back in water, unscathed, and with only a few small things inside that had moved around! 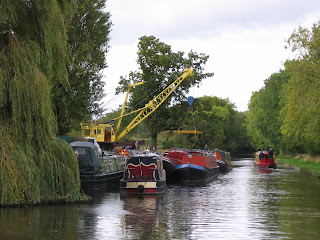 Back on board with Lottie (though she fell in on the way!) and chugging southwards towards Autherley Junction, where the 'Shroppie' branches off the Staffordshire & Worcestershire Canal.  We moored up for the night just a short distance from the junction and the 6 inch (!) stop lock.
Wednesday morning saw us going through our first lock in three years, then onto the 'Staffs & Worcs' and northeastwards up to Hatherton.  We have not been this way for several years, but it was amazing how familiar it seemed, as we often knew what was round the next corner! 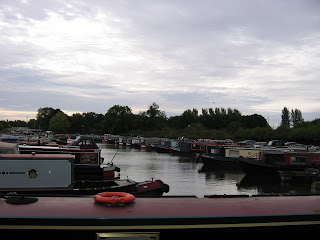 Quite a tight fit to get Zindagi's 57 feet round to reverse into our mooring, especially as it was a fairly windy morning, but we managed OK, made it all secure and left her there in her new home, before taking Lottie back to Adam in Shrewsbury and setting off on our way. 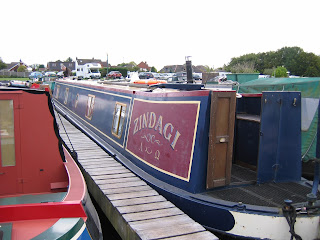 No disrespects to the Grand Western Canal in Devon, but it was really great to be back on 'real canals' again.  We both felt as if we were back on our watery travels again, like old times.  No plans to do any long-term living on board, but we really hope to be able to get out for a few odd weeks, hopefully with a few friends to join us from time to time.
Posted by Dave and Val Taylor at 1:00 pm