Since we last 'blogged' in January, visits to Blisworth and Zindagi have been few and well-spaced! 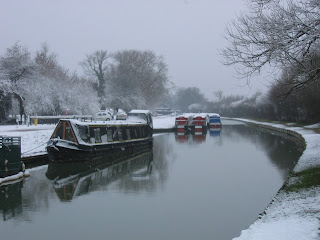 In the colder weather, we tried to visit roughly once a month, so that we could make sure that the heating (on a low thermostat setting) was keeping Zindagi frost-free.  The Northampton Arm near Gayton Marina looked tranquil in its February ice-bound stillness. 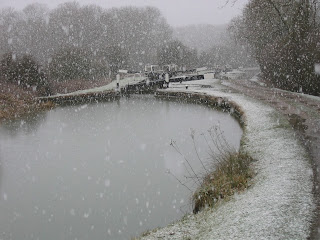 Five weeks later, and the long cold spring continued.  Snow on the Rothersthorpe flight as Dave took his morning walks.  The only 'cruising' on these two visits was to the marina's diesel pump to fill up the tank for the heating system! 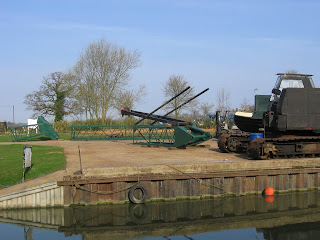 Late April, and Zindagi was booked in to Gayton Marina to be craned out for bottom blacking.  On our way up from Devon, we had a phone call from the marina to say that their crane was out of action, but that they hoped to have it working in a day or two.  As you can see, it was not just out of action, but still in pieces.

Fortunately, we had already planned to be on the boat for a week, but any hopes of getting out for a few days' cruising already looked doomed! 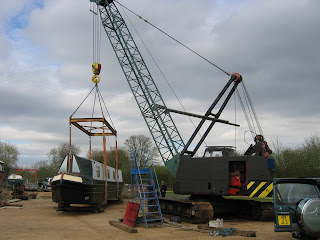 Three days later, and the crane was repaired and working.  First they had to lift out a boat that had been craned out weeks ago, before the repairs, and had been waiting to be returned to the water.  You may remember that we had exactly the same experience, two years earlier! 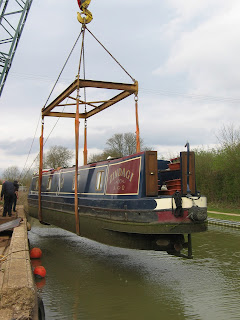 Then it was our turn to be lifted in.  The green algae would be pressure-washed off, and the 2-year-old bitumen coating was not too bad underneath. 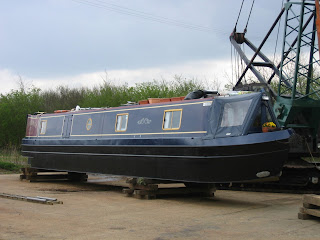 Three days later, and Zindagi looked a lot better with two more coats of bitumen blacking and the blue paint along the gunwales tidied up a bit.

Although Gayton Marina is very close to Blisworth Marina, we needed to do a short (half-mile) chug to the top of Rothersthorpe locks in order to turn around - the nearest we got to doing any actual cruising!  Our week was gone and we needed to drive back to Devon.

FIFTEEN WEEKS LATER (!), we returned to Blisworth on 9th August and found Zindagi was fine.  Batteries nicely charged from a short charge every day, diesel tank still quite full as Steve and John had kindly turned off our heating system in response to a phone call once Spring finally took hold - and still some electricity credit left in the meter! 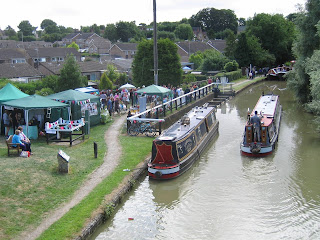 Our visit was planned (at short notice) to coincide with Blisworth's Canal Festival, so we have had a good wander round and seen almost all the attractions, as well as meeting up with friends.

Maybe we shall manage a week's cruise in September?
Posted by Dave and Val Taylor at 4:56 pm 1 comment: