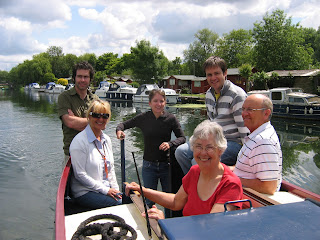 I should really start with an apology: It has been a very long time since I made a blog entry, and even what is here is not up to date! I'll try to get that fixed in the next few days, now that we have a slightly better internet connection. In the meantime, I need to continue where we left off, in Peterborough, towards the end of June . . .
Our 'appointment' in Peterborough was to meet up again with Jeremy's old school friend, Dan, whom we had last seen at the beginning of May in Huntington. This time, though, he was bringing his Mum and Dad (Barbara and Dave) and his girlfriend Dia 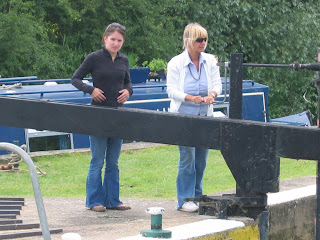 nne, who lives in Peterborough. Unknown to him, we had arranged for Jeremy to join us the evening before, so that he and Dan could meet up again after 20-odd years. So here is the crew at the back of Zindagi, setting off for a day afloat together! (L to R: Jeremy, Barbara, Dianne, Val, Dan, Dave) And yes, Dianne is at the tiller!
They had done their homework and planned ahead, leaving a car at Wansford Station before coming to join us at Peterborough Embankment, so we were able to enjoy a leisurely one-way cruise without having to worry about getting back.
After stopping at Ferry Meadows Country Park for a bite to eat, we carried on through Alwalton, where Dianne and Barbara got to grips with the lock, and on to Water Newton, which we think is one of the most picturesque places 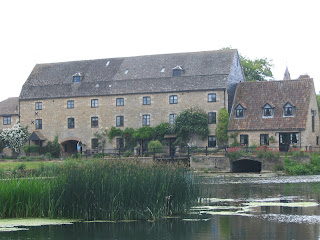 on the Nene. The old Mill, the waterside setting of the Parish Church, the impression of slow-moving country life – they all add to the enjoyment . . .
. . . and so to Wansford Station (which is not actually at Wansford), with enough time to look around the station before Dan and co. needed to get in their car to head back home. Jeremy stayed on board with us, planning to take the Nene Valley Railway back into Peterborough the next day – until we realised that the trains don't run on Mondays! He ended up walking into Stibbington the next morning to catch a bus instead.
But we had another appointment to keep as well. You may remember that Val had been given 1st July as the date for her second knee replacement operation, in Barnstaple in North Devon. Here it was, getting towards the end of June, and we needed to get back to Blisworth to pick up the car to drive down there. After our dawdling through the Middle Level, we now needed to accelerate a little! 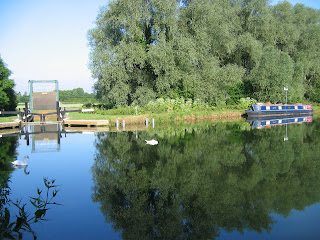 Instead of only cruising for a couple of hours each day, we now needed to keep going for an average of over 5 hours. We had good weather, so it really was no hardship; in fact, really enjoyable to be doing some 'proper' cruising again! Our first day, we cruised for just under 6 hours, which brought us to another favourite spot, the quiet and remote moorings just above Ashton lock, not far from Oundle. On our way downstream in April, we had tucked ourselves away here for a few days while I (Dave) was recovering from 'flu – it seemed an age ago!
The next day, at Wadenhoe Lock, we me 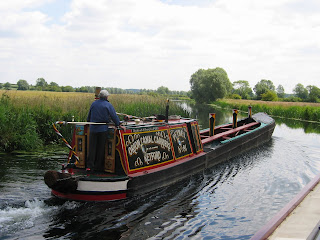 t up with Duncan and Margaret on 'Petrel', a lovely old 1914 working boat. It may be nearly 100 years older than 'Zindagi', but it could certainly move, and overtook us on the way to Titchmarsh Lock, where we stopped for lunch while they moved on. We hope to be able to look them up whenever we eventually visit the Chesterfield Canal. By the time we moored up later in the day, at Irthlingborough, we had been travelling over 7½ hours.
We caught up with 'Petrel' again the next evening at Cogenhoe lock, after a 6-hour cruising day. We had made such good time that we could afford to ease back a little now, so the next day's travel was only 2¾ hours, bringing us into Northampton by lunchtime – an opportunity to get a little shopping done before the final 'leg' up the Northampton Arm of the Grand Union Canal. 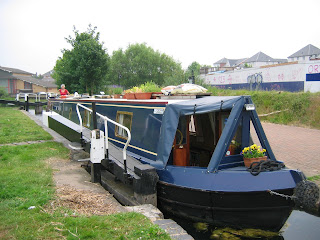 For us, there's something special about returning to narrow locks after a longer time spent on rivers and broad canals. As we have said before, it's as if narrow canals feel like 'home' in a special way, so coming up the first narrow lock from Northampton felt welcoming despite the somewhat plain surroundings.
It was nearly the end of June now and we had set out this way in early April, when Val's left knee was still feeling a bit strange after the operation at the end of January. Now it was the right knee that felt like the 'bad' one – the second operation was definitely due!
By later that same day, we had travelled up all the 17 locks and were back at Gayton Junction and turning in to Blisworth Marina. Pete and Val were expecting us the next day, but there was still room for us and we had a couple of days to spare before we needed to drive down to Devon.
Posted by Dave and Val Taylor at 9:30 pm No comments: