Birmingham to Blisworth – via Bosworth!

This year, we seem to have specialised in having the blog running absolutely ages behind real events - apologies again!

For your information, at the beginning of November we moved into our winter mooring at Blisworth Marina, near Northampton. We like it here, and have been back every winter since 2008/9! 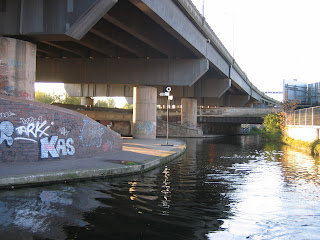 However, the blog last left readers on the outskirts of Birmingham in early August, so we shall try to get you up to date in the next few episodes . . .

Leaving the relative tranquility of the moorings at Star City, we were only a few hundred yards from one of the busiest motorway junctions in the country. Officially called Gravelly Hill, it is known to all as Spaghetti Junction. What many people don't know is that under the road junction is a much older canal junction, now dwarfed by all the roads and swamped by the traffic noise.
We have been through Salford Junction 3 times now. First in 1986 (!!), when we took our last family hireboat holiday. We had come through Birmingham and down the Aston Locks, emerging from the canal on the left just beyond the signpost. Then in 2008, when we had done our devious route via the Wyrley and Essington Canal ('The Curly Wyrley'), we came down from Perry Barr (straight ahead under the low bridge). This time, having come down 'the bottom road', we came out at the far left of this picture and took a wide sweeping turn to our right – we had joined the Birmingham & Fazeley Canal again! 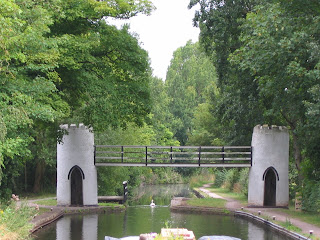 We have shown you this odd 'folly' bridge before, but it's still unique – the elaborate Drayton Manor footbridge, with spiral staircases up inside each of the towers and a walkway over the canal. There's a less decorative but very practical swing bridge just next to it, for wheeled traffic! We were approaching Fazeley, where the Birmingham and Fazeley joins the Coventry Canal. 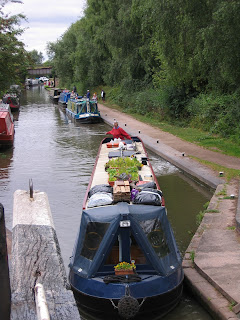 Suddenly, after Fazeley, the canal got busy! We had to wait in a queue to start up the Glascote locks, and the queue went on forming behind us as we entered the bottom lock. 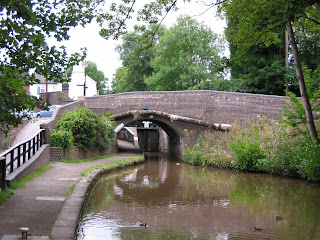 Skirting round the edges of Tamworth and through Polesworth village, we came to Atherstone and its seven locks, raising us 80 feet – our last locks for several days! One of the locks has a workable side pond, so we made use of the new skills we had picked up in Droitwich! Here is the old Watling Street bridge, but the A5 goes over a new one now! 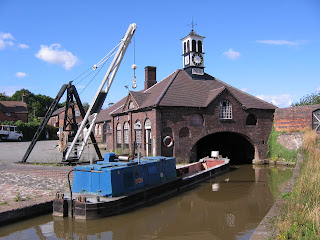 Just a couple of miles south-west of Atherstone, we passed the British Waterways yard at Hartshill, looking somehow timeless in the changing world around it. Solid and elegant industrial buildings! 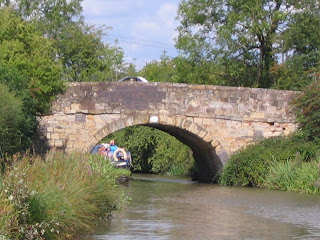 After plunging through Nuneaton's suburbs, we turned off at Marston Junction, where the Ashby Canal starts its 22-mile lock-free journey eastwards and northwards. The junction itself (like so many canal junctions) seemed quiet and remote after the suburban bustle, and the Ashby, with its stone bridges, fields and farming villages, is very different from the Coventry!
The Ashby Canal passes close to the site of the Battle of Bosworth (1485) and we took the opportunity to walk up to the centre on Ambion Hill and look around the area. On the hill, a copy of Richard III's flag flies, complete with his Boar symbol. (Henry Tudor's symbol was a dragon). 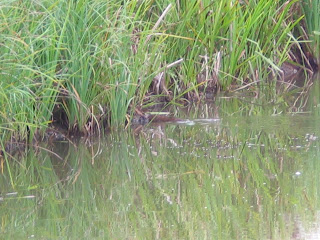 What's this picture of reeds by the canal? Look carefully, and you may see a water vole just making landfall. Not a good picture, but it's rare enough to see these little creatures, let alone get a picture! Back in the 1970s and 80s, when we first went canal boating, we used to see them quite often. Not now, since there are so many mink around, largely 'thanks' to animal liberationists some years back! 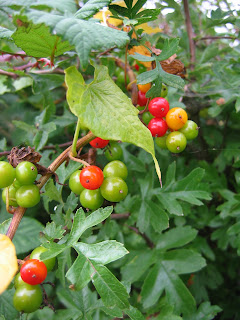 Late August, and the berries of Black Bryony were already turning from green to orange and red. 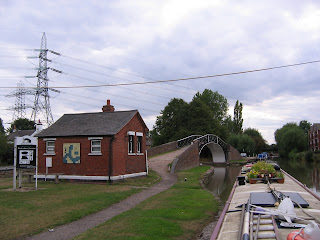 We had enjoyed our week on the Ashby Canal, but rejoined the Coventry, skirted Bedworth and then turned 180 degrees left under the bridge at Hawkesbury Junction on the edge of Coventry, where the northern section of the Oxford Canal joins. 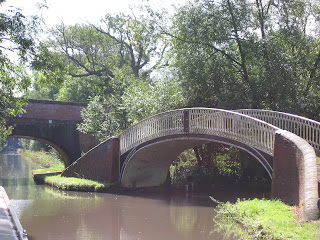 Near Newbold-on-Avon, the cast-iron bridge to the right takes the towpath over a short cul-de-sac which used to be part of the canal's old and very windy route. The bridge beyond leads the canal along the 'new' straightened route of 1828. 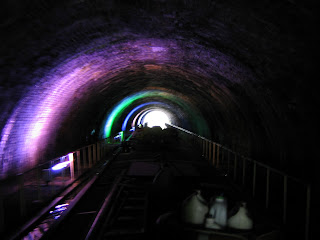 Passing underneath part of Newbold is the short Newbold Tunnel, unusual in having a towpath and even more so for being lit with an interesting range of coloured lights! 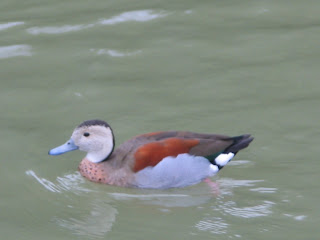 And so back to Blisworth at the end of August, where we saw our little unknown duck again. We have since discovered that it is a Ringed Teal, fairly uncommon in the UK but regularly seen on the Continent. (Thanks, Olly!)
Posted by Dave and Val Taylor at 6:41 pm No comments: