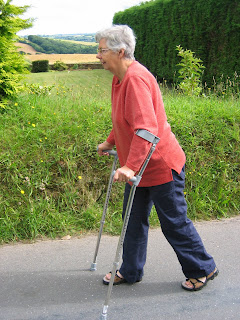 Yes, there ARE canals in both Devon and Scotland, but they are not connected to the rest of the system, so we have been driving around quite a bit since the end of June.

As you know, Val's second knee replacement operation was scheduled for 1st July, so we drove down from Blisworth to Lapford on the 29th of June, ready for Val to go in on the 30th. We stayed the night with Colin and Janet and then Dave stayed the next few days with Joe and Wendy in Barnstaple, until Val came out of hospital.

The operation went well, if anything better than the first one, and Val didn't have the same bad effects from the anaesthetic this time. She also ended up in a ward with 3 other ladies with knee and hip operations, where quite a lot of fun was had!!
So, after the expected 5 days in hospital, Val was allowed home and we went back to Lapford to stay with Colin and Jan again. And here is Val, just 8 days after the operation, getting the second knee (her right leg) into action again. Seems that this second knee h 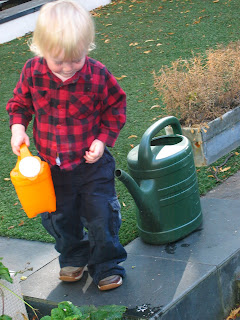 as had slightly better mobility a bit sooner than the first one, but there has been rather more pain and discomfort and a few more disturbed nights' sleep.
Overall progress was good, though, and the physios released Val after 4 weeks, as we had hoped. Shireen had invited us to come and spend some time with her up in Glasgow, so we drove up a few days later, stopping overnight with Adam and Rachel in Shrewsbury on the way. Thanks, folks, that really made a difference! We were towing our trailer with a bookcase for Shireen, one that had belonged to Dave's parents, plus a little chair which we no longer need and she should find useful. Dave had spent some time renovating the trailer while we were in Lapford, so that worked out well.
We hadn't seen Shireen and Thor since March and, as you can see, he had grown – no surprise! Here he is, 'helping' in the garden. His watering efforts were actually quite useful as Shireen was starting some containers of herbs and flowers! This is the first time they have all had a garden of their own, and it is rather empty at present, so there is plenty to do. 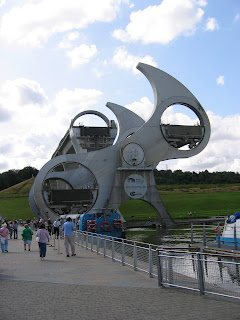 Val's knee was recovering well but of course she couldn't go running around just yet. We thought we could manage a trip to the Falkirk Wheel, though, and played at being 'canal tourists' as we took a trip in the boat and went up the Wheel, along the canal and through Roughcastle Tunnel before turning round and coming back down again. 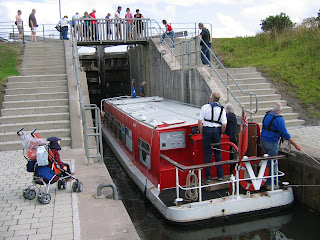 While Val and Shireen had a little break, Dave and Thor went up the hill beside the Wheel and had a towpath-side view – yes, that's Thor in the pushchair, taking an interest in a boat going up the locks above the Wheel. 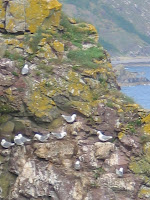 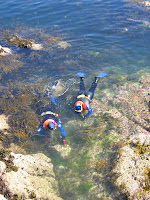 While we were up in Scotland, we took a couple of days out from Glasgow and explored some of the eastern coastline south of Edinburgh. Too late to see puffins and some of the other seabirds, but there were kittiwakes still nesting on the cliffs at St. Abb's Head and snorkellers among the rocks just outside St. Abb's little harbour. We found a nice B & B just outside Coldingham and stayed there two nights before making a long and circuitous return trip to Glasgow via the borders. 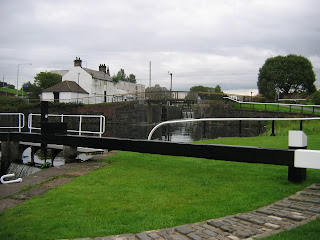 We stayed a few more days in Glasgow and Dave walked up to the Maryhill Locks on the Forth & Clyde Canal a few times. There is not much chance of us travelling along this canal in 'Zindagi', but we have toyed with the idea of trying to find a narrowboat owner who is based on the Forth & Clyde and arranging a swap for a week or two. Not sure whether that would work, but it is an idea! And then, of course, it would also be great to take the boat from Fort William to Inverness, travelling through Loch Ness . . !
Val's final appointment with the surgeon wa 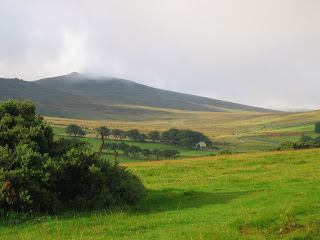 s on 26th August, so we went back to Devon a couple of days early and got routine dentist appointments out of the way. We stayed with our friends David & Mary in Okehampton and, once again, Dave enjoyed walking out onto Dartmoor, just about 5 minutes' walk from their front door. By now, Val was walking with just a stick and not really needing it all the time – good progress!
The surgeon was happy with Val's progress, and just wants to see her in 12 months time for an 'MOT' on both knees.