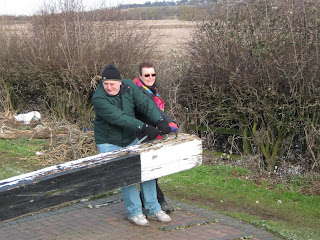 We last 'blogged' at the beginning of February, just before Joe and Wendy came to spend a few days with us. The first time they have been on board 'Zindagi', and we hope it won't be the last!
It's easy to think that we have nothing to report, as we spent several weeks at Aynho before travelling round to Blisworth, where we have been for more than a month now . . . but then, when we think about it and look at the photos, there is more than we thought! Plus you need to know that we are still afloat – we have even had an email asking if we are OK because nothing had appeared on the blog! Thanks for your concern, Cathy!
So, here we go with the first part of a mammoth catch-up . . . 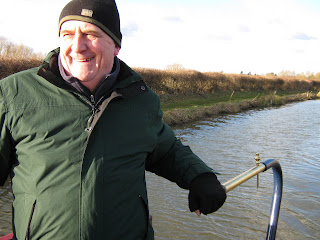 We soon got Joe and Wendy to work on the locks as we made our way 'upstream' to Banbury and on to Cropredy. The weather was cold, so a little exercise was welcome – we won't say who took almost every opportunity to nip back inside in front of the woodburner!! Joe also tried his hand on the tiller, with good success – perhaps Wendy will have a go next time!
It was great to have them on board and share our lifestyle for a few days. A taste of warmer weather next time, hopefully!
The cold winter continued well into late February, making us realise that we had not done too badly when we were out with Joe and Wendy. The causeway, bridge and lock at Aynho Weir took on a serene (if cold) beauty. 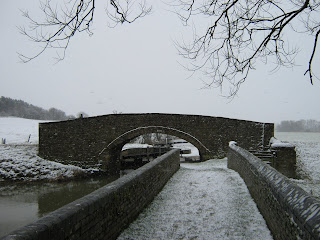 Meanwhile, we needed to make a quick visit down to Devon for Val's medication review, so we exchanged Aynho for Lapford for about a week at the beginning of March, and took in a friend's 60th birthday party at the same time.
No sooner back on 'Zindagi' than we had some more changes on board! No doubt you will remember our long battery saga back at the end of last year, when we eventually succeeded in getting Elecsol to honour their 5-year guarantee and replace our ailing batteries. But, however good the new batteries were after the misery of the old ones, we knew that we really needed greater charge capacity, especially when the colder months make heavier demands. So, Dave had been researching the possibilities, and 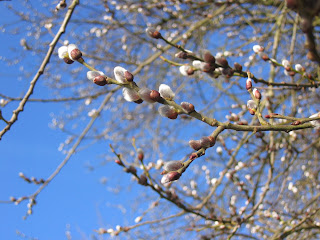 we eventually took delivery of twelve 2-volt 'traction batteries' (ex-forklift). Dave then set about fitting them. Although they occupy the same floor space as the old ones, they are much taller and have lots more lead in them – and more than double the capacity of the Elecsol ones! The extra weight meant that 'Zindagi' started listing to starboard and sitting deeper in the water to the stern, despite careful repositioning of the old batteries and sacks of coal, etc.
Not too bad, though, so we eventually set off from Aynho on 15th March, having been there since 29th January. Our objective? To get round to Blisworth and spend a week or two there before heading northeast. It seemed as though Spring was beginning to emerge from the long cold spell as the willow buds began to open, and Aynh 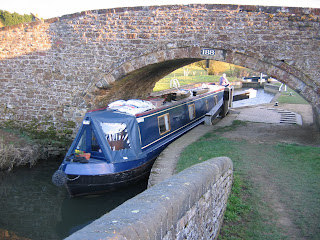 o Weir Lock looked almost summery!
We had estimated needing about 6 days to cover the 90 locks and miles between Aynho and Blisworth, but we made good progress (despite the continuing starboard list!) and arrived on 19th March after about 4 days travelling.  Val and Pete made us welcome and 'Zindagi' slipped in just two places along from where we had been last winter!
The original plan was to moor up for just a couple of weeks and see a bit more of our friends in Blisworth before moving off north-eastwards, BUT we are still here!  Several reasons, but at least it has given us the opportunity to get a few bits of maintenance done! 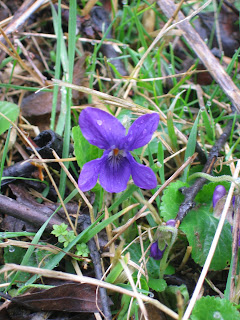 The first thing was to try to rectify the list to starboard.  To start with, we thought about just adding more ballast on the port side and the front, but that would just have set 'Zindagi' deeper in the water and so made it more difficult to manoeuvre.  The alternative was to try to remove existing ballast from the rear starboard side, so Dave carefully lifted the floor in the kitchen and found that he could take out the 'crazy paving' of concrete slabs from under the floor.  More than 200 kilograms came out in the end, and we were back on an even keel – much better!
Meanwhile, Spring was moving on and the violets started appearing alongside the canal.  We even spotted some white ones, which are apparently quite common in these parts.  Sorry, no photo of those! 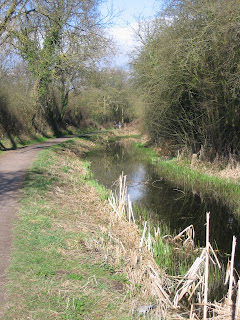 A week after we arrived in Blisworth, we drove over to see Adam and Rachel in their new house in Shrewsbury.  A very enjoyable weekend, and a lovely house – well worth all the headache and heartache involved in getting it!  Needless to say, we found an old canal there, and there are even some ideas of restoring it!  Here's a stretch of the old Shrewsbury Canal, looking very much as if a boat could come along any minute! 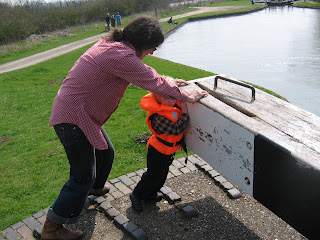 Just a couple of weeks later, we had visitors ourselves, as Shireen and Thor came for a few days.  We took the opportunity to take the boat out for a trip down towards Milton Keynes, and Thor joined in with some of the locks at Stoke Bruerne.  Most mornings, a little voice would say "we're on the boat" as soon as he knew anyone was listening!  He was very quick to realise that he needed to put on his lifejacket if he was going on deck, so there was certainly no problem there.  Thanks to Blisworth Tunnel Narrowboats for the loan of the lifejacket!
The weather was not too bad while they were with us, and it soon got even better!  A good opportunity to get some paintwork tidied up, so our light-coloured roof had a good scrub to get rid of the algae before paint repairs started, followed by some Oxford blue and bitumen black where we had scraped along the sides.  Time, too, to plant out some of the salad seedlings in the rooftop plant troughs, and replace most of the remaining (very tatty looking) pansies which had managed to survive the winter, including being encased in snow for several days.  Some of them are still OK, amazingly!
And when will we move on, and where?  The short answers are: soon and north-east – watch this space!
Posted by Dave and Val Taylor at 5:02 pm 1 comment: