Grand Union to Grand Western - in a day!

As we have become more and more involved with life back in Devon, having Zindagi moored at Blisworth has become more and more difficult to justify.  4 hours driving - exactly 200 miles - before we could start to do anything with the boat at all, whether that was maintenance (increasingly needed, 18 months after we stopped cruising) or even getting out for even a few days' cruising.  Since moving back to Devon in January 2013, we had been out for precisely one week!

Time for decisions!  We drove up to Bradford-on-Avon on the Kennet and Avon Canal and looked at possible moorings there.  OK, but that would still make a 2-hour trip to get to the boat.  Would we get to it any more often?

How about having it transported down to Devon on a lorry and placed on a hardstanding in a friend's farmyard?  Expensive for transport, but hopefully fairly cheap for hardstanding rental, and we would be able to get the maintenance done!  We enquired, but unfortunately the friends we had in mind did not have enough spare space and other possibilities came to nothing, except for one very expensive option.

Then Val thought of the Grand Western Canal at Tiverton.  Only 20 miles from home, just 11 landlocked miles of navigable canal.  We enquired and, yes, we could have a mooring.  The mooring and the licence were quite a bit cheaper than leaving Zindagi at Blisworth, but of course we still had to pay for the craning out onto a lorry, transport down to Devon and then craning in - definitely NOT cheap! 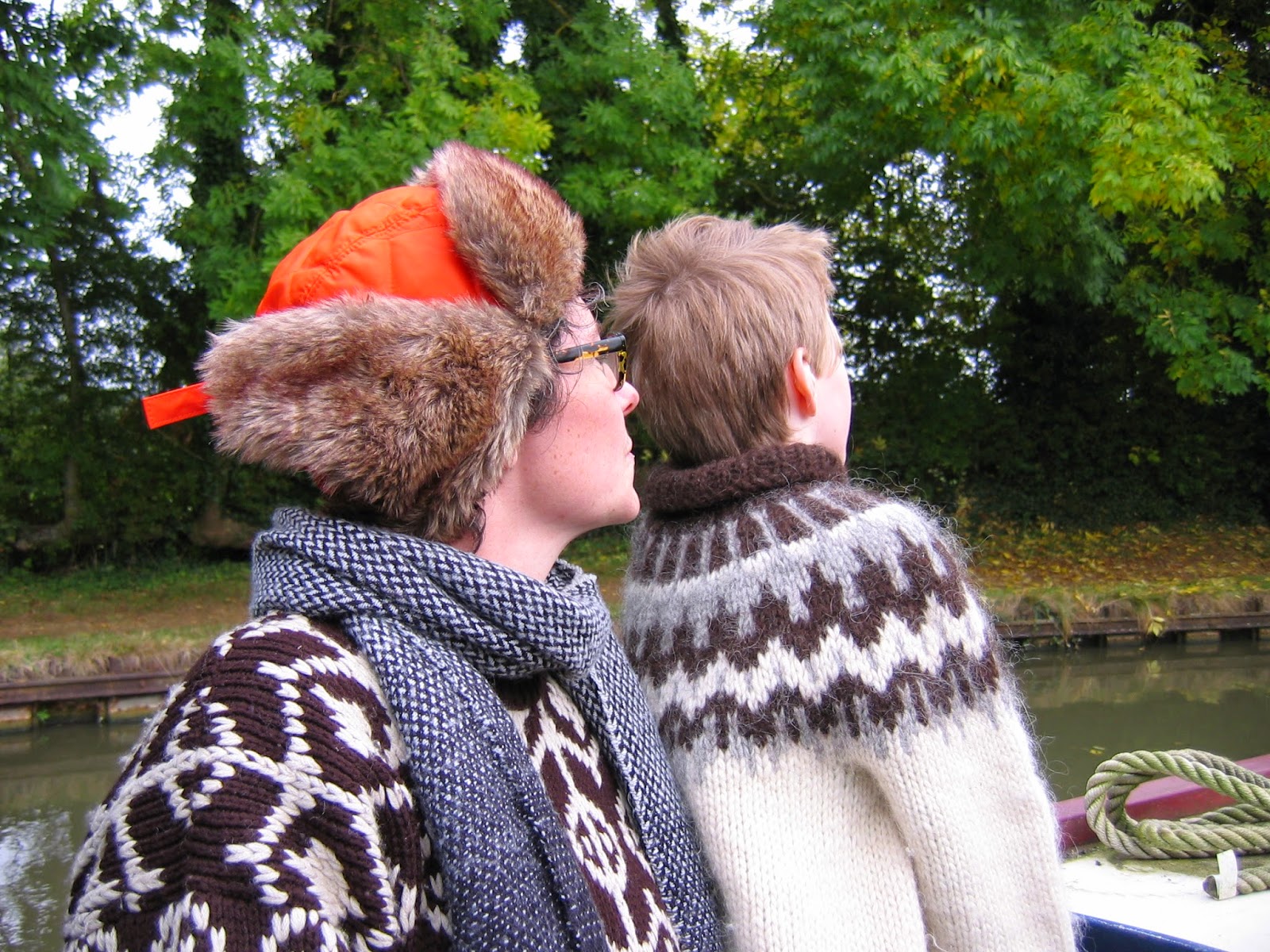 Moving day was set for 17th October, but Shireen and Thor had a half-term break before that, so they joined us for just 2 days the weekend before, and we went for a sort 'there and back' trip. 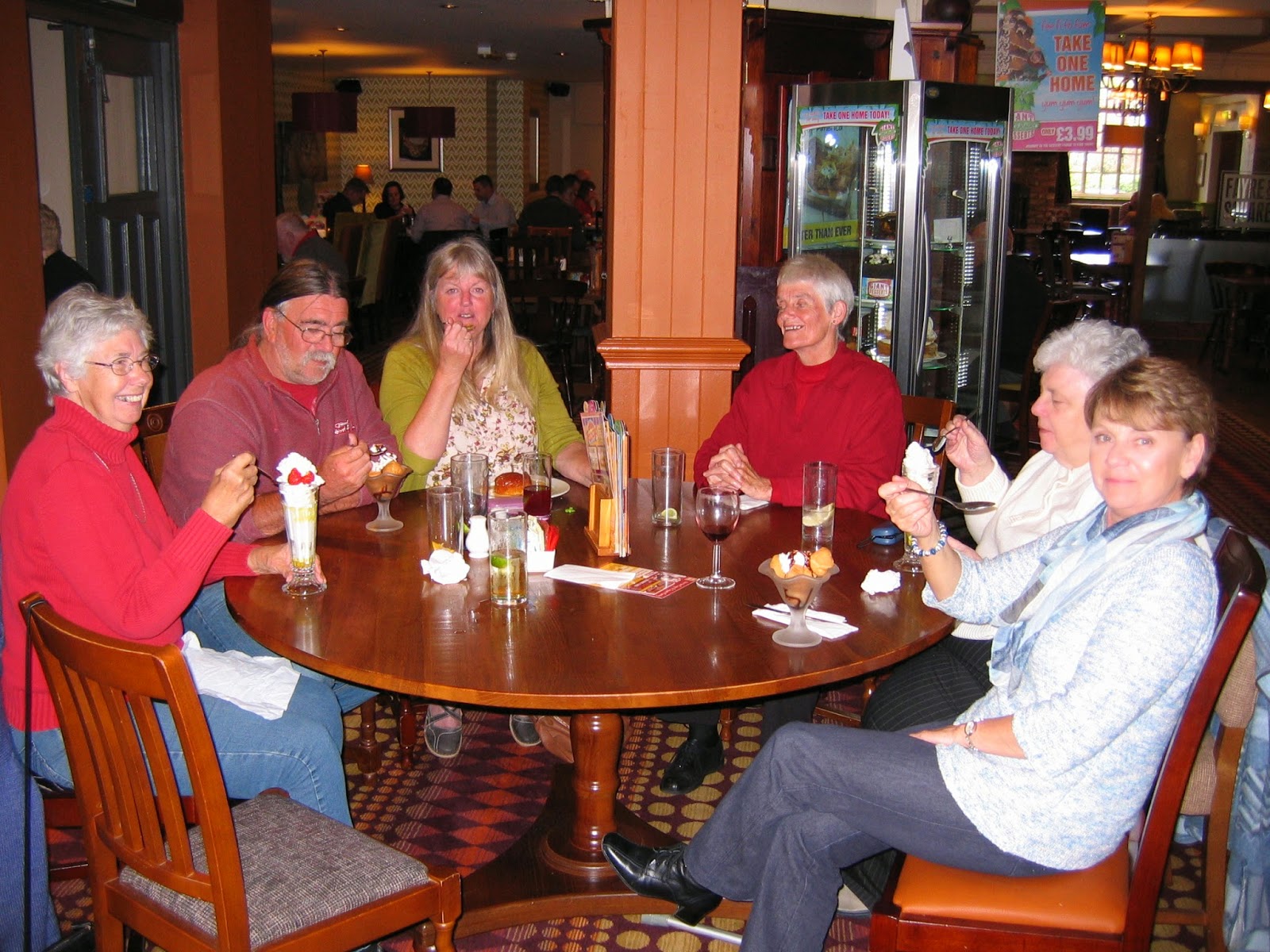 Then a few days to pack up the 'breakables' ready for the trip by road, and also to spend a little time with some of our Blisworth friends.  Here we are in the 'Queen Eleanor', Val with Alan & Jan, Mary, Sally and Dianne.  Thank you, Sally for arranging the get-together!  A little sadness at the breaking of our obvious link with Blisworth by moving Zindagi, but we feel sure that this will be 'Auf Wiedersehen' and not 'Farewell' and that we will get back for the occasional visit - and maybe get some return visits in Lapford! 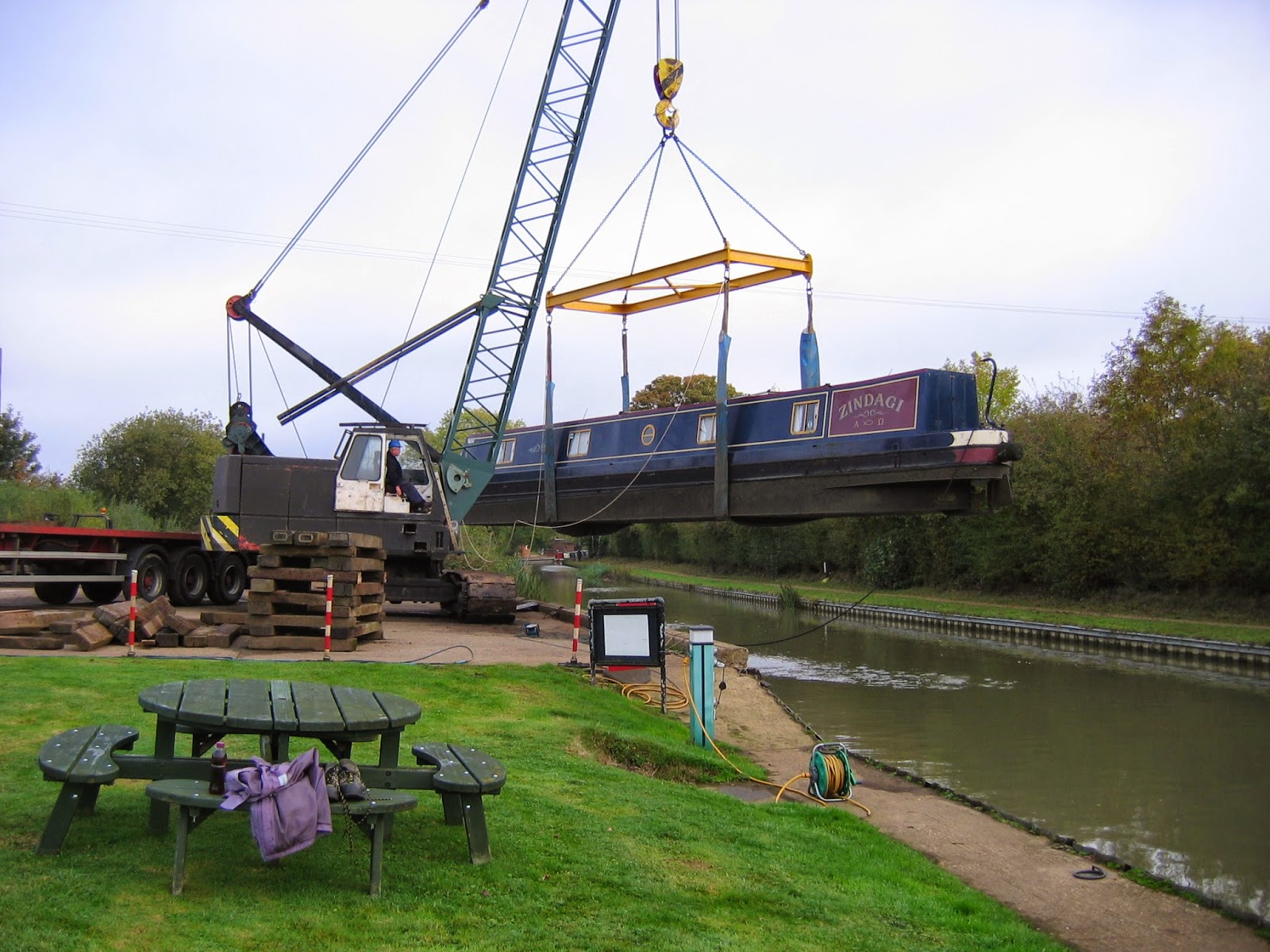 Friday 17th came, and we chugged the half mile round to Gayton marina to be craned out, as we have done twice before to get the bottom of the boat blacked, but this time it was onto a lorry! 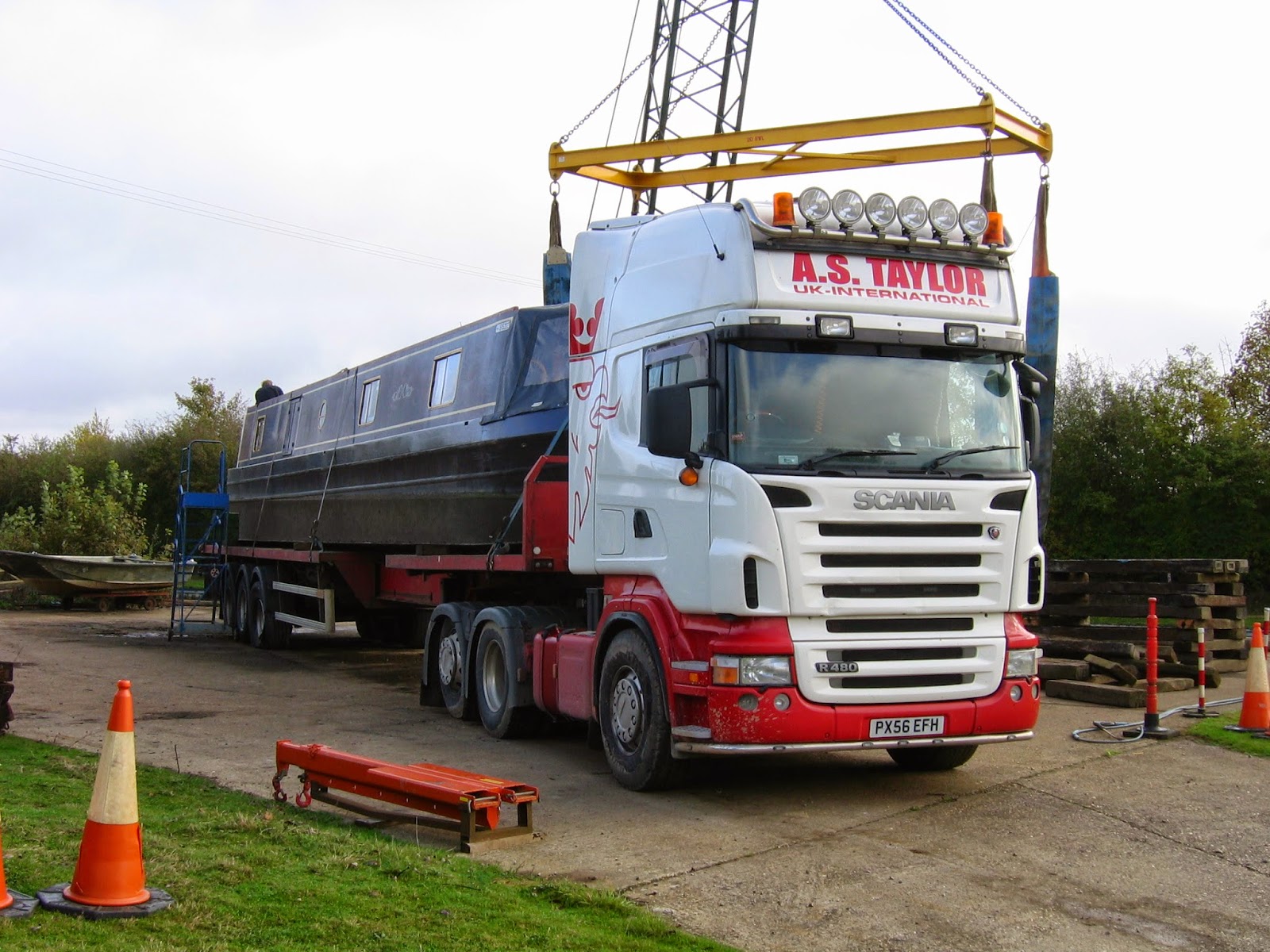 All ready to go - once the lorry driver had got a buckled wheel replaced! 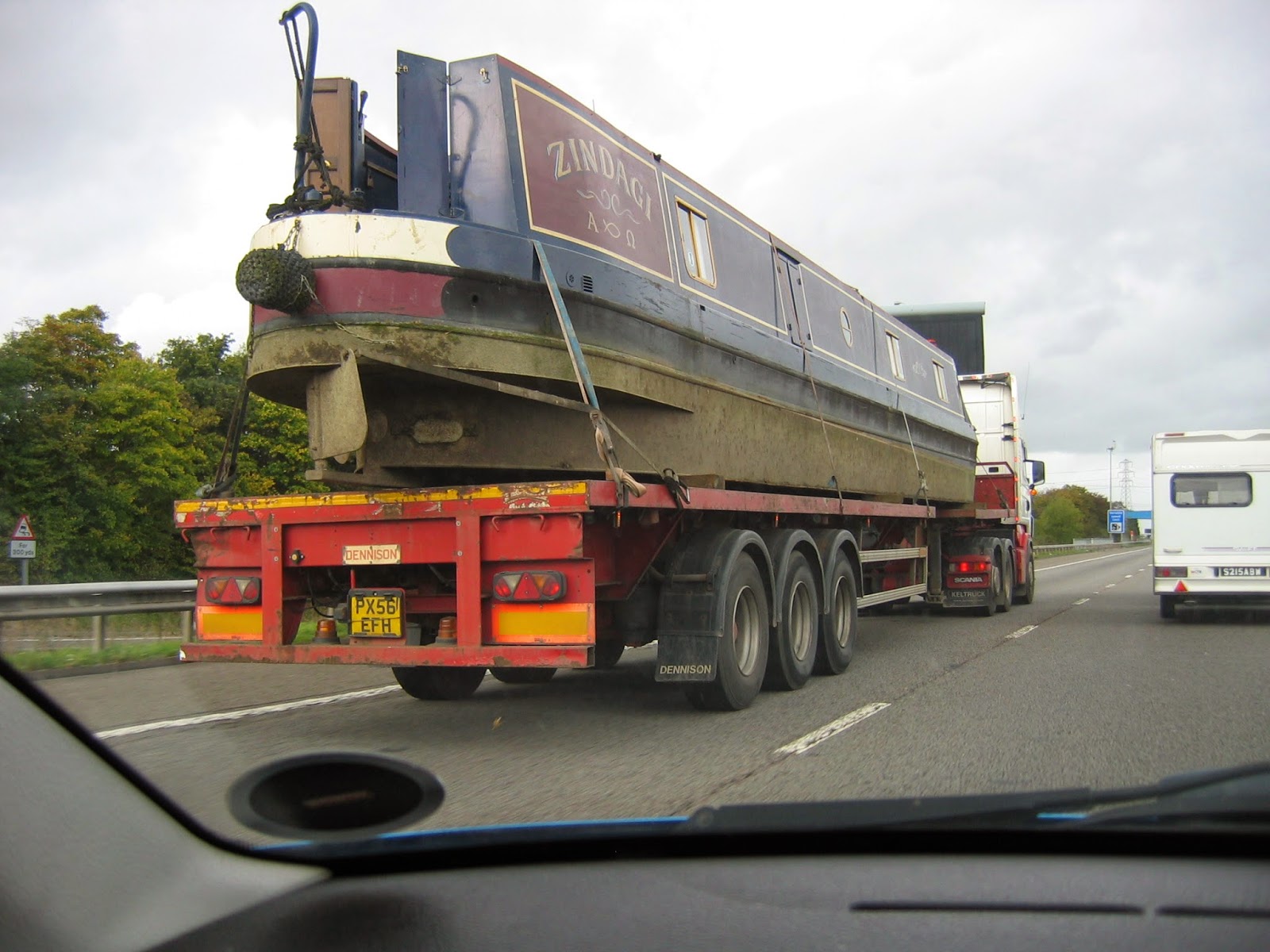 The driver told us he was taking a different route, so we had a surprise when we overtook the boat on the M4!  Quite a bizarre experience . . . 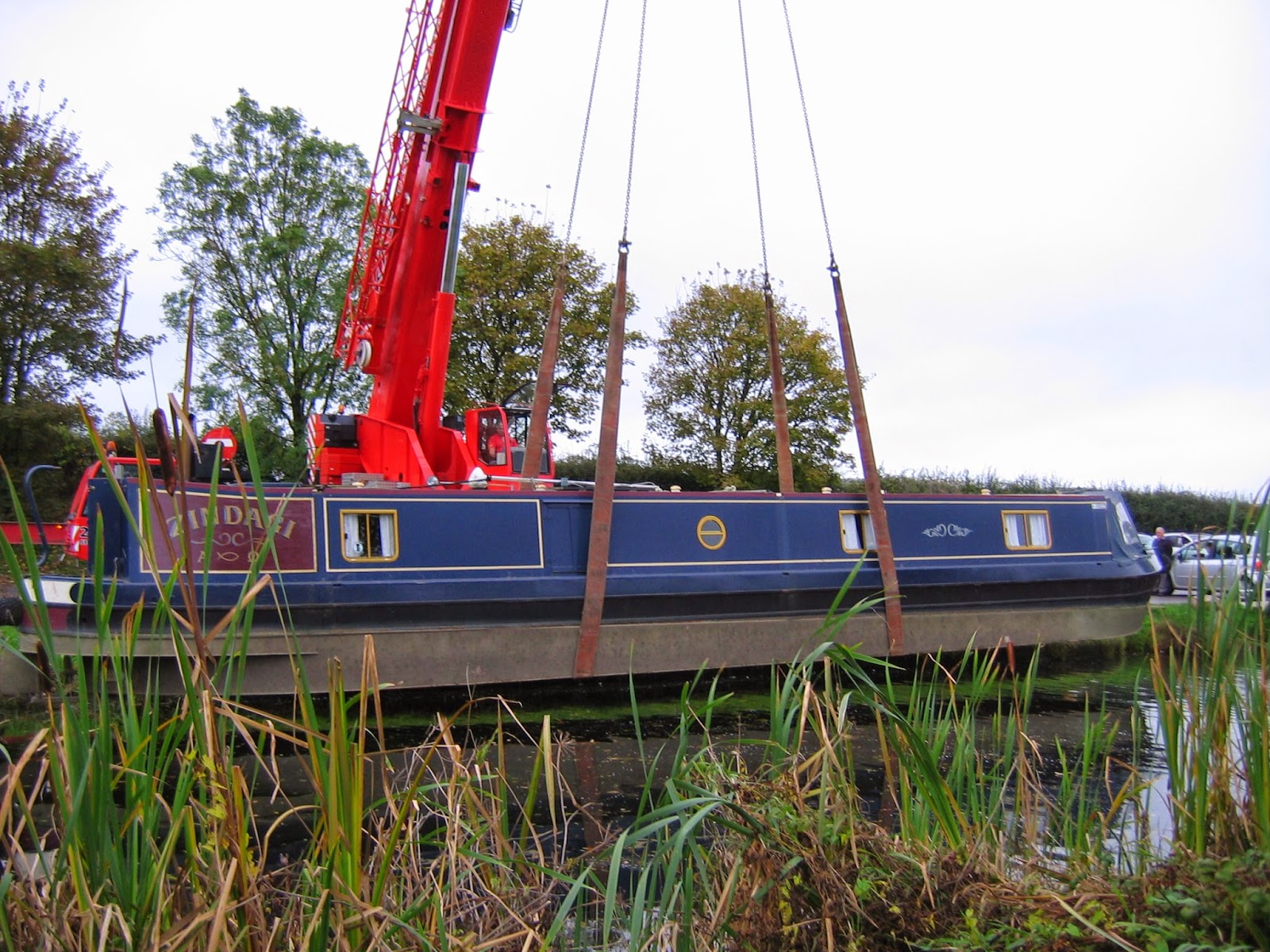 Shortly after 3 in the afternoon, and Zindagi was being craned into the Grand Western Canal near Halberton.  All had gone remarkably smoothly. 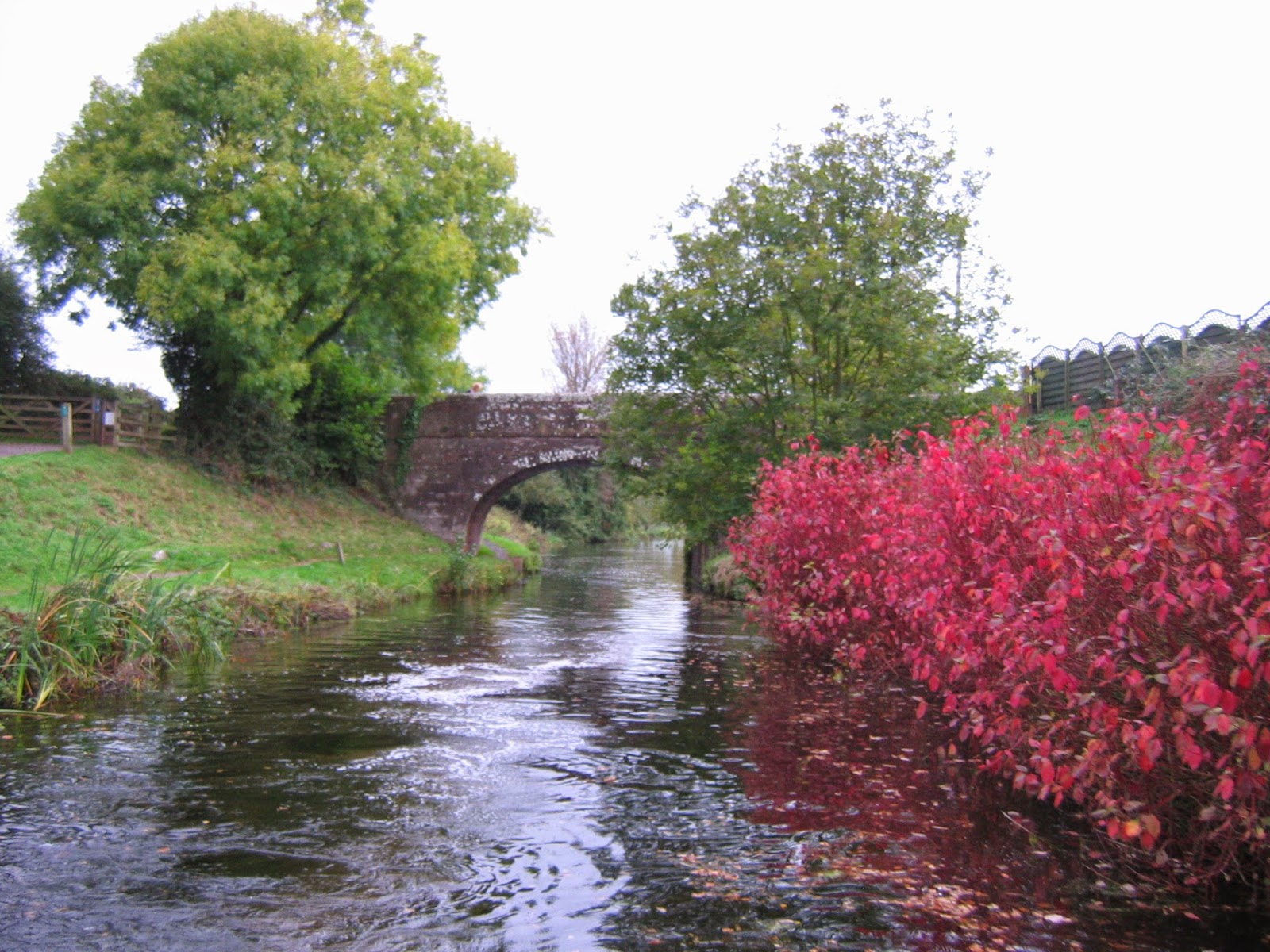 Just a short chug to our new moorings at Orchard Farm . . . 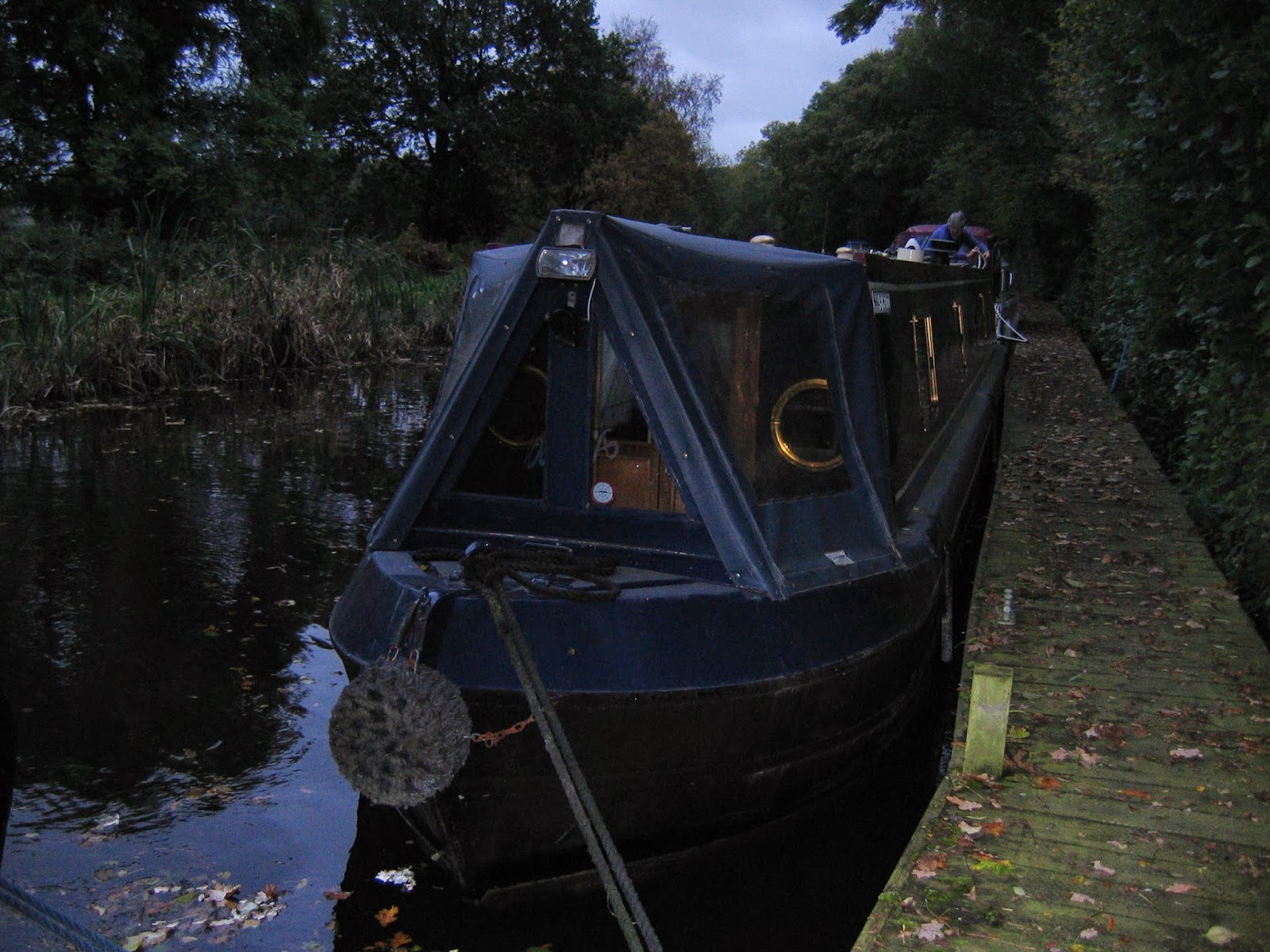 Posted by Dave and Val Taylor at 11:16 pm No comments: