Down to the Trent – and up the Soar

Back in late April, we had come through Great Haywood on our way northwards to Stoke-on-Trent, the Caldon Canal and points north.  Now, at the end of September (yes, the blog is still out of date!), we were rejoining the T&M to head back south – but by a slightly different route! 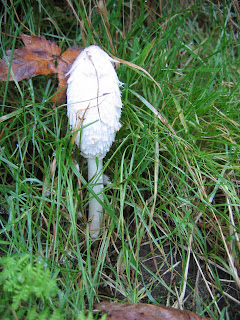 Signs of Autumn!  Well, it was very nearly October!

Having travelled generally south-east from Stoke, the Trent & Mersey takes a right angle bend near Fradley and starts heading north-east.  So, although we were travelling southwards, our route would take us northwards for quite a few miles! 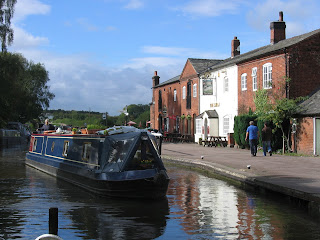 Fradley Junction and 'The Swan'.  We had arrived here from the Coventry Canal in April, joining the 'T' junction from the left of the picture.  Now we were following the T&M to where it joins the River Trent, so we passed straight on and down the locks. 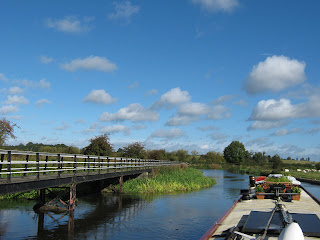 It was actually only about 2 miles before we had a brief 'brush' with the Trent.  Near Alrewas, the canal is joined by the river (under the bridge to the left of the picture) for just a few hundred yards.  Sometimes high river levels close this section, but we were OK. 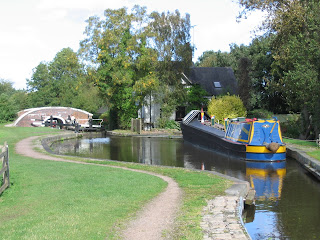 After a two-mile noisy straight section of the canal, where it runs next to the old Roman Road known as Ryknild Street (now the A38), we enjoyed the pretty surroundings of Tatenhill Lock. 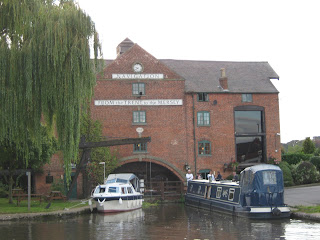 Through Burton-on-Trent and on to Shardlow.  This is the old (18th century) Trent Mill, where boats used to enter to unload.  Nicely restored more than 30 years ago, but not for commercial boat traffic, it is now a pub! 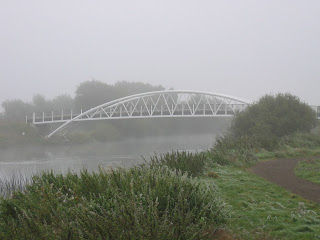 Just a mile and one lock further on, the River Trent joined us from the south under this new bridge, built to replace the original 'Longhorse Bridge', which actually crossed the river from the point where the photo was taken!  This is a real '4-way' junction, as the canal comes from the west, the (un-navigable) River Derwent joins it from the north (directly opposite the Trent) and then the waterway continues eastwards under the M1 towards . . . 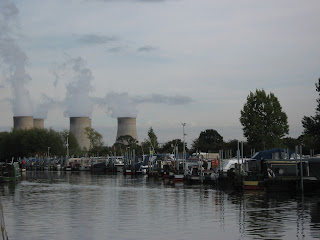 . . . Sawley Marina, with the cooling towers of Ratcliffe-on-Soar power station beyond.  This busy marina is on a 'cut' separated by flood locks from the main flow of the river.

About a mile further on, we passed an even more complex junction – the 5-way junction at Trent Lock, where the Erewash Canal branches north, the River Soar joins from the south, and both the Cranfleet Cut to Nottingham and the River Trent head off eastwards.  Again, this can be hazardous in high water conditions, especially as the flow of the two rivers tends to push boats towards the Trent, which immediately plunges over the large Thrumpton Weir!  Water flow was OK as we went through, so no problems – apart from one crazy boat skipper who came down the Soar MUCH too fast, creating a potentially unsettling wash! 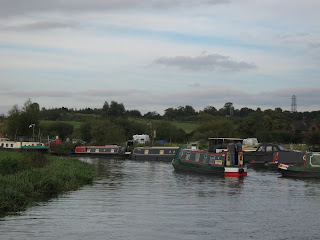 Entering the Soar Navigation, we were reminded again of its endearingly quirky character, almost as if we had stepped back in time, with simple rural boatyards and boats of all shapes and sizes. 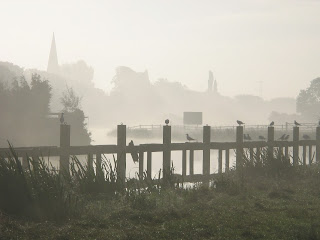 A misty morning near Zouch (apparently pronounced 'Zoch'), with seagulls on the emergency moorings and the spire of Normanton-on-Soar on the skyline.

We were definitely in 'dawdling mode' now!  We were due back in Blisworth in early November, and it was now early October – lots of time!  We had allowed for possible delays caused by high river levels but so far had faced no problems.  But we were still on a river and were reminded by the level indicators that the Soar WAS a little high – in the amber, not the green, and sometimes very close to being in the red! 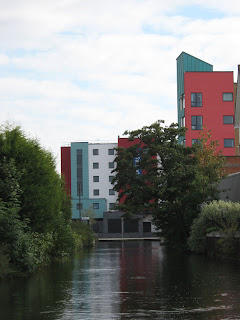 Loughborough, though, sits on a 'canal' section.  We needed to do some shopping, and so chugged into the Wharf (with the brightly painted Travelodge!), then turned around and moored up slightly further out of town. 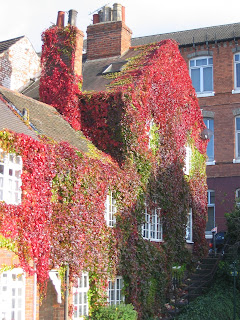 Virginia Creeper climbing up a house with two ground floors – one at towpath level, the other level with the road as it crosses Nottingham Road Bridge. 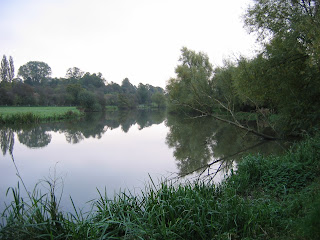 Back on the river 'proper', and the Soar looking its tranquil self – but the weirs were still running well! 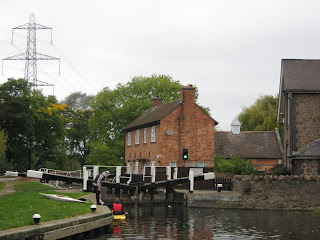 Looking back to Barrow Deep Lock.  The green light confirms that the river section below is safe to navigate.  Just as well – we had just come off it! 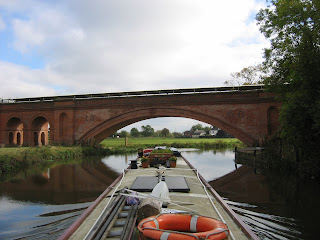 On to Mountsorrel and under its impressive brick 'conveyor' bridge (1860). 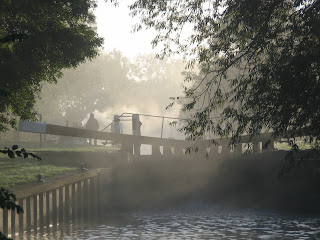 Junction Lock, near the junction of the Melton Mowbray Canal and Oakham Canal, closed in 1877 but with some recent talk of restoration. 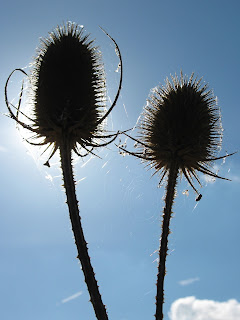 We planned to travel through Leicester in one day, and so stopped north of the city, near Syston, at the Hope and Anchor pub.  We enjoyed Sunday lunch after a walk in the nearby Watermead Country Park – with some very photogenic teasels!
Posted by Dave and Val Taylor at 9:19 pm No comments: