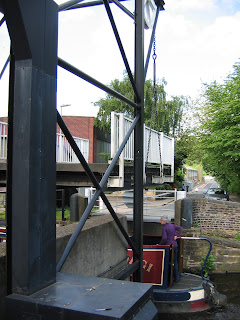 As soon as we heard that the River Calder was navigable again, we 'set sail' from Huddersfield, under this unique lifting bridge, the Turnbridge Loco Liftbridge (1865).  If you click on the picture to enlarge it, you may see that the whole road section is lifted vertically by its own crane while the boat passes underneath.  Nowadays it is electrically operated – it used to be wound by windlass.  No wonder it's called a 'Turnbridge'! 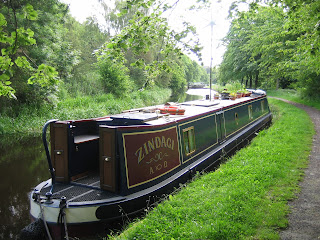 Just a few locks and miles out of Huddersfield, we moored up for the night on the Huddersfield Broad Canal.  We had been through our last narrow locks for quite a while!  We joined the River Calder (Calder & Hebble Navigation) at Cooper Bridge, and were glad to find the river level was comfortably down – no problems! 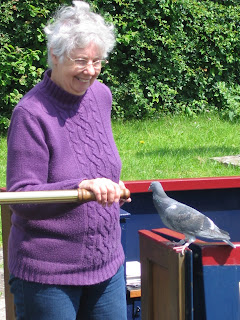 We had a little surprise near Battyeford, when a fluttering noise announce the arrival of a temporary passenger!  This racing pigeon hitched a lift with us until Mirfield.  He was hand tame and seemed uninjured – maybe just a little tired or disorientated? 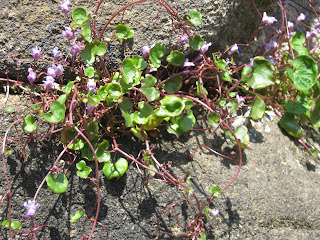 Ivy-leaved Toadflax in a lock wall near Wakefield. 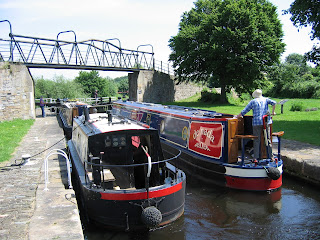 The Calder and Hebble joins the Aire & Calder at Wakefield's 'Fall Ing' Lock.  (An 'ing' is a water-meadow).  After quite a delay with an earlier boat coming up, we fitted three narrowboats in with no difficulty, though the nearest one lives up to its name – 'Dinky'. 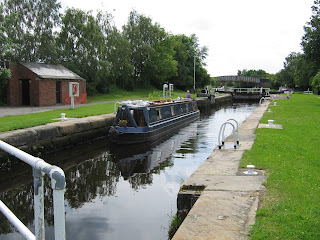 We stopped for lunch and so had a later lock all to ourselves, but this gives you an idea of normal-sized locks on the Aire & Calder – 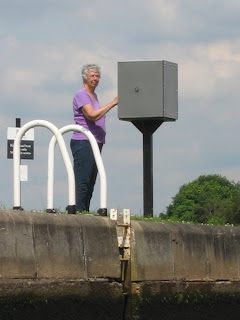 but no hard work is involved, just pressing buttons!  They are all mechanised with electrically-operated hydraulics. 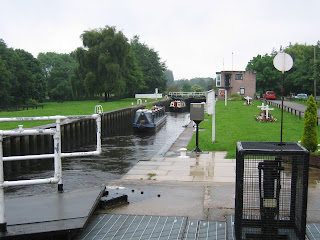 At Castleford, where the Calder joins the Aire, we passed 'Dinky' again as he was setting off after shopping.  We waited for him at the gigantic Lemonroyd Lock and moored above for the night.  Here we are at Woodlesford Lock the next morning – about the same length but only 7'6" deep instead of 13'6". 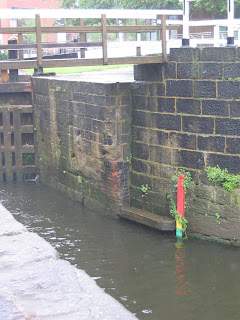 The few miles up to Leeds were a bit of a race against time, as it had been raining through the night and we knew that the River Aire gets fierce when rain falls in the Dales.  Fortunately, all the river level indicators at the locks were 'on green', including this last one where the Leeds & Liverpool Canal turns off the Aire.

The next day, after more rain, the river was totally un-navigable, not quite a raging torrent but heading that way.  With later news of floods in Yorkshire and on the Rochdale Canal (upstream on the Calder) we were very glad that 1) we had made it safely onto the L&L in time and 2) that we hadn't opted to cross back over the Pennines via the Rochdale this year – we had talked about it as a possibility!
Posted by Dave and Val Taylor at 6:26 pm 1 comment: