Cambridge and the Lodes 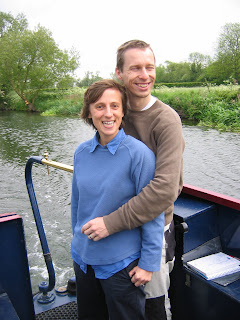 Sorry for the long delay in posting news here on our blog. We have been in such remote areas that our mobile internet signal has been very poor. This means that uploading to the blog is VERY slow, sometimes almost impossible, so we have not been able to keep you up to date as well as we would like to.
In our last episode, we had just returned to Ely and were about to head up the Cam to Cambridge. The journey continues . . .
In cruising up the Great Ouse and down again, we had already passed Pope's Corner twice, where the River Cam flows into the Ouse. Actually, at this point, the Cam looks like the larger river whilst the Old West River (as this part of the Great Ouse is known) looks much smaller. Probably most of the water flowing down the Great Ouse from further upstream flows straight down the tidal New Bedford River from Earith to Denver, leaving only a comparative trickle to flow down the Old West!
Anyway, now we were heading back up from Ely to Pope's Corner and, this time, turning left up the Cam. We had arranged to meet up with Stuart and Charlotte, friends of ours who have just moved near Cambridge. At last, we were in the same area as each other! 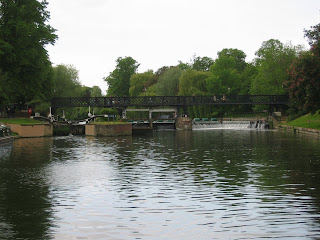 We found the same transformation with the River Cam as we had seen on the Ouse. From Ely and up past Pope's Corner it was still the same fenland riverscape - high flood banks, sometimes not very interesting. From Bottisham Lock, once again the river changed:- the flood banks soon disappeared and we could see the surrounding countryside for some distance. Then we started coming into the outskirts of Cambridge, and moored up at Waterbeach, where Stuart and Charlotte joined us and stayed overnight, ready for the next day afloat.
The next morning we set out towards Cambridge. Even before going up Baits Bite lock, we encountered rowing crews out for their Saturday morning training, and the 'traffic' became denser as we headed towards Jesus Green (photo), which was as far as we could go. We filled up with water, turned around and moored up for lunch. Clint and Becky (more friends!), who live a few minutes' walk away, popped in with little Millie for a short visit, but then we needed to head back downstream and moor out in the countryside and Stuart and Charlotte needed to do some running training, so we dropped them off about 4 or 5 miles from their home so they could run back! 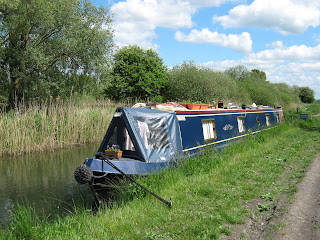 We headed for Upware, where the lock gives access to three 'Lodes', leading to Reach, Burwell and Wicken. (A lode is apparently a medieval word for a waterway which has been retained in this part of the world). Reach was the one we aimed for first. Although the water level was perhaps a little higher than the Cam, so we could see a bit more of the miles of fields around us, the lode itself was very straight and increasingly shallow. Progress was slow, and the end of the lode was a disappointment. The map showed mooring there, with some access to the village, but when we arrived we found that the mooring was almost non-existent and another boat completely occupied it! There was no-one on board, so we didn't feel free to tie up next to it and so turned around and headed back to the moorings near the junction of Wicken Lode. The next morning, we decided to chug up the short and very narrow Wicken Lode, and enjoyed the mooring there and lunch in the café at Wicken Fen Nature Reserve.

Then back to Waterbeach on Sunday night, ready for a quick dash down to Devon! At very short notice, we had heard a couple of days earlier that Val had a 'pre-op' appointment at Barnstaple on the Tuesday. At first we thought it would be impossible, but thanks to coach bookings on the internet and kind permission from the Cam Conservators to stay a bit longer on the moorings, it was suddenly 'do-able'. Stuart and Charlotte made it really easy for us by giving us lifts to and from Cambridge, where we caught the National Express bus to Northampton. A local bus took us to Blisworth, where we collected our car from its temporary home in Jim & Beryl's forecourt and drove down to stay with Joe and Wendy for a couple of nights. 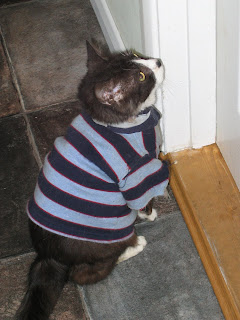 The pre-op appointment was fine, and Val was given a date of 1st July for her second replacement knee operation. That date suited us just right, as it would give us enough time to finish all the exploring we wanted to do on and around the Great Ouse and get the boat back up to Blisworth, ready to drive down to Devon for another longer stay. Our heartfelt thanks to Joe and Wendy for making us so welcome again - we really appreciate it. Here's their cat Sox, waiting patiently (?) outside the kitchen door while his food is being prepared. The reason for the T-shirt? He has a chronic skin condition, and it stops him scratching it raw. Gets a few funny looks, too!

Then the whole trip in the opposite direction and we were ready to resume our travels on the Thursday morning! A brief trip up to Cambridge to fill up with water, then back out to the Lodes again. This time we went to Burwell, where it was possible to moor, and then we headed back to Wicken and enjoyed a couple more nights there.
We needed to start heading back down to the Great Ouse, but we had left ourselves a few little excursions on the way . . .
Posted by Dave and Val Taylor at 5:05 pm 1 comment: