When we moved 'Zindagi' to the Grand Western in October 2014, one of our main objectives was to be able to do some maintenance work without needing to travel 4 hours + each way to get to the boat.  Well, we have managed to get some work done, but we have also enjoyed a little travelling on the canal. 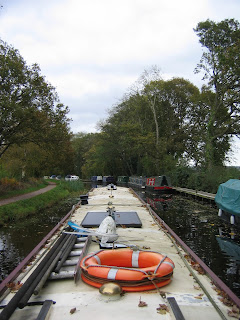 Just a few weeks after we arrived, we took two days out and went pretty much as far as we could!  Well, there are only 11 navigable miles, and we can't even do all of that as there isn't room for us to turn at the end!

So, leaving the moorings ... 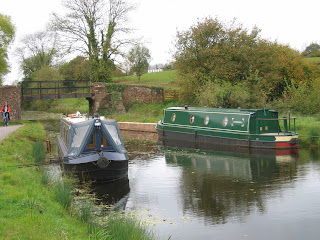 We chugged to 'Swing Bridge' (which isn't a swing bridge - I wonder how long ago it used to swing?) and walked into Halberton, knowing that the Barge Inn served meals - we had eaten there once before when exploring the canal on foot.

Well, no meal there this time, as they no longer had a chef, so it was back on board and chug on to the Globe at Sampford Peverell, 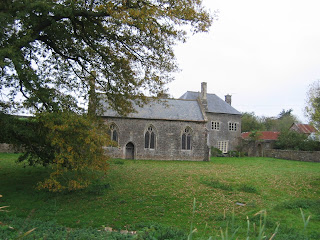 After a pleasant meal there, slowly on and past the little chapel at Ayshford Court, 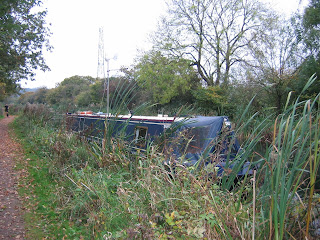 and then we moored up for the night after Ebear Bridge but before we got too close to the railway line.  Nice to enjoy the old routine of the evening, night and morning on Zindagi again! 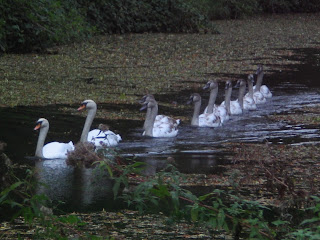 Dave's morning walk took him past Fossend and Fenacre Bridges, seeing this impressive brood of 8 cygnets, all apparently in fine fettle - as well as their parents! 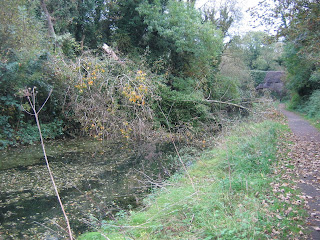 And as far as Whipcott bridge, where a fallen tree would prevent even small craft going further.  That was beyond our furthest turning point, in any case, so we were not expecting to take Zindagi that far.

We had been told that there was an inlet just north of Great Fossend Bridge, which would be OK for us to turn in, so we went through the bridge and were just beginning to turn into the inlet when we ran aground in mid-channel!

Not a good sign, so we decided to reverse to just south of the bridge in the hope that we would be able to turn there.  We did, but with just about 4 inches to spare!  At 57 ft long, Zindagi is probably the longest boat on the canal . . . 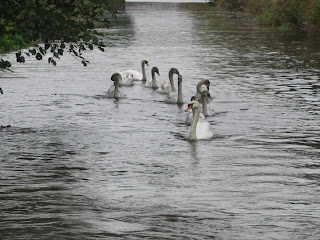 On our return journey, the swan family followed us some of the way. 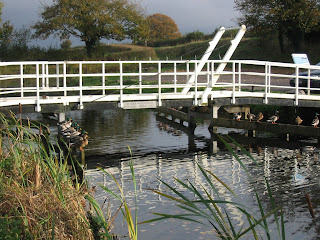 Back to the Lift Bridge at Tiverton Road Car Park - where we had been craned in a few weeks earlier - ducks all lined up as a reception committee. 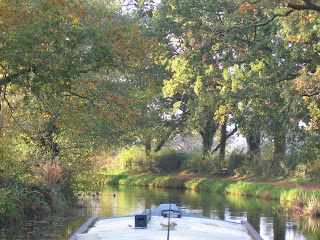 Then past the moorings and on towards Tiverton, where we turned at Tidcombe Bridge.  We probably need to look at the canal on foot before we venture any further into Tiverton on board - the information we have been given on winding holes (turning spaces) does NOT include the maximum length of boats that can turn!

Then back to the moorings after an enjoyable 2-day trip.

A pleasant introduction to Zindagi's new home!
Posted by Dave and Val Taylor at 1:30 am