To Stratford and the Avon!

Just about the only part of the UK waterways system that we had not yet visited was the Warwickshire Avon, from Stratford to Tewkesbury. We had thought about nipping in at Tewkesbury when we were going up the Severn in early October last year, but decided to try to get there in the summer months, and pencilled it in for 2011. So, after a couple of weeks in Blisworth, we set off in early July. 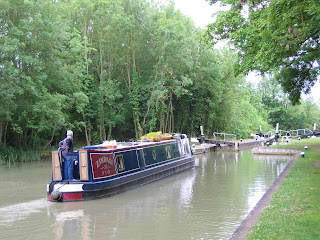 We needed to take a familiar route to get there. Up the Grand Union to Norton Junction, on to Braunston and Napton and then DOWN the Stockton locks before going UP the (in)famous flight of 21 at Hatton near Warwick again. Here we are, going down the Stockton flight . . . 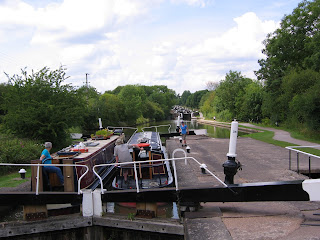 . . . and sharing a lock about halfway up the Hatton flight – see some of the others in the distance! We were really glad to find another couple going up at the same time as us – sharing the work is easier and faster! 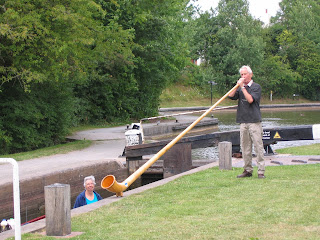 We had an unusual welcome as we started down the narrow locks on the Stratford-upon-Avon Canal. The gentleman with the alpenhorn said that he was from the Swiss Midlands but had lived in the English Midlands for many years. He liked to play the horn here as the lock and the landscape gave him good resonance! 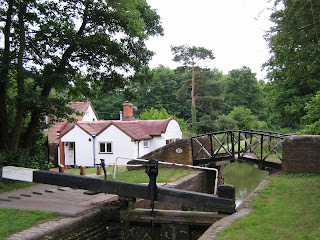 Narrow locks, split footbridges and barrel-roofed lock cottages – with those three factors together, we couldn't be anywhere else but on the Stratford! One story is that the barrel roof design resulted from using the timber formers (which had been used to construct the canal road bridges) as the main roof timbers when they came to build the cottages. The split footbridges allowed the tow rope to slip through without having to detach the horse from the boat. 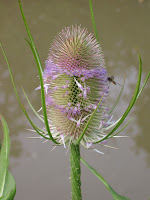 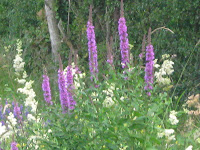 All along this canal, the purple loosestrife and meadowsweet seemed to combine in colourful bunches along the banks, often interspersed with teasels in flower – this was mid-July. 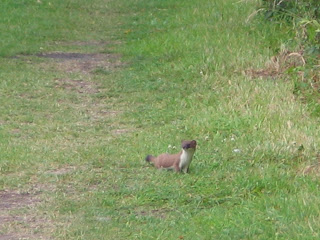 Another welcome sight, a stoat on the towpath. We have seen a few of these on our travels and they always seem so active – and playful! 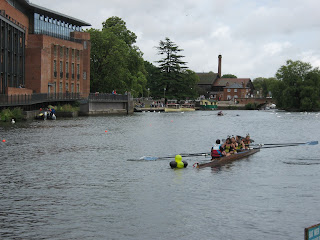 And so to Stratford! The day after we arrived and moored on the river, there was a 'Fun Regatta', including this crew dressed up as bees! 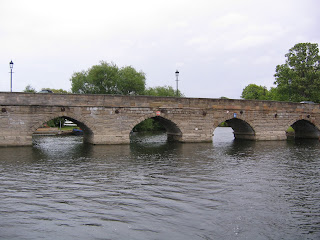 Before going down the river, we decided to explore as far as we could go upstream. Under the Clopton Bridge (15th century) and north-east, we had about 1½ miles of river before the last place wide enough to turn around Zindagi's 57feet. By then, it was getting a little shallow as well! 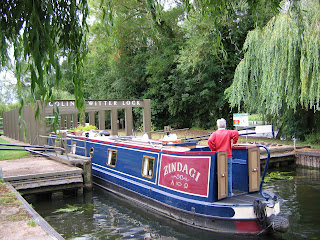 Then downstream the next day and into our first Avon lock, with its unusual steel framework – to resist distortion by 'high ground pressures', apparently. 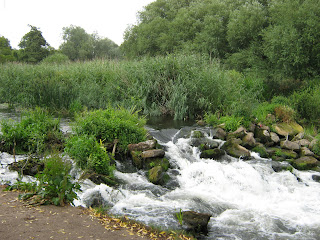 Lunchtime at Luddington. A quiet spot with a few moored boats, the lock and a gloriously tumbling weir. 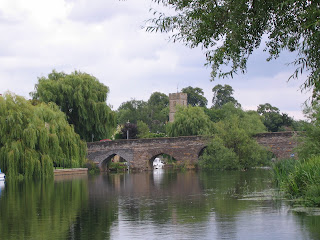 The river at Bidford-on-Avon. The bridge dates from 1482. 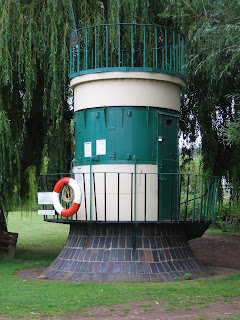 It looks like a lighthouse and it's even nicknamed 'The Offenham Light', but it's actually a flood-proof lock-keeper's hut at Offenham Lock. A reminder that the Avon is prone to sudden floods after heavy rain. Fortunately we avoided any of that! 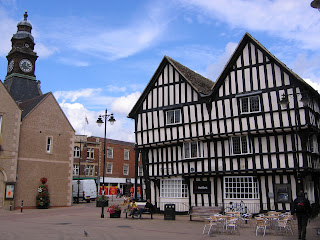 We enjoyed a walk around Evesham, doing a little shopping and looking at some old buildings. Here at the market place is Booth Hall (late 15th-C) with the bell tower of the town hall. 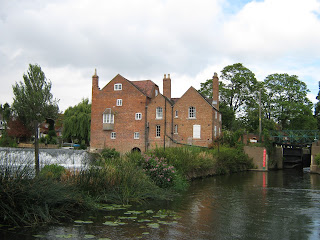 As we chugged on downstream, we passed Chadbury and reached Fladbury with its mill between the weir and the lock. Seems like the Avon was once well supplied with water-mills! 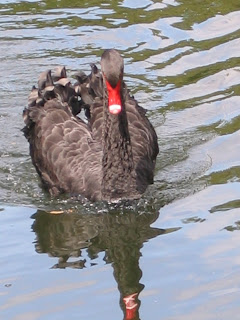 Then, as we came close to Wyre Piddle, we were met by a solitary black swan, apparently nicknamed 'Boris' (as we found out later). 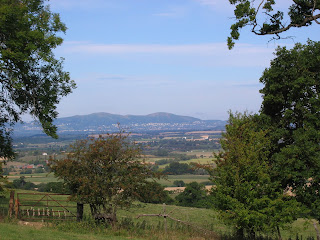 For the last few days we had seen Bredon Hill looming up to the south of us and the Malvern Hills over to the west. We took the opportunity to moor at Great Comberton and walk up Bredon Hill, where we could look over the plain to the Malverns. 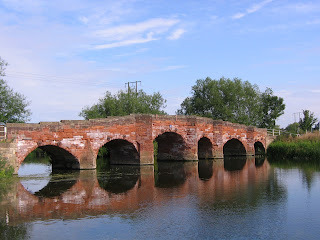 Downstream from Great Comberton, we passed under Eckington Bridge, which dates from the 1500s and is still in constant use for all sorts of road traffic . . . 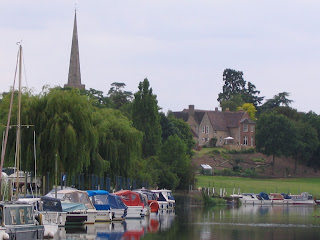 . . . and then on to Bredon village with its line of boats that we had often seen from the M5 motorway. 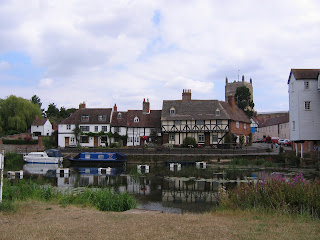 Tewkesbury is where the Avon flows into the Severn – in two channels! This is the 'Mill Avon', with the old mill on the right, and a few boats moored (they can't go any further downstream) . . . 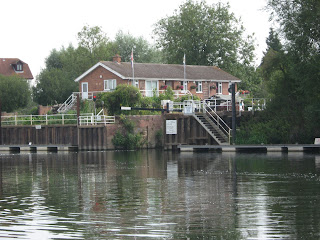 . . . so we came down Avon Lock and into the short reach leading into the Severn.
Dateline: July 28th – sorry we are still 'blogging' so far behind!
Posted by Dave and Val Taylor at 11:33 am 2 comments: