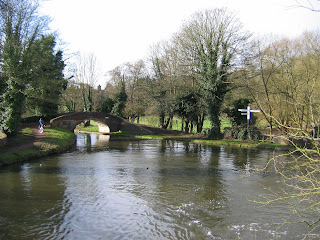 1976 seems a very long time ago (it is!) but around this time of year we were finalising the booking for our first canal holiday at the end of September. We had no idea that it was going to be one of the hottest and driest summers on record. In the mid to late summer the hire company told us that 'our' boat, along with all the others from their Wootton Wawen base, would be moved to a different location. So it was that our first canal trip started at Great Haywood in Staffordshire, down to Stourport and back in a week – with a 3-year-old, a 1-year-old and Mike, a single friend of ours. It rained every day! 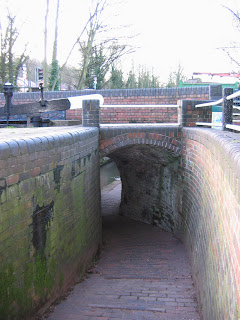 More than 31 years later, we arrived back on the 'Staffs. & Worcs.' at Stourton Junction and turned left for Stourport. As you can see, the weather was much better, in spite of the fact it was February. Soon we began to see some of the special characteristics of this canal, like the way the towpath often dives into a tunnel under the bridge below a lock. 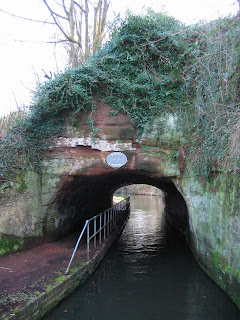 A ridge of soft red sandstone runs down much of this canal and sometimes (like here at Dunsley) the canal 'navvies' had to tunnel their way through it. 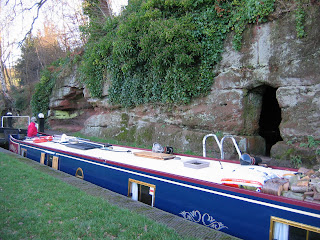 In other places, like here at Debdale lock, the rock was carved out to make caves for stables.

And all the time, as we chugged slowly south, the canal dropped down lock by lock towards the River Severn. Beautiful scenery, and incredible weather for early February! 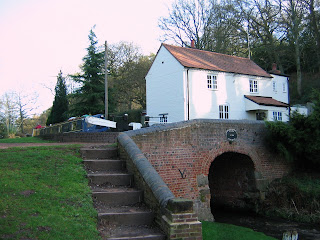 Other little features of this canal include iron split bridges at many locks. We first saw these on the Stratford-on-Avon Canal last year, but these are made to a different pattern. Same idea, though – to be able to cross the lock but also allow the horse's towing rope to pass through. And many of them still in excellent condition, well over 200 years later. 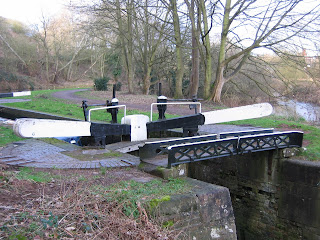 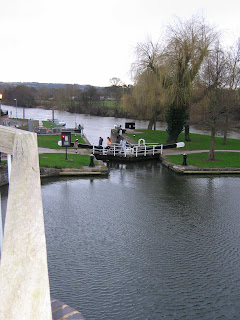 We reached Stourport on February 2nd and spent a couple of nights there before turning round to head back northwards. We had not planned to go on the Severn and could not have done so anyway, as it was still in flood after the heavy rain. It was good to see Jeremy when he visited us there. 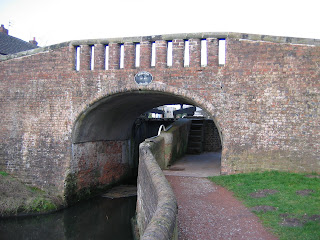 Travelling back northwards, we soon passed Stourton and found ourselves on 'new ground' again. We climbed through unusual locks, like the 'staircase' at Botterham and the Bratch flight near Wombourne, rising 20 and 30 feet respectively, and this distinctive one at Awbridge. 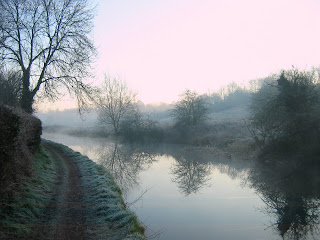 As Adam's girlfriend Rachel lives in Wolverhampton, we had arranged to meet them there as we passed through. We went out for an Indian meal together and left Boo, Rachel's ferret, curled up cosily in front of the woodburner. By then, the weather was still remarkably good, but not summery – morning mistiness near Compton! 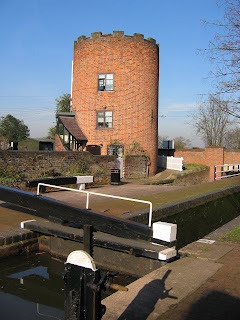 Some parts were vaguely familiar after 30-odd years, but some were too distinctive to be completely forgotten, like the Round House at Gailey, where the ancient Watling Street (A5) crosses the canal. The lock-keeper could see boats coming from either direction and so could prepare the lock as needed. No such luxuries for us, of course – we have to work our own way through – and now we we had started going downhill again towards the Trent and Mersey Canal. 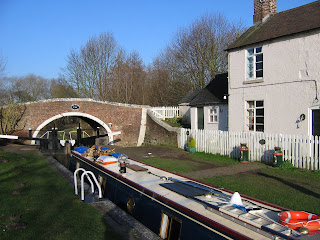 Not much further on, we came to Tixall lock, the first lock we ever worked through. The bottom lock gates even had the date on them – 1976, would you believe! These are probably the oldest lock gates we have seen, as most have been replaced in the last 20 years or less. 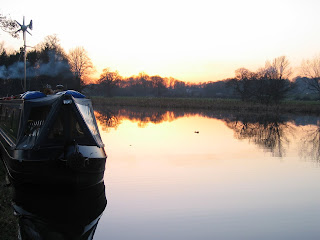 Then out into Tixall Wide, where the canal briefly becomes a lake before joining the Trent and Mersey Canal at Great Haywood. Our journey from Stourport had taken us 8 days, nice and leisurely. Back in 1976, we did the whole return journey in a week!
We have moved since then, but we'll tell you about that next time . . .
Posted by Dave and Val Taylor at 8:52 pm 1 comment: