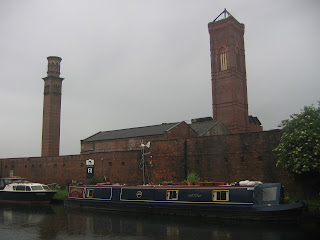 Having got off the River Aire just in time to avoid the late June floods, we sat in Leeds for a day and a half, at this very secure mooring site.  It was so secure that we could only get to it by boat or by walking through the business premises behind it, but only during working hours, of course.  We never did discover what the two towers had been - the buildings surrounding them are all being rebuilt or remodelled. 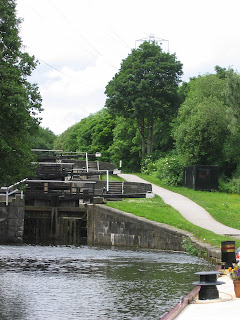 The received wisdom is not to stop overnight between Leeds and Rodley - there have been some incidents, apparently!  But, just as when we came this way in 2008, we saw no-one except other boaters, the occasional walkers and cyclists, and the lock-keepers who are on hand to assist through the flights of 3 'staircase locks'.  These are Forge Locks, near Kirkstall. 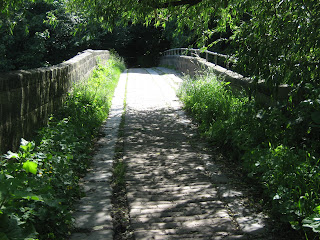 At Rodley, we walked over the old Calverley Packhorse Bridge and saw that the Aire had already calmed down a bit.  This Grade II listed bridge was built in 1775 and used to be the only river crossing for many miles. 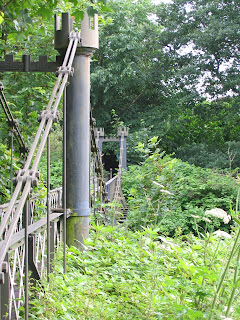 Another rather different bridge over the Aire, near Apperley Bridge.  This is a narrow pedestrian suspension bridge.  Same principle as Brunel's famous one at Clifton - just rather smaller! 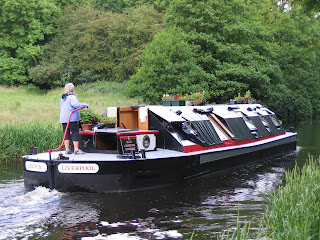 A fine modern replica of a type of working boat that used to ply the whole length of the Leeds and Liverpool Canal.  About the same length as our narrowboat, but about twice the width - an ideal fit in the locks on this canal. 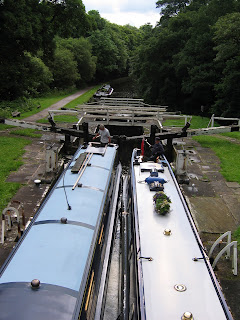 You can see the replica working boat waiting below Field Locks while two narrowboats work their way up.  We followed two days later, when a long-awaited consignment of tools had arrived from Switzerland ! 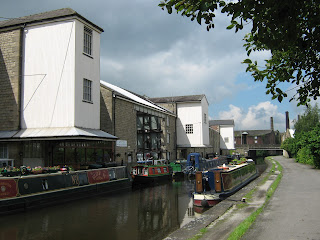 The canal seems to slip through a (fairly) 'green corridor' between  Leeds and Bradford for many miles, so we were still on the edges of the conurbation as we stopped briefly in Shipley . . . 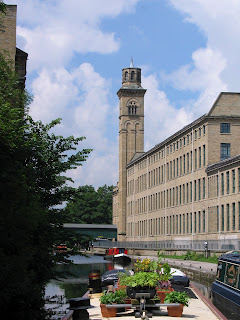 . . . and as we chugged past Titus Salt's imposing mill buildings in Saltaire. 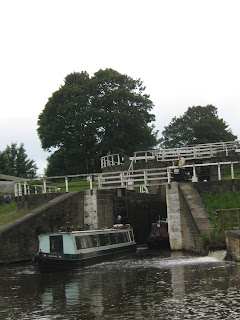 Just a couple of miles further on, and we came to the Bingley 3-Rise staircase locks, which led us on the their more famous neighbours . . . 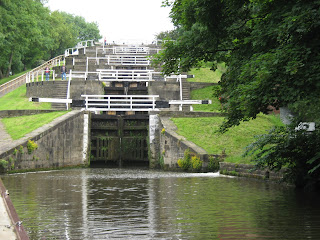 . . . the Bingley 5-Rise.  The 3-Rise locks lift the canal by nearly 30 feet, but the 5-Rise (also staircase locks) take it up 60 feet.  As the top gate of each lock is the bottom gate of the next one above, those are some massive gates.

Almost unbelievably, there are no more locks for more than 16 miles, just outside Gargrave.  The canal follows the high contour along the side of Airedale as the level of the valley floor rises.  The mighty River Aire which threatened to flood us in Leeds became smaller as we followed it back up towards its source, eventually crossing it for the last time soon after Gargrave. 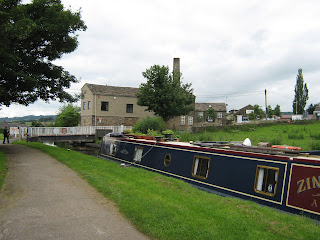 Meanwhile, we were stuck!  We had been warned that Micklethwaite swing bridge sometimes played up.  It did, and we needed to call out British Waterways / Canal & River Trust to come and fix it.  A longish wait, but they fixed it really quickly - Thanks, guys! 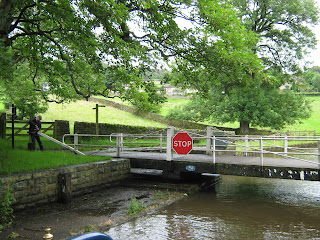 There may not be any locks between Bingley and Gargrave, but there are plenty of swing bridges- 21 in those 16 miles!  This one rejoices in the name of Milking Hill Swing Bridge - hand operated, like most of them. 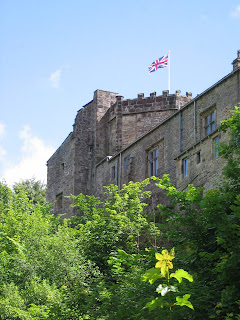 And so to Skipton!  We really like this town, with its market street, its castle and its friendly welcome.  Back in 2008, we stayed there longer and came back a couple of times, but Val's knees had restricted our exploration on foot. 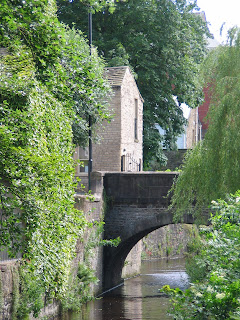 This time, we could both walk up the 'Springs Branch' of the canal which follows the Eller Brook round the back of the town and below the castle, 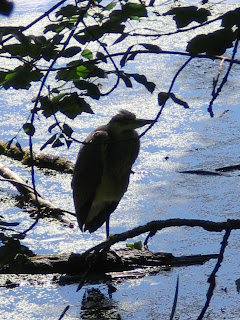 and then leads on into Skipton Woods, where we saw this heron beside the lake. 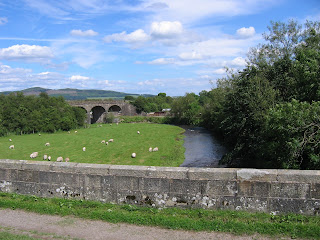 On to Gargrave and beyond, where we crossed Priest Holme Aqueduct over the young River Aire, seeing it flowing away south and east, back the way we had come. 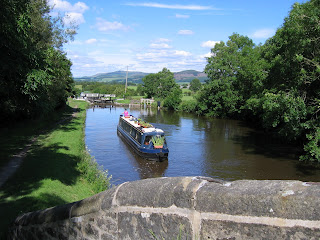 Still climbing, up the Bank Newton Locks (6 locks, 56 ft rise), with the hills above Skipton now on the horizon. 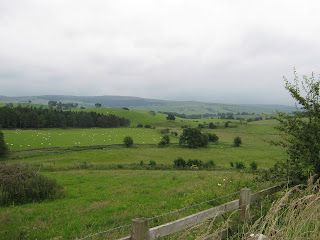 Above Bank Newton, to one of our favourite spots on this section of canal.  It feels like it should be the 'summit pound', as the canal twists and turns around the contours in open moor farmland, but there are still more locks to come.

Here are some of the wild flowers we found here :- 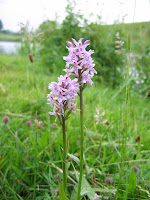 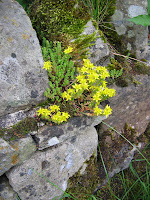 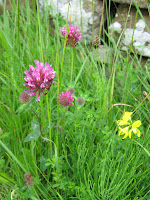 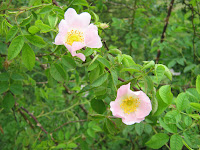 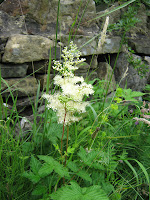 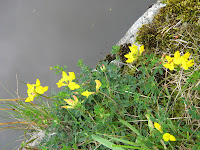 We remember the orchids from 2008! 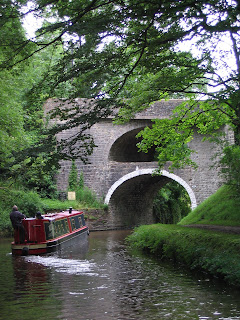 Under the double arch road bridge at the isolated village of East Marton.  Apparently the second 'layer' was built to raise the road, removing the dip so that traffic could flow more freely. 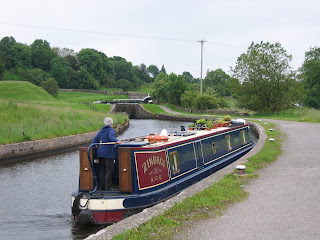 After the canal had wound its way through yet more wild and open country, we came to Greenberfield, the last three locks UP on this side of the Pennines, just on the edge of Barnoldswick ('Barlick' to the locals). 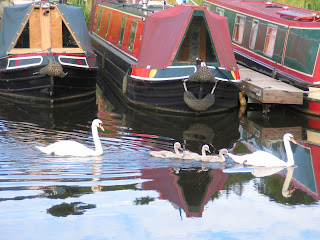 Surprisingly young cygnets for mid-July!  We reckon the bizarre weather this year has significantly affected the breeding of many wild birds, some apparently starting again because earlier broods did not survive. 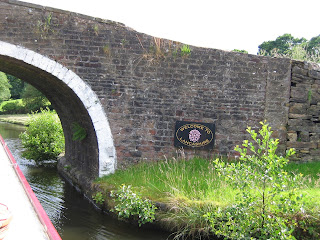 You'll probably need to click on the picture to read the welcome on this bridge, though the colour of the rose has faded a little!  We were definitely on the top level now, with just one 'barrier' between us and the long descent on the western side . . . 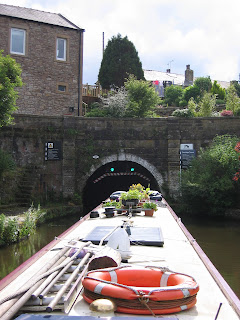 Foulridge Tunnel.  There is a well-documented story of Buttercup the cow, who fell in the canal at the western end in 1912 and swam through to Foulridge, where she was revived with alcohol!  The timed traffic lights let us through on the hour, and we were through in about 15 minutes.