The 'Curly Wyrley' Way Round Birmingham 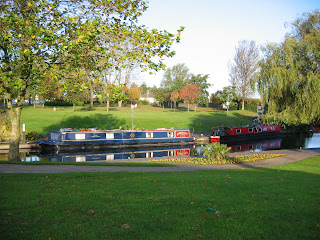 Coming up the 21 Wolverhampton locks was not too bad at all! Last time we came this way was in April last year, when we came up the 21, stopped for lunch and then carried on right into Birmingham until eight at night! Needless to say, we took it a bit more leisurely this time, and simply stopped overnight in the pleasant little basin at the top of the locks. It looks idyllic and was really very quiet and secure, but is actually within easy walking distance of the city centre.
Besides, we had other ideas . . . we were not going to just plunge straight through on one of the 'main lines' from Wolverhampton to Birmingham. We had done that on our last two visits this way. This was time for a little more exploration.
The maps of the BCN (Birmingham Canal Navigations) 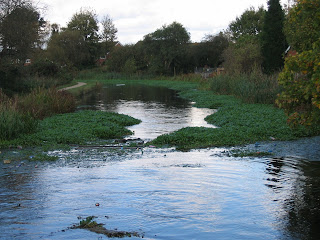 show miles of little-used waterways in all directions around the city, and one that had taken our interest was the 'Wyrley and Essington' going around the north-east. Affectionately known as the 'Curly Wyrley', this has a reputation for being shallow and weedy but certainly not impassable, so we thought we would try it out!
So we turned off the main line at Horseley Fields Junction and set off northeasterly along the W & E. First stop was to find a Sainsburys to stock up on supplies. Fortunately our trusty 'First Mate Guides' cover even the deeper recesses of the BCN, so we knew there was one coming soon! We moored carefully out of the way of a bridge, so as not to block any other boats. No worries there, but we did find the 'weedy' reputation fulfilled very soon – 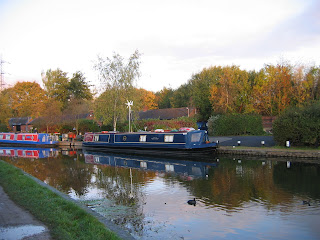 here is a lump of floating pennywort AFTER we had got through it, and there were more. One disused side arm looked like a very lush field, no water visible! But the most it needed was Dave up the front with a boathook, pushing the thicker bits aside while Val revved the engine a little – being sure to slip into neutral when the propeller was near the weed, to avoid getting tangles! We plodded on . . .
We didn't see any other moving boats and hardly any boats at all until we arrived at Sneyd Junction, where we were made very welcome by Ralph who lives on board his boat there and acts as the warden of the mooring site. Like so much of this canal, here was a quiet little backwater, between the M6 motorway and Bloxwich suburbs, probably unknown to many people who live in the immediate area. While we were up in this forgotten corner, there were two diversions to explore as well. The first was a dead straight canal known as the Cannock Extension which once connected with the Staffordshire and Worcestershire Canal. We went up it, turned around, had lunch and came back down. Not exciting, perhaps, but interesting. Like this, the Anglesey branch once linked to working coalfields but now comes to a very scenic end at the foot of the Chasewater reservoir. Only the (fairly muffled) hum of the M6 Toll reminds you that you are not miles from anywhere! If you look carefully, you may just see Zindagi in front of the houses. 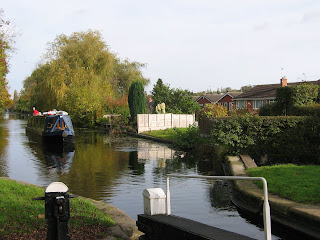 By the way, did you know that you can 'explore' our route (and any other part of the waterways system) by going to the map via the 'Where Zindagi is now' link and then just moving around on that. Don't be content with seeing where we are; you can look around the whole network!
From the northeasterly corner of the BCN, it was time to start heading south, so we left the Anglesey Branch and took the Daw End Branch to Longwood Junction. We were going to go on, but decided to stay there overnight as the rain was lashing down! So the next day (having passed through no locks since Wolverhampton) we started down the 9 locks of the Rushall Canal, cruised through leafy 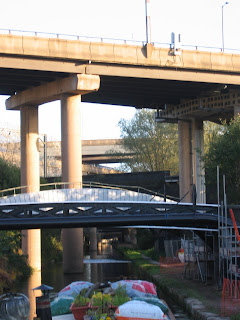 Walsall suburbs, joined the Tame Valley Canal, had lunch on a high embankment near Perry Barr, then down the 13 Perry Barr locks to Salford Junction, where two canals join from central Birmingham.
The whole junction is totally dwarfed by the whirling concrete lanes of 'Spaghetti Junction' above. Very few motorists will be aware of the canals below and, to the canal boater, the hectic rush of vehicles seems like a different world. The canal seems to slip quietly unnoticed below and gradually leaves the noise behind. By the time we reached Minworth, Birmingham was receding into the distance, though we still had a busy road beside us.
Posted by Dave and Val Taylor at 10:10 pm

We did the first part of the W&E in September, then turned down the Walsall Canal to Walsall basin, before returning to Birmingham via the Ryders Green Locks. Like you, we saw almost no other moving boats. We loved it, and want to go back to do all the more northerly parts that you've just done. If more people went, it wouldn't be so weedy and difficult!

We agree! And of course we want to see the bit YOU did, and all the other linking bits. As we shall probably go through Birmingham a few more times, we shall probably try something different each time! Certainly much better than just plodding along either of the main lines! And if you do go north, don't be worried by warnings that Hollands Bridge near Bloxwich is low – it isn't! Maybe new editions of Nicholson don't have that warning, but ours did and we were getting ready to strip the roof bare but sailed through as normal!