Batteries – and the Somerset Levels! 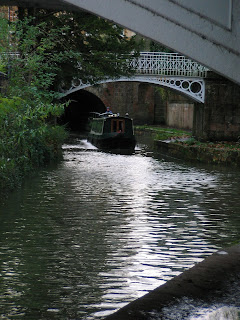 Our battery problem on board Zindagi was getting worse, but all three solutions began to slot into place. (Thank you, Father!) We had invited Jonny and Sue to come and visit us on the boat while we were somewhere near them. They replied that they would love to see us but they were too busy with stuff at home, so would we like to come and see them? They would even drive up from near Glastonbury to collect us. Meanwhile, we had located a mobile auto electrical specialist who was happy to come and collect the batteries, charge them up and bring them back to us a day or two later, so all we had to do was arrange mooring at Bathampton for a week instead of two days. Good old British Waterways! When we phoned up to explain our problem, they very kindly gave us permission, so it was all arranged.

We got to Bathampton on the Sunday, giving Dave the opportunity to walk into Bath and see the canal as it slips decorously through the handsome cast iron bridges of Sydney Gardens. It must have been quite a clash of cultures when the working canal came through this genteel part of Bath back in the 1800s!
Lee the battery guy was coming to Bathampton at about lunchtime on Monday, so we ran the central heating and had the woodburner going before Dave disconnected the batteries and took them out, leaving the boat pretty much lifeless. Sue drove up at the same time and, although Lee was a little delayed, we were soon leaving Zindagi all locked up and heading down to the Somerset Levels! Here's a view of part of the River Brue with Glastonbury Tor in the background. 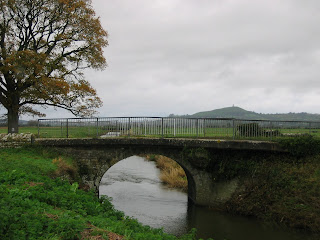 Jonny and Sue had warned us that they were very involved in some repairs, improvements and decoration in the bungalow that Jonny's parents were soon to move in to, so we went prepared to help, and were soon busy painting walls and ceilings. Don't get the idea that we were slaving away all the time – far from it! We enjoyed meeting some of their friends we hadn't met before, and were generously included in invitations out for two evenings and a lunchtime!

The few days were extended into a week, and Lee kindly re-arranged his return delivery of the batteries. His comments on the batteries were not encouraging, though. He had tested them after charging them and found the same problem as we had, that they were losing charge fast. "I think you'll go on having trouble with them" he said. Really nice and helpful bloke, and we have no hesitation in recommending him if you need auto electrics in the Bristol and Bath area. Dave e-mailed the manufacturers again, reporting Lee's comments and telling them that we would keep them advised of progress.
Posted by Dave and Val Taylor at 3:33 pm