Eau What a Day!

APOLOGIES! OUR BLOG IS RUNNING BEHIND OUR TRAVELS. We were here in mid-June. We are trying to get up to date as soon as possible, but don't want you to miss out on any part of our travels! CLICK ON 'Where Zindagi Is Now' to find our latest location. 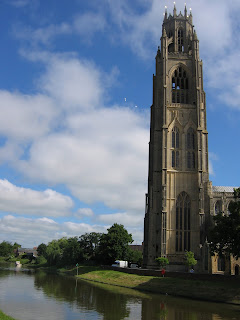 Leaving Boston, we headed back north-westwards, retracing our route to Torksey. We wondered about diverting at Anton's Gowt Lock and exploring the 'Witham Navigable Drains' but decided against it, taking into account the low bridges, weed, lack of formal turning places and the general philosophy of the Drains that they are there primarily for drainage and not for navigation!

But we thought we WOULD try the Kyme Eau, aka Sleaford Navigation, which used to link Sleaford to the Witham. There are plans to restore the full 13 mile length, but the present limit of navigation lies about 3 miles west of South Kyme at Cobblers Lock, with a 'winding hole' to turn boats up to 70ft long. 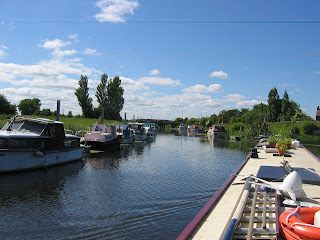 As we turned off the Witham, past a line of moored boats, we asked a boater what it was like further on. "A bit weedy" the sage replied, and went on fishing. We knew it was reputed to have quite a bit of weed, so this was no surprise and we carried on. 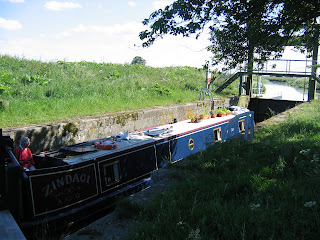 Sure enough, our progress was slow, with the occasional thrust in reverse to clear weed off the propeller, but we made headway to the Bottom Lock, about 1½ miles from the junction, and found that the water was clearer above that. Progress was still limited by shallowness and some weed, but we were able to move a little quicker.
Gradually, however, the weed became thicker and thicker, worse than it had been below the lock, and we entered South Kyme hoping to find that the navigation improved through the village. 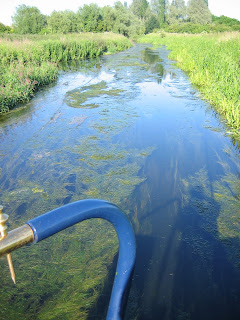 It didn't! In fact it became a lot worse, as if the locals didn't really want any boats there. There was nowhere to moor to visit the village, and the navigation itself was horrendously overgrown, with thick willow branches making it near impossible for us to get 'Zindagi' through. Maximum dimensions quoted for this navigation are 72' x 14'6", but we doubt whether anything that size has been through for a very long time! ('Zindagi' measures 57' x 6'10")
Having penetrated the 'jungle' of South Kyme, the weed problem was even worse, and we were making negligible progress. The obvious answer was (and had been for a while!) to turn round and go back, but our problem was that the only turning space was still 3 miles ahead. The only other winding hole lay about 3 miles behind us, at the lock! 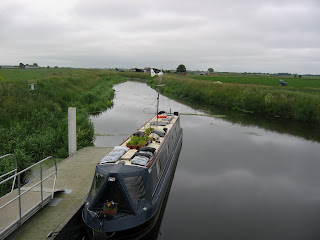 So, for the next three hours, we discovered that the average speed of a narrowboat in reverse through weedy water is about 1 mph! Steering a narrowboat in reverse is notoriously unpredictable, but it wasn't too bad. We were glad to get to the lock, turn the boat around and moor up to the lock moorings. Not what you are supposed to do, but it was nearly 10pm, no other boats were likely to arrive, and there was nowhere else to moor anyway!
The next morning, down the lock to make our escape, but we even had a short hold up there! 'Zindagi' grounded slightly in the lock, so we had to partly refill it and move the boat forwards a little before re-emptying it and getting away.
On our way out to the Witham, we passed the sage, still fishing on his boat.  "How did you get on?" he asked.  We told him, including about reversing for 3 miles.  "Thought you might have to do that", he said . . .
Posted by Dave and Val Taylor at 3:34 pm