APOLOGIES! OUR BLOG IS RUNNING BEHIND OUR TRAVELS. We were here in mid-June. We are trying to get up to date as soon as possible, but don't want you to miss out on any part of our travels! CLICK ON 'Where Zindagi Is Now' to find our latest location. 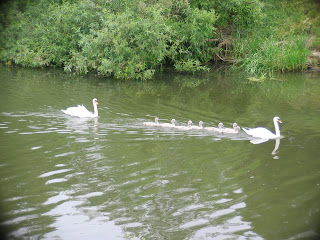 Torksey Lock was our gateway to another new world – the Lincolnshire fens.
The Fossdyke from Torksey to Lincoln was built in about AD 120 by the Romans, to join the Trent to the Witham, which they had also made navigable from Lincoln to Boston and the Wash. Apparently the Danes later used both of them to invade England, and the Fossdyke remains the oldest man-made navigation in the country which is still in use. Our route to Boston stretched 40-odd miles south-east, with only 2 locks on the way! 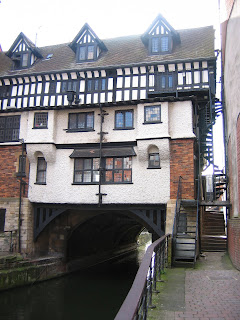 Just 11 miles (and no locks!) from Torksey, Lincoln was an easy target for our first day. After the vast expanse of the Brayford Pool, the Witham Navigation ducks out under the famous 'Glory Hole' arch, which dates from about 1160. The houses now on the bridge were built in the mid 1500s . . . 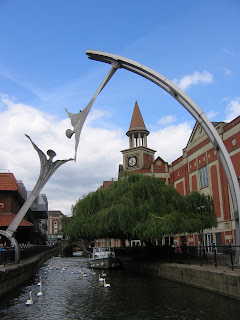 . . . and then into the 'Waterside' development, with its modern sculptures poised over the river. 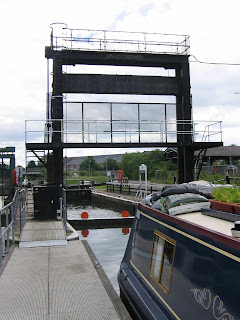 Stamp End Lock, on the edge of the industrial area, was our gateway out of the city and then the Witham quietly made its way into the fenland countryside, not dissimilar to the landscape we saw last year on the Cambridgeshire fens – and only one more lock in the next 31 miles to Boston! 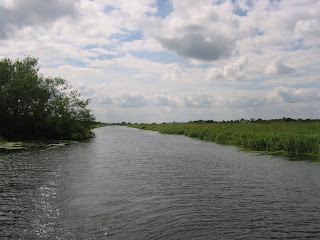 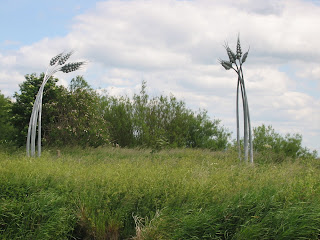 Long straight reaches of the river, with hardly any detectable flow but at least the banks were not too high to see the surrounding countryside – and unexpected sculpture in the 'middle of nowhere'! There was very little 'traffic', but we saw the occasional other boat. 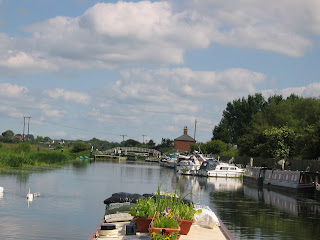 At Bardney Lock there were a few boats moored and one or two people around, and the lock was even filled for us and the gates open! Folk we had met at Stamp End Lock had seen us coming and prepared it for us – this sort of thing happens on the waterways quite often; a relaxed and friendly approach. 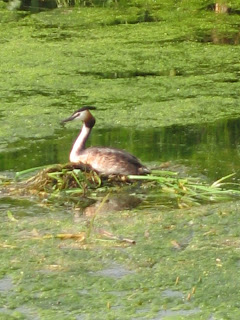 Just past Bardney, we spotted a Great Crested Grebe on its nest, and managed to get close enough to get a picture, for a change! 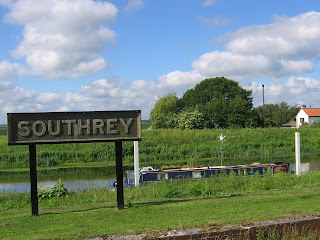 And then on to a tiny little village which once boasted three pubs, a railway station, a ferry and a butterscotch factory. The factory, ferry, railway line and one of the pubs have gone and one pub is inaccessible on the opposite bank, but the station platform and sign remind you that Southrey was once busier, and maybe bigger, than it is now. 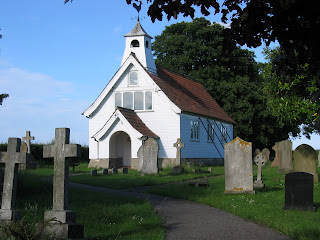 If it was much bigger, they would have had difficulty getting everyone into the little wooden chapel on special occasions. Built by the villagers in 1898, it seems very well maintained – but tiny! 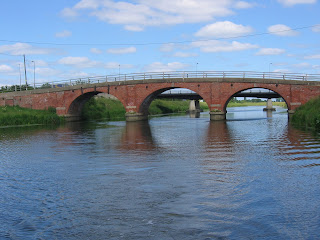 As we came near the old and new bridges at Tattershall Bridge, we were directly below the flightpath from Coningsby airfield, so our fenland tranquility was shattered by screaming jets. We passed the entrance to the Kyme Eau (Sleaford Navigation) and wondered about visiting it on our way back. 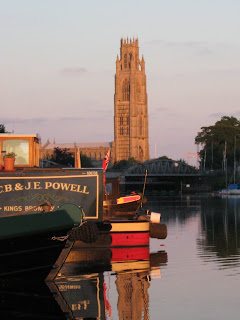 And so on to Boston! The tower of 'Boston Stump' dominates the skyline, and you can just see the bridge over the Grand Sluice, leading to the tidal River Haven and the Wash. Access to the 'South 40ft Drain' has recently been re-established, and the 'Fens Waterway Link' is planned to connect from here right round into the Nene near Peterborough, giving a through route for wider boats between the Trent and the Cambridgeshire Fens, without crossing the Wash as they now need to do! Will the Link be completed in time for us to use it? Who knows?
Posted by Dave and Val Taylor at 7:01 pm