The Tidal Trent to Torksey 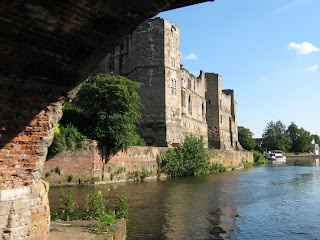 Before we leave Newark and take you downstream, a couple more photos. The first is one taken as we slipped under the bridge the afternoon before, framing the one surviving wall of the castle, which dates from 1173, with various additions up to the 16th Century. 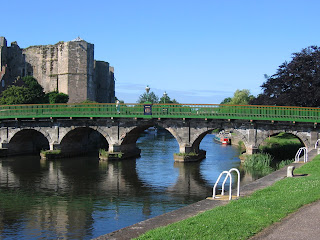 And then one to show you the 1775 Trent bridge more fully. Great architecture, still in heavy use, modified over the years and yet remaining a thing of beauty. 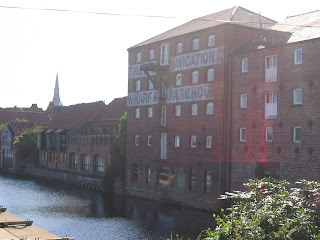 And space, perhaps, to slip in a taste of more recent history, but which has apparently been more forgotten – the time when Newark was a bustling inland port and the Trent Navigation Company needed its large warehouse for the 'barge trains' which carried up to 600 tons of freight and could reach Newark from Hull in 12 hours. Those days are long gone, and only faded lettering on a fine old building remains.
But it was time to move on! Just 5 miles downstream was Cromwell Lock, our entry onto the tidal section of the Trent which leads down to join the Yorkshire Ouse at Trent Falls and on into the Humber. We have done little bits of tidal water before, but this was to be our longest section of tidal river so far. Fortunately, we were taking it in smaller 'bites', and we certainly weren't going as far as Trent Falls! 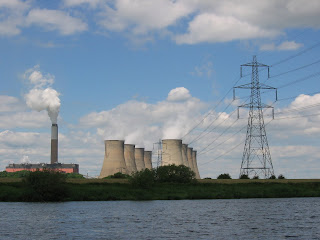 This first section was to take us to Torksey, where the Fossdyke Navigation joins the Trent, 15 miles downstream from Cromwell Lock. We had got used to being 'looked after' by the Trent lock-keepers, and on the tideway this is even more important, as there is big shipping around and Torksey Lock, for example, is only accessible from the Trent at certain stages of the tide.
River cruising is not like canal cruising anyway, as you can't just stop and moor up wherever you like, but have to find designated 'visitor moorings', and sometimes you are hemmed in by high flood banks and can't see much – though we quite like power stations!  Tidal river cruising is the same but more so – you can't really stop at all in between the locks, except at rare refuges. So it's very different, sometimes interesting, sometime a bit boring, but you can't allow your concentration to slip – there might be a sandbank to avoid or a big barge coming round the next corner – and the Trent has plenty of corners! 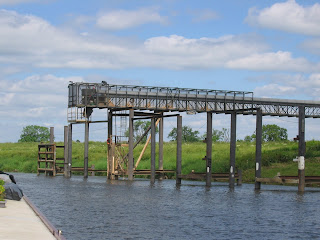 All down the Trent from here on, we found gantries looming over the banks, loading wharves for the enormous sand and gravel barges, but we were told that not many of them are operating as the recession has hit demand for sand and gravel. 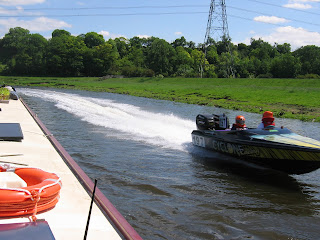 The lock-keeper at Cromwell had told us that there were going to be some water-skiers further downstream, but "you won't need to do anything about them, they'll keep out of your way." Near High Marnham power station (which seems disused), we were suddenly in the midst of power boats, with or without skiers, travelling at high speed, creating strong wash and sometimes passing us much too close and/or on the wrong side, seemingly with no appreciation of the effect they were having on a slow-moving, flat-bottomed narrowboat. Fortunately, we left them behind after a few miles. 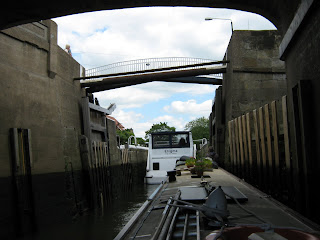 Soon after 2 pm, we arrived at Torksey, turned off into the lock approach, moored up and went to look for the lock-keeper to tell him we had arrived. He had seen us on his CCTV, and so we were soon sharing the lock with a large cruiser and rising to the level of the Fossdyke. We filled up with water and trundled along to the visitor moorings.
Our first encounter with the tidal Trent had gone well. Now for the Fossdyke and Witham!
Posted by Dave and Val Taylor at 10:34 am

Dont worry about the powerboats on the Trent they get out of your way. It may seem that they have no appreciation of the effect on your boat but you have to trust them. They do know what they are doing and they really wont want to hit you at the speeds they are travelling at!!

If you are still on the Fossdyke/Witham at the weekend we may see you around.

We weren't worried about being HIT – that would do them more damage than us, I guess. More that they had no respect for other river users, especially with passing far too close for us to turn to face into their wash. Also passing on the wrong side was foolish, as we were towards the right

Sorry, we are not on the Fossdyke & Witham now – up in Yorkshire! Our blog is rather behind our travels, but we are gradually catching up . . .

It isnt that they have no respect for other river users. You cant just come down of the plane as soon as you see another boat. It doesnt work like that you end up making more wash for everybody concerned and it makes the situation more dangerous. The zones in which skiing and watersports are permitted are very clearly sign posted so other users should be aware of their prescence.

Whilst these boats are highly manouverable, if they didnt see you until the last moment they will have had little chance to move over to pass on the correct side. Sometimes it is easier and safer if they pass the wrong side of other vessels in the area.

There have been very few instances of other river users having problems with the ski clubs. On the whole those that use the river on a regular basis expect them to be there and know what they will do and when. They have as much right to use the river as everybody else and have paid extra fees to have the speed restrictions lifted in their area. They dont set out to inconvenience other river users, they are there to enjoy themself much the same as you were.

I certainly don't want to get into an argument about this, but there was no time when the speedboats couldn't see us until the last moment. We kept over to the right but tried to steer into the worst of their wash. I understand about not being safe to suddenly come down off the plane. The 'zone' was not signposted at all, as far as we could see. Obviously our first time on the tidal Trent; our only information re speedboats was the advice from the Cromwell lock-keeper.