Nottingham to Newark - Afloat and Aground! 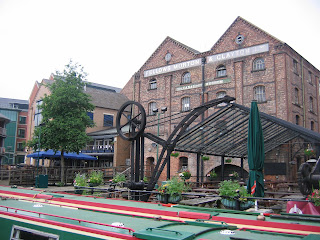 We had been 'heading for the Trent' since we left Blisworth back in mid-May, but it was the afternoon of 9th of June as we turned left out of Trent Lock on the Erewash and at last, we were actually ON the Trent and heading downstream to Nottingham.
Truth be told, it was only a couple of hundred yards before we turned off along the Cranfleet Cut which bypasses the enormous Thrumpton Weir, but once through Cranfleet lock we were on the river again, snaking our way eastwards and slightly northwards.
Only just over four miles, though, and we were back on canal as the Beeston Canal and part of the old Nottingham Canal take the navigation through Nottingham and past remnants of its canal history. Then, 4½ miles and 3 locks later, we 'locked out' onto the Trent next to Trent Bridge and County Hall. 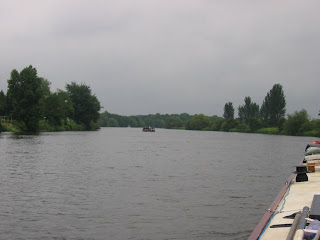 Back to river navigation again, dealing with currents and vast expanses of water (when compared with the Midlands narrow canals, anyway). Last time we did this was going UP the Thames from Reading to Oxford in the depths of winter. Now it was DOWNstream in glorious summer. It seems a bit counter-intuitive, but travelling downstream is a bit trickier than up, as the river carries you along and stopping is more difficult. 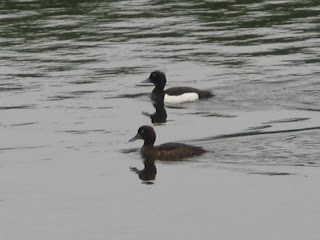 One thing we noticed quite quickly on the Trent was the change in bird life. Tufted ducks were suddenly frequent, and even the occasional Shelduck. A few more Great Crested Grebe, too. As they hunt underwater, the clearer river waters are ideal for them – no wonder we never see them on canals! Even our old friends, sand martins, flying in and out of their burrows in the sandy banks. We last remembered seeing them nesting in the banks of the Aire and the Yorkshire Ouse in 2008. 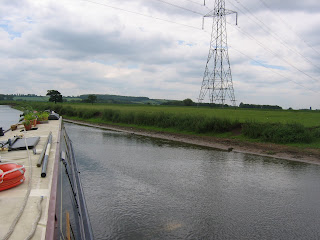 This next picture may puzzle you a little. Why, you may ask, are Dave and Val showing us a dull picture of the boat, a boring river bank and a pylon? Take a closer look and you will see that the boat is at an 'interesting' angle, and you may even detect a pale patch in the water next to it. A few miles from Nottingham, near the village of Burton Joyce, we had run aground! We weren't too close to the bank, though we had been watching sand martins. No, we had grounded on an upturned fibreglass dinghy, the 'pale patch' being its white hull below the water.
No amount of reversing and 'poling off' seemed to have any effect. We were stuck! As the Trent lock-keepers look after boaters by phoning each other to say which boats are on their way, we phoned Gunthorpe Lock to tell them our predicament, and ask whether they knew of any way we could get help. They couldn't help directly, but promised to ask the next narrowboat(s) that came through to try to give us a tow. We eventually turned off the engine and waited – but went on trying to think of how to escape! 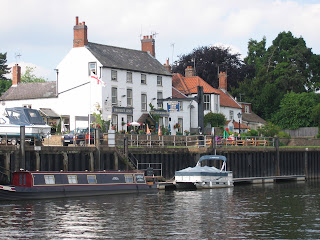 With the river flowing from behind us, was there a way of using that force to help us get off the dinghy? We re-started the engine and tried to power the stern out as far as possible from the bank, with Dave trying to 'pole off' as much as he could. Result? The river current caught us a bit more, the boat tipped to an even crazier angle and the fridge emptied itself on the floor – but WE WERE FREE! Then a quick phone call to the lock-keeper to tell him we were on our way – 1¼ hours after running aground! Oh, the joys of boating! 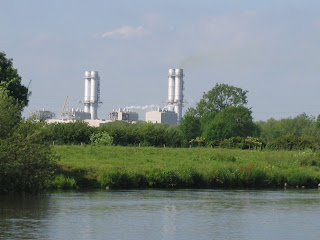 The rest of the journey down to Newark was uneventful. We passed the little village of Fiskerton, with its pub and convenient mooring, and then Staythorpe Power Station, reminding us that we were in 'power station alley' along the Trent Valley.
Then into Newark itself, past the mouth of the River Devon (pronounced 'Deevon') and into Newark Town Lock, not long before the lock-keeper went off duty, with the magnificent ruin of Newark Castle ahead of us. 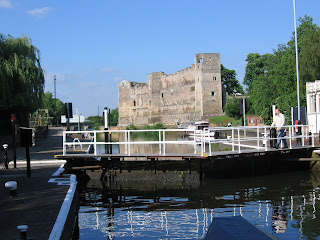 Past the castle, through the lovely old 7-arched bridge, and we soon found a safe mooring within easy walking distance of the town.
Posted by Dave and Val Taylor at 12:00 pm