APOLOGIES! OUR BLOG IS RUNNING BEHIND OUR TRAVELS. We were here in late June. We are trying to get up to date as soon as possible, but don't want you to miss out on any part of our travels! CLICK ON 'Where Zindagi Is Now' to find our latest location. 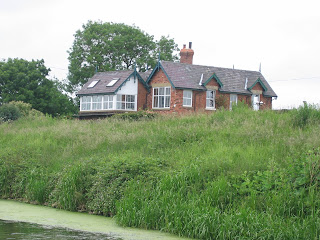 After our escape from the weedy Kyme Eau, we stopped at the first opportunity to de-weed the propeller and then made an uneventful return journey to Torksey, though we did pass an interesting house near Southrey, another remnant from the days when the railway ran all along the banks of the navigation. The former signal box seems to make a lovely first-floor conservatory with a view over the river. 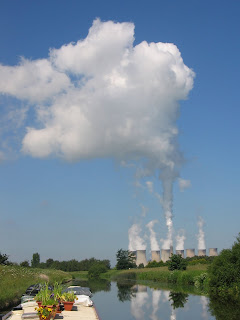 Time for our next 'leg' on the tidal Trent from Torksey to West Stockwith, some 14¾ miles downstream. We phoned the Torksey lock-keeper, who suggested that 12 noon would be a good time to go down the lock, so we dawdled along from our overnight mooring at Saxilby 5½ miles way, filled up with water and waited. As we approached Torksey, Cottam Power Station, a mile or two away on the west of the Trent, announced its presence with its own personal home-made cloud! 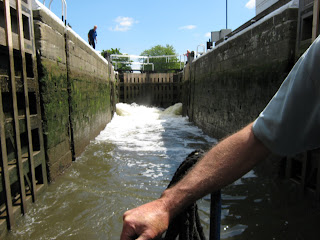 Soon after 12, we were in the lock and ready to go down, but the lock-keeper seemed a bit concerned. The tide might be a bit low now, so we might have some difficulty getting over the bottom sill, but "let's try anyway, me duck". We did try; it was a bit low and we couldn't get out, so he went to Plan B: He would partly refill the lock, then open the bottom gates as quickly as he could and also open the top sluices, so as to send us out on a wave to lift us over the sill. It worked, and we were 'flushed out', but not without rather a bump as we crossed the sill – and then we were back on the Trent! 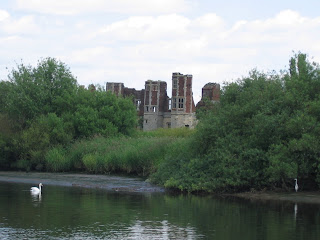 Heading downstream, we could snatch a glimpse of the ruined Torksey Castle, unusually built of brick above the lower levels of stone, and standing here abandoned since the 1500s . . . 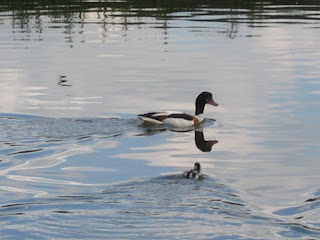 . . . and then a Shelduck with its solitary duckling, before the Trent resumed its snaking course.
We had been warned, both by books and people, to always keep an eye open for large boats using the river. They are much bigger, they are moving faster, they need the deeper water and cannot manoeuvre very well, so the advice is to navigate your narrowboat in the expectation of meeting one of these giants round the next corner. So, with plenty of corners, we stayed alert! 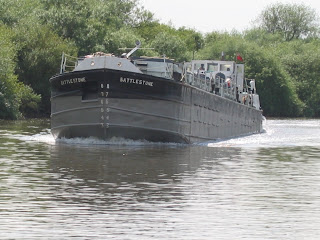 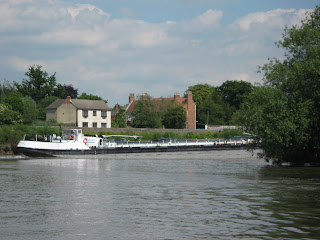 Fortunately, we met the 'Battlestone' on a straight section as it was coming upstream on the tide and the captain kindly slowed down past us before swinging into the next bend – nice timing!
Yes, by now the tide was flowing quite noticeably, so we had to 'punch' it from Gainsborough to West Stockwith. No problem, just more engine revs for not much forward movement! 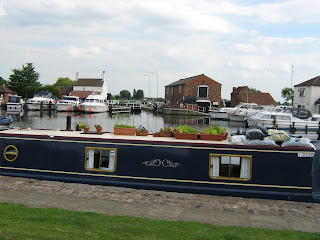 And so into West Stockwith Lock and up into the Basin, where Sue the lock-keeper welcomed us and showed us where we could moor overnight.
Posted by Dave and Val Taylor at 8:00 am

That looks like a nice mooring - in fact it appears to have the same view as we have tonight.
Oh, it is the same mooring :-)

I expect we'll have a similar piture on our blog tomorrow.