Heading For The Trent 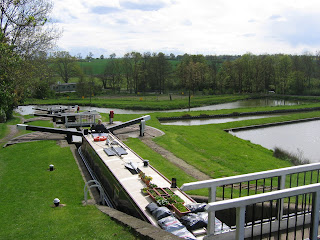 We chugged out of Blisworth Marina on 15th May, having spent rather longer there than we had expected this time. As you know, our plans for this year are to explore the waterways around the River Trent, before heading over the Pennines via the Rochdale Canal. So we needed to head north!
Familiar waters to start with, as we have travelled this way many times, the last time when we came back to Blisworth in March. The weather was rather better as we turned off at Norton Junction and headed for the 'Watford Flight' on the Leicester Arm of the Grand Union Canal. This lovely flight, mainly staircase locks where the top gates of one lock are the bottom gates of the next one up, climbs steeply up the hill just next to Watford Gap services on the M1, but is almost invisible from the motorway. Once at the top, the motorway continues northwest and the canal northeast, so the roar of traffic 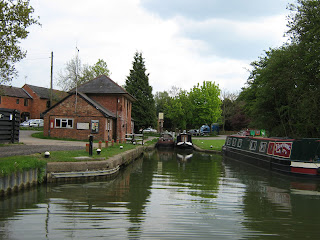 soon eased and we were enjoying one of our favourite stretches, more than 20 miles of narrow canal, mainly following the contours but also diving through two short tunnels on the way towards Foxton and Leicestershire.
We were in no rush; we had agreed to meet Leigh and Martin near Foxton on the 22nd, so we had time to go up the 1½ mile arm to the village of Welford, just for the fun of it, stop the night there and continue our journey the next day. Just one little lock on this arm.
Next day, we reached the top of Foxton Locks in time to fill up our water tank and have lunch before tackling the locks themselves. Lots more spectators here than at Watford, and more locks, too – this time in two 'staircases' of 5 locks each. Always satisfying to work through this flight smoothly!
We were still early to meet Martin 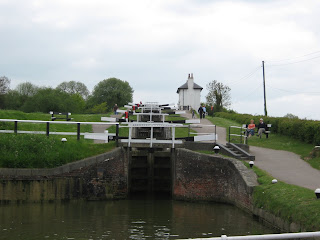 & Leigh, so we turned east to take the twisting route to Market Harborough, where we walked into the town centre for some shopping. A very pleasant market town, and well worth the walk! Last time we were here, Val's knees were too bad for that – no problem now!
Then back along the Market Harborough Arm, passing the bottom of Foxton Locks and on to Debdale Wharf. The folks here had very kindly agreed to accept delivery of Dave's latest consigment of garden tools from Switzerland, as well as letting Leigh and Martin park their car there while they came with us for a few days. We picked up the Swiss order and chugged on to a spot we remembered, about half an hour along the canal. L. & M. were coming the next day, so we had a little tidy-up – after Dave had put all the tools away! 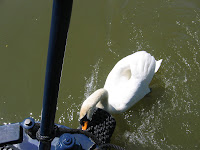 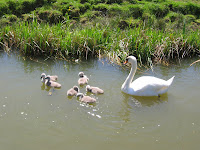 On the way, we passed a little family of swans and noticed that the male swan was very protective. On our way back to meet L. & M. the next morning, he made sure to see us off his territory by attacking the boat's rear fender, and we saw him do the same for at least one other boat! 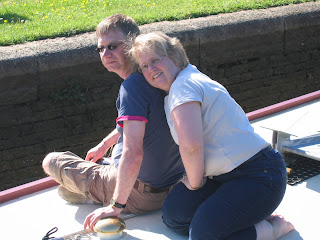 Once Leigh and Martin had arrived, we 'set sail' northwards towards Leicester, and Leigh soon decided that her favourite place in the boat was on the roof, enjoying the brilliant weather that we had in late May – and Martin joined her as well!
They didn't have very long to spend on board with us, but we introduced them to canal boating and a pretty part of Leicestershire as we travelled to Kilby Bridge and then back again. Locks, a short tunnel and peaceful moorings in the middle of nowhere – great!
Of course, as we retraced our route to Debdale Wharf to reunite L. & M. with their car and then set out back north again, we were able to enjoy 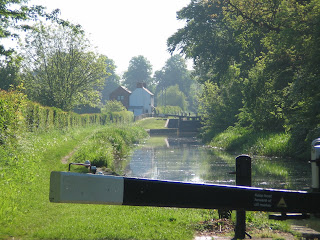 the countryside twice in each direction! Here are the locks at Newton Harcourt on a quiet May morning, before any boats were on the move.
We have been this way by boat twice before, but have always turned around and headed back south. This time, we were going on northwards, exploring waterways we have not seen before. Meanwhile, there were some familiar sights . . .

The crumbling mills and other industrial buildings started appearing alongside the canal as it crept into the Leicester suburbs and gradually transformed itself into the River Soar Navigation. We both remembered these but, when we had moored up at Castle Gardens, we walked into the City Centre and it was Val's m 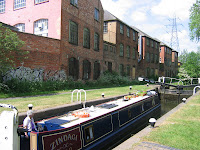 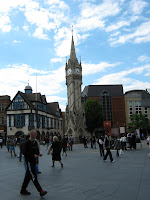 triggered by the old Clock Tower. She was born in Leicester and lived nearby in her early years. Almost everything else had changed, but the Clock Tower stands there, seemingly unmoved by the bustle and modernity surrounding it.


As we moved on northwards, the river (as it now was) took us through towns and villages which sometimes seemed to belong to an earlier time. Their close link with the waterside gave them an unchanging character, simple and almost private – quite a change from Leicester! 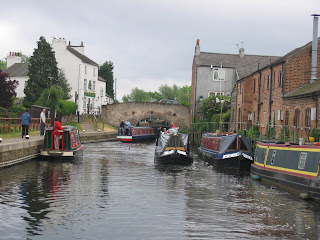 Mountsorrel proved to be quite a little waterways centre, with lots of activity around its lock and bridge. 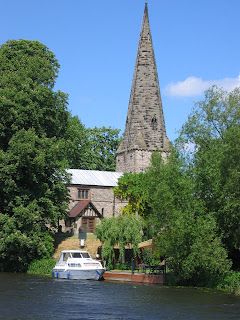 Normanton-on-Soar is right next to the river, but there seemed to be only one place where visiting boats could drop people off (not moor!) – just a tiny landing stage next to the parish church! 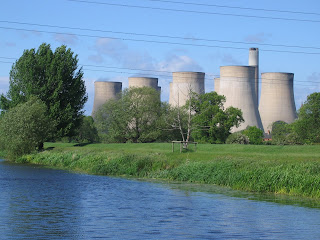 Back in Blisworth, when we said that we were heading for the Trent, someone said, "Ah, power station alley!" Sure enough, as we came close to the junction of the Soar and Trent, the cooling towers of Ratcliffe-on-Soar power station were there – Welcome to the Trent valley!
And then we came to the 5-way 'crossroads' of the River Trent: The Soar to the south, the Erewash Canal to the north, the Trent & Mersey Canal to the west and, on the right, the vast Thrumpton Weir (to be avoided at all costs!) and the relatively narrow Cranfleet Cut, the beginning of the River Trent Navigation
Posted by Dave and Val Taylor at 11:19 pm