A Canal to Nowhere? 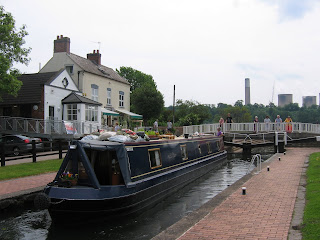 So there we were, back at the junction of the Rivers Soar and Trent and the Erewash Canal. Our plan was to go on down the Trent, but the Erewash was right there, only 11¾ miles long with 15 locks – it would be a shame not to sample it!
To be honest, there were some who had told us not to bother. "don't go there . . . the locks are hard to work . . . it's all weedy . . . it doesn't go anywhere . . . nothing to see, anyway . . ."
But you know us – We started up the Erewash!
Coming up Trent Lock, right next to the Navigation Inn, we had entered another little world. The Erewash Canal runs mostly through industrial towns with short stretches of countryside in between, and was once part of a busy local network which included the Derby and Nottingham Canals, now sadly both derelict, and joining onto the Cromford Canal, for which there seem to be some plans for part restoration. But this 'canal to nowhere' started to reveal its own particular charm. 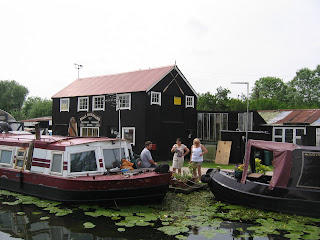 First, the name. Years ago, looking at canal maps and reading books, we had seen this little canal and smiled at its name; it looked as though it should be pronounced 'Ear-wash'! A little later, we found out that it was really called 'Erry-wash', and now we found the canal sharing a valley with the little River Erewash – hence the name.
The small boatyard between Trent Lock and Long Eaton reminded us of some on the Fens and the lower River Soar – from a quieter age and happy with it. And, I suppose, if you think of water lilies as weeds, then yes, it was weedy! We didn't have any problem with water weed at all. 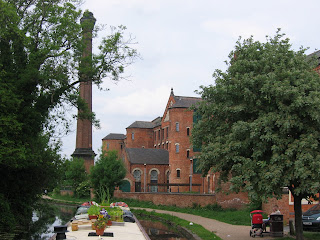 Coming through Long Eaton and then Sandiacre, we saw some fine old brick-built mills, none more impressive than the Springfield Mill in Sandiacre, now converted into apartments. 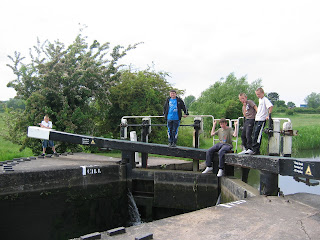 Not much further on, out in the countryside, we came to a lock just as another boat was coming out of it. "You've got some helpers here," we were told, "and they're pretty good." Sure enough, the youngsters who enjoy hanging around this lock were ready to help with opening and shutting gates, and were a friendly bunch too. Here's a picture, but what chance that they ever see it? 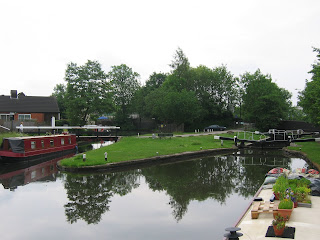 We chugged on to the basin at Langley Mill, the present limit of navigation, and found 'The Great Northern Inn' just nearby. We had been told that it was closed for refurbishment, but the refurb had been completed some time earlier. An excellent carvery lunch, with first-class vegetables, too – quite a rarity! 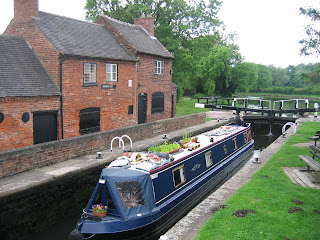 And so back down again, past Sandiacre Lock Cottage, the last remaining toll house on the Erewash Canal and the headquarters of the ECPDA (Erewash Canal Preservation and Development Association), who have done much to rescue this canal. 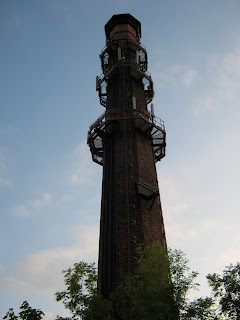 Then yet another mill chimney, this time without any mill buildings remaining, but pressed into more modern use!  . . .
. . . and out onto the Trent again . . .
Posted by Dave and Val Taylor at 10:59 am