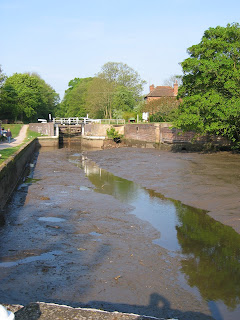 We went down the Hatton flight of locks on Saturday 28th, but not before we had to do a little troubleshooting! When Dave went for his morning walk, the canal below the top lock was empty! (Had someone deliberately vandalised the lock flight by draining out the water, or had there just been an accidental leak?) Either way, the canal had to be filled, so we just 'let down' some more water until there was enough to fill the canal.
Jeremy had planned to join us that morning, but he was a bit delayed, so we started out without him. As we did so, another boat moored behind us also pulled out to come down the locks with us. They had seen that we were on the move and decided to come down together – it really makes a lot of difference, as we found out!
Jo walked on down the hill to prepare the locks for us, Val was 'at the helm' of Zindagi, Dave did the lock work and Geoff was navigating 'Puffin 35' and hopping off to help with the locks. When Jeremy arrived, Geoff stayed on board and Jeremy and Dave worked the locks. With Jo's preparation and this team effort following her, we were down the whole flight of 21 locks in exactly 2½ hours! Maybe not a record, but very quick when you consider that we normally allow about 10-15 minutes per lock. We shall probably see Geoff and Jo again, as they are heading south towards the Thames like us.
Posted by Dave and Val Taylor at 9:59 pm

hey guys, lovely to speak to you both last night, sorry it was brief. when do you think you will get to london??? just checked your planned route on the map, and looks like it wil take you a while to get here... not early june like you thought?? i was thinking about joining you when you pass through, and maybe get dropped off when/if you come back this way... can i bring cesca??

Yes, early June seems a little unlikely now. We shall probably be on the Thames in a week or two, then on the Basingstoke Canal if there is still enough water in it, then down to London and the Regents Canal, so maybe later in June is more likely. Once we go through, there is no other way back, so dropping you off is no problem . . . and of course Chesca is very welcome!

woo hoo great! only thing is that i'll be in glasgow from 9th - 17th june, so might miss you, but we could always jump on on you way back and then just get a train back to london... let's see how it goes!
x