Getting Used to 'The River' 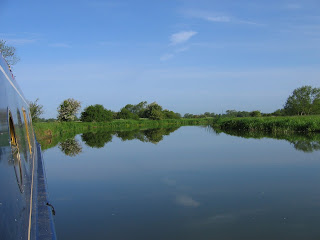 Being on the Thames is so different from the canals, as we said before. Apart from the lock-keepers doing all the work (most of the time!), there is the flow of the river, the different scenery and wildlife, the remoteness of some parts . . .
First of all, here is the 'morning after' photo from exactly the same place as the 'after sunset' picture last time – it gives some idea of the openness of this very different scenery. 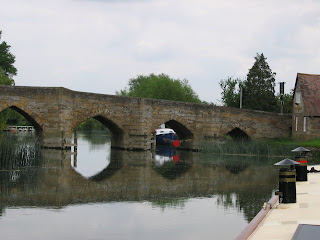 And then there are the bridges! Some really old ones on this part of the river, going upstream from Oxford to Lechlade. First is the 13th-Century one at the wonderfully-named Newbridge. If this one was new, how old was the old one? 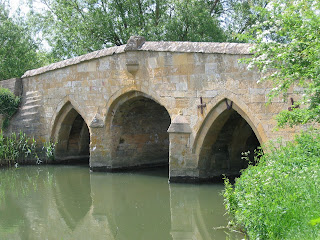 And then there is the very oldest (apparently) at Radcot (just near The Swan, where we had a very good Sunday lunch). Boats actually go through a later arch (1787), but the road still goes over the river on this one. 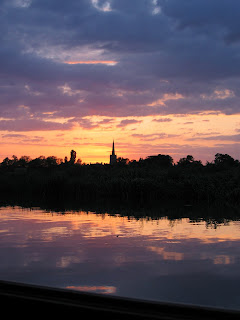 And then to Lechlade! Just half a mile on from here, we had to turn around at Inglesham and start back downstream. One day, hopefully, the Thames and Severn Canal will be functional again and boats will be able to travel on from Inglesham to the Gloucester and Sharpness Canal and the River Severn. 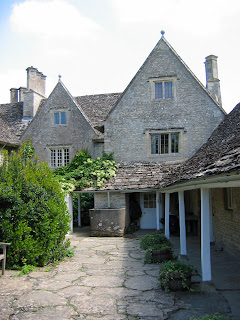 On our way back 'down', we dawdled deliberately so that we could visit Kelmscott Manor, one-time home of William Morris, as it opens on Wednesdays. From the Thames, you would hardly know Kelmscott is there. In Kelmscott, we heard someone say, "the Thames is quite near here, isn't it?" – they had no idea that it was only 200 yards away!

We took quite a few photos, but here is a slightly less 'usual' one of the little courtyard at the rear of the house.

Then chugging on downstream and back towards Oxford. It takes a little practice to get used to travelling with the flow of the river – more speed than travelling upstream, but less control. No wonder downstream 'traffic' has the right of way! 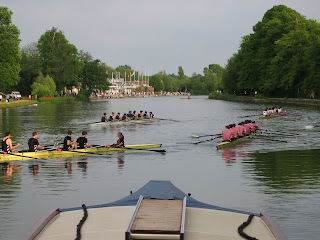 Passing the point where we joined the Thames last Friday, we entered more 'new territory' (for us) and very soon found ourselves having to wait for the last 2 races of this day of Oxford 'Eights Week'. A good chat with the student Race Marshal there while we waited, and an American visitor – both seemed interested in trying out canal boating some time. 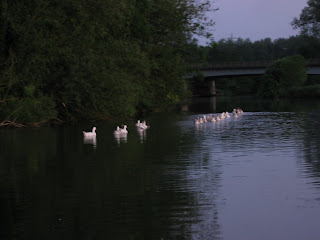 And, as a fitting end to this evening's blog, here is a little procession of geese swimming off into the Thames twilight . . .

Glad you're enjoying Oxford. From your map it appears that you're moored about 500m from our old home. Make sure you try the Isis pub for dinner! Hope to see you when you're nearer us in Surrey.

Beautiful pictures and glad to share the trip with you. Always wanted to sail the Thames. You are so right, the same picture at different times of day could be a different place. Different light and therefore different colour. I find this all the time with my photography. Even plants in the garden can change colour.
If you visit me at my blog you will see another river and locks. The Chelmer Navigation (Chelmesford to Malden) We visited last wednesday and I took lots of photos. Barbara

Thanks for your comment on our blog. Now we have found yours. Will add it to our list. When I find some spare time will put a link in our blog. We have caught up with our friends on No Problem.