Preparations – of many kinds! 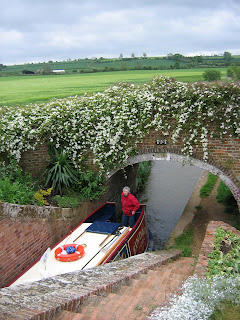 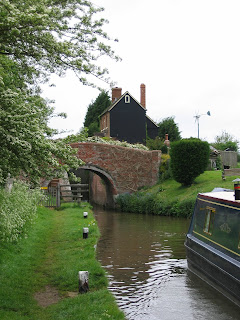 On our way down the Oxford Canal with Calvin and Miriam a few days ago, we saw the little cottage at Somerton Deep Lock. On the way back up, we took some better photos, and here they are. The 'window' in the roof is just painted on, though the sill is real!
We came north of Cropredy on Thursday, turned round south again and are moored on the edge of this pretty village. But why, you may ask, are we still on the Oxford Canal, and not down on the Thames by now? There are several answers:–
First, we need to get ready for cruising on the Thames. This means we must have an anchor and lifejackets. When we called in at
Aynho Wharf a few days ago and mentioned what we where looking for, Mike Walker said that he had an anchor in stock, just the right size for us, which he had bought in early for another boat. No problem, he could sell us that one and order another for the original customer. Mike didn't have any lifejackets, but Dave found a supplier on the internet and so we should soon be fully equipped for the River.
Since we started out in March, taking our tools sales business with us, there has been the question of how we are going to get deliveries of fresh stock from Switzerland. We have optimistically hoped that a friendly boatyard would be happy to accept a pallet load of stuff for us, but we didn't know for sure. Sales have been brisk recently, so some tools have sold out and we placed a fresh order a couple of weeks ago. Mike seemed just the sort of guy to ask – no problem, he said, so we expect the order to arrive there early next week. Thanks, Mike! We would love to 'plug' his business as a 'thank you', but can't find a website address for him.
Around about the same time, some more 'preparations' became public. Some weeks ago, Shireen told us that she is pregnant, but wanted to wait until she had her first scan before telling everyone. Well, now the scan is done and we have been given permission to tell the world that we are due to become grandparents in November! Shireen and Frankie are very happy and it has brough fresh focus to their house-hunting in London. It may also mean that we will try to be near them towards the end of the year – we shall need to find a good mooring!
Posted by Dave and Val Taylor at 12:05 pm