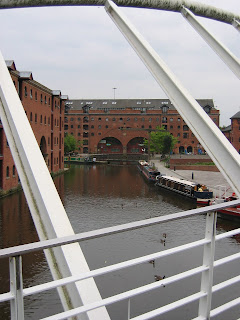 We could have just carried on down the next 9 locks on the Rochdale to Castlefield Basin, which we visited back in August 2008. Very pleasant there (here’s a picture), but then we would either have needed to take the long route to the Trent & Mersey via the Bridgewater Canal, or go back UP the 9 locks to the start of the Ashton Canal, where we already were. We decided to leave out the 9 locks – Dave had already walked that bit from Castlefield – and go on up the Ashton! 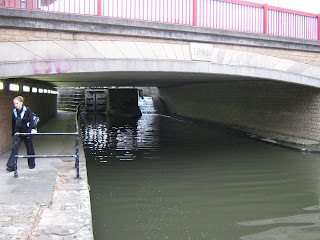 Just a few hundred yards up from our mooring, under a busy modern bridge, what could we see? A NARROW lock! You know we always feel that we have come back ‘home’ when we get back on narrow locks, but it had been a long time since we left them – Foxton, back in May! 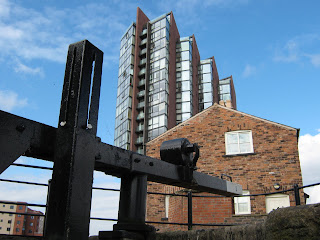 The Ashton fulfilled the promise of an old narrow canal keeping its old charm as it passes almost untouched through rapidly modernising Manchester suburbs, and the two cultures seemed to harmonise well. 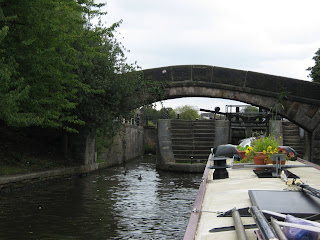 It rained quite a bit as we made our way up, passing under the ‘Camel’s Hump’ bridge just before Fairfield Junction, where we stopped for lunch and filled up our water tank.
Then on up to Ashton-Under-Lyne to stop for the night, with two unusual events: 1) We were going so quietly as we approached a line of anglers that the first one didn’t know we were there until we had snagged his line – which we couldn’t see because he wasn’t holding his rod! He was not happy, but there was nothing we could do. 2) Soon after we arrived at Dukinfield Junction (Ashton), a group of lads decided to throw eggs at us – for no apparent reason. We moved on a little to moor up – no further trouble!
﻿ 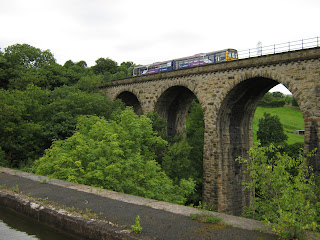 The next day, we just ‘ambled’ for 6½ miles along the Peak Forest Canal, mooring just below the Marple Flight of 16 locks, which would take us back up to 500 feet above sea level. The Marple Aqueduct crosses high above the River Goyt here, alongside the railway viaduct – even higher!
﻿ 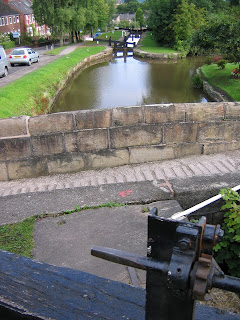 This is a lovely flight, rising up through a wooded hillside to gradually blend into the streets of the town, and the locks all have a characteristically low footbridge immediately below them, so that the beams of the lower gates are at shoulder height as you walk over the bridge. Unique as far as we know. 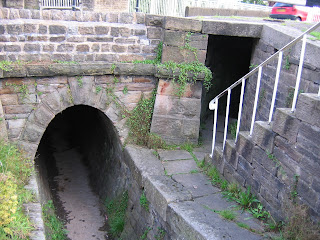 Sure we will have shown you this before, when we came DOWN this flight in 2008, but Lock 13 has 2 unusual tunnels under the road below it. One is straight and high, ideal to lead a horse through to meet up with the boat below the bridge. The other is a quick ‘nip-through’ for the boatman wanting to get back on board immediately below the lock, but still under the bridge. There is only a very narrow way to get out back onto the towpath! 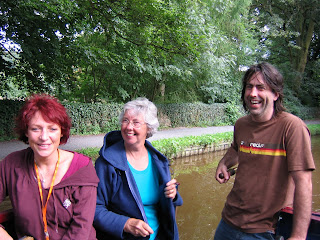 Adam and Rachel managed to fit in a day’s visit, and they also brought 2 very welcome packages with them – Dave’s cameras, repaired by Canon under special warranty due to a latent defect. We had been sharing Val’s camera since Sheffield! 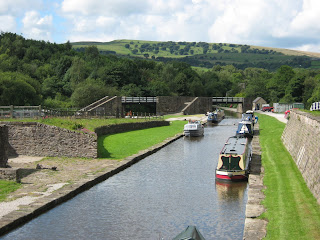 We took the opportunity to pop up to Bugsworth, look around the historic Basin and have a good meal at the Navigation Inn. Last time we were here, it snowed – in April! Then we turned ‘Zindagi’ around and came back to Marple. Adam & Rachel had to get on their way to the Lake District!
Only 4 weeks behind now – nearly there!
Posted by Dave and Val Taylor at 9:00 am