To The Summit – And Beyond! 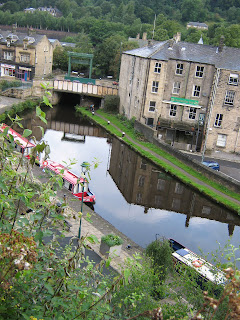 Back in Todmorden after Shireen & Thor had left us, we turned 'Zindagi' around, did some shopping and waited for our next visitors – Jeremy and Laura. Meanwhile, time to get some more nearly aerial pictures from the steep valley sides. This is the wharf, with the green guillotine gate of Library Lock at the top of the picture, and 'Zindagi' at the bottom right. 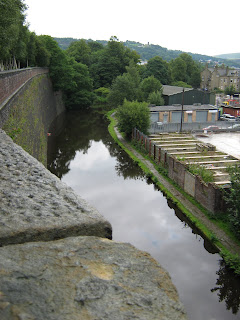 And here is 'The Great Wall of Tod' from the top! 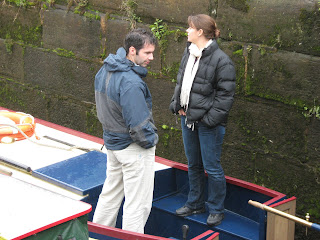 No sooner had J and Laura arrived, than we started up the locks out of Todmorden again. This was not going to be another 'there-and-back' journey, though. They had opted to move the car on as we travelled up to the summit and began the journey down the western side. An ideal stretch of canal for this tactic, really, as the actual distances covered each day are not great as more time is taken up with lock working. 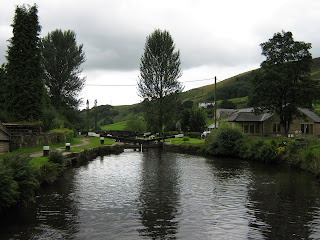 With more 'hands on deck', and especially without so many other boats on the canal, we made rapid progress as far as the chippy in Walsden – just nicely in time for tea! We had phoned British Waterways to book our passage over the summit for the Sunday morning, so that left Saturday for us to travel the remaining 8 locks and 1½ miles. 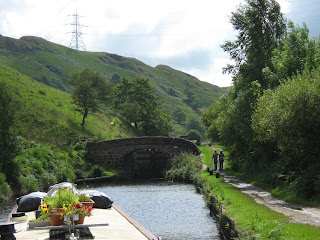 That should have been easy, but we had quite a delay as part of the canal was nearly dry! We had to let some water down to fill the curving wide section where we had moored with Shireen and Thor a few days before, and needed to let more down from higher above that as well. All good practice and quite interesting – if time-consuming! 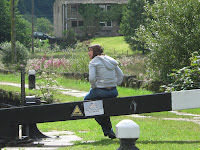 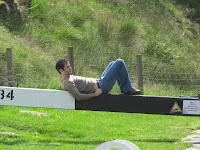 In the end, thanks to dedicated lock work by J & Laura (more than the pictures show!), we approached the summit lock by lunchtime, crossing the county boundary just after the previous lock. 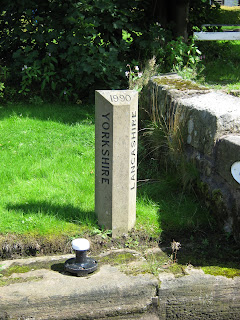 . . . but surely it should be 'Greater Manchester' now? No, don't go and change it, 'Lancashire' is just fine! 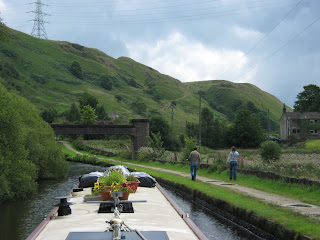 For the first time in miles, we could see the hills on the skyline getting lower! We had reached the 'pass' through the Pennines which the canal surveyors and engineers had identified as their way through seemingly impossible terrain. 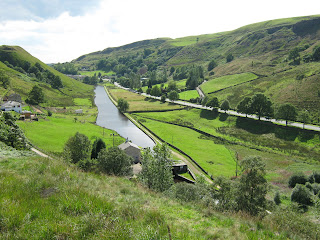 After lunch, clear skies tempted us all out for a walk up the hillside. Two of us walked up, sat for a bit and walked back down. Two others just walked and walked . . . What a view, though! You can see the short summit level and 'Zindagi' is just hiding behind the trees below the lock at the bottom right of the picture. 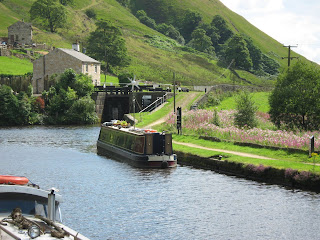 We had been warned to be ready for 8:30 the next morning and, sure enough, the lock-keeper appeared, emptied the lock for us, saw us through and said "See you at the West Summit Lock". So off we went, chugging along at 600 feet above sea level . . . 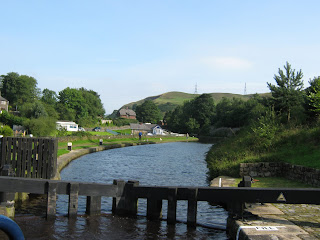 . . . only about half a mile before we reached West Summit. This must be one of the shortest summit pounds on the system – no wonder they have sometimes had water shortages. In fact, the 'lockie' said they had been OK for water through the summer, despite the earlier fears, and he was surprised how few boats had been coming through the summit. 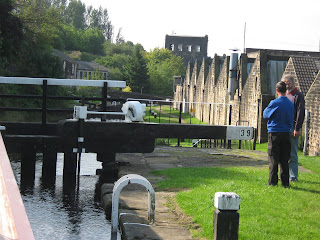 As the Leeds and Liverpool Canal had closed from early August, we thought more people might have diverted to the Rochdale. Perhaps some boaters were put off by false rumours of the Rochdale closing too? We had been told once or twice that it was closed, but had the reassurance of the British Waterways email updates to know that it was definitely staying open! 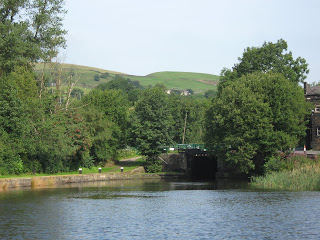 The only 'down' side to the western side of the Rochdale is the need to keep moving. Due to water supply problems and maybe lock conditions, no boats can stop from the East Summit (Longlees Lock, No.36) all the way over and down to Sladen Lock (No. 44). That's 9 locks (but only 1½ miles!), where it would have been nice to dawdle a bit. Having taken our time UP the Yorkshire side, dashing down the 'Lancashire' side came as a bit of a shock! 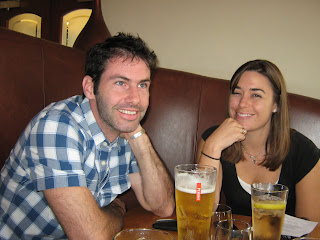 We had known about that in advance, so J and Laura had moved the car on to Littleborough, where we hoped to find an overnight mooring. A good quiet spot, just below Lock 48, the last lock for 3½ miles. Time to moor up and find a nice place for Sunday lunch together, before they had to drive back to London. Just 3 days from Todmorden, but we had been through some stunning country and really enjoyed our time together.
We ARE catching up with the blog story! We crossed the summit on 15th August.
Posted by Dave and Val Taylor at 9:00 am

This certainly looks like an area worth chugging along.Beautiful.