Rushing Down To Manchester! 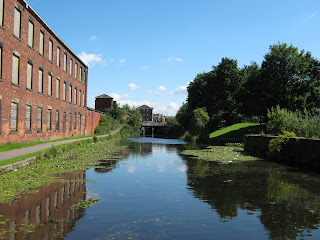 After our enforced dash down from West Summit Lock, it was good to take it slowly for another day – but we knew another marathon was coming soon!
Down through the seemingly forgotten backwaters of Rochdale, through a short stretch of countryside near Slattocks, and we were getting into the Manchester suburbs. 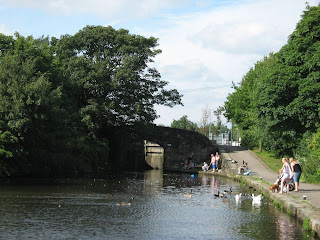 We moored on Monday night just outside Chadderton, but not before we had done battle with a faulty lock! There was either damage to the bottom gates’ sill, or else something was stuck against it – either way, there was so much water getting OUT that we couldn’t completely fill the lock! In the end, we rigged up a rope between one of the top lock gates and a bollard and Val used that leverage while Dave pushed the gate itself. It opened – against about 3" of water! When we emailed BW about it, they said they were due to look at it on the coming Friday – so the canal would be effectively closed for 4 days! 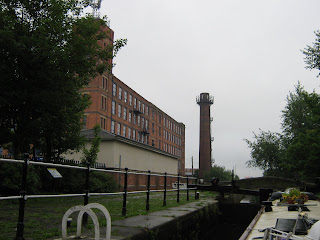 We had a deadline to meet, though. Once again we were required to ‘book our passage’ through some locks – 19 of them, from Failsworth down to Ducie Street in Manchester, and were supposed to be at the top one for 8:30 am! We allowed the recommended hour but were still late. Fortunately our ‘shadow’ had not given up on us and was grabbing a bite of breakfast as we arrived! 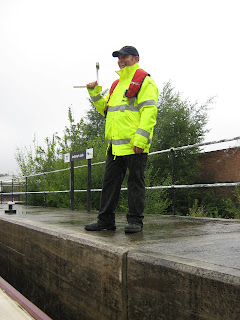 Much as we would have preferred to take our time down these locks, we couldn’t have asked for a better ‘shadow’ – Billy was great company, a real enthusiast for his work, and the locks flew by as he and Dave worked them and Val took the boat on through. If anyone at BW is reading this, please make sure that Billy gets a permanent job with you – he is a genuine asset! 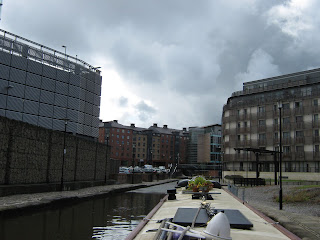 We made good time – not surprisingly – and said goodbye to Billy at the last lock before Ducie Street Junction. Just round the corner to the left, under the brick building in this picture, we moored up at the beginning of the Ashton Canal.
We ARE catching up – this was only 4½ weeks ago!
Posted by Dave and Val Taylor at 11:36 am