Over The Top Again – Twice More ! 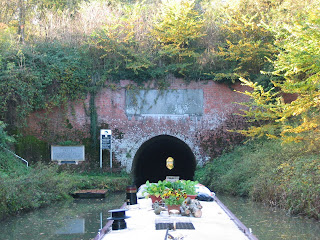 Once we had climbed the Crofton flight, we reckoned on a couple of days of westward travel before we should turn round in order to be able to meet Terry and Di back at Kintbury, so we went on, through the 500-yard Bruce Tunnel and down the Wootton Rivers locks that afternoon – a bit too far! There were some nice moorings just near the village of Wootton Rivers, but we thought we could just go on a little further before the light failed. We ended up having to moor a long way out from the bank, only JUST able to get on and off the boat without getting very wet! 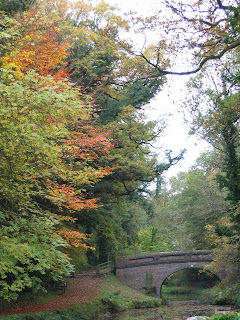 Never mind, we didn't fall in, and were soon enjoying the scenery of the Vale of Pewsey, though we didn't stop at Pewsey Wharf this time. Not only did the trees give us a brilliant autumn display, but we soon caught our first glimpse of the white horse on the hills near Alton Barnes. When we were first here five years ago, Dave remembers thinking that there must be more than one of them, as we kept seeing it from different angles as the canal twisted and turned. No, there is just one! We needed more diesel soon, and were able to buy some at Honeystreet, though the boatyard's supplies were low, so they could only let us have 50 litres. Not enough to fill the tank, but enough to keep us going for a good while! 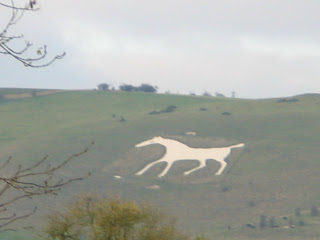 We were going to see the white horse again soon, as we decided to turn around just after just the village of All Cannings, and headed back through Honeystreet to Pewsey. This time, we did stop, filling the water tank while Dave nipped into the town to do some quick shopping.

We knew where we wanted to moor that night – NOT in the stretch of canal where we couldn't reach the bank, but at the moorings just above the bottom lock at Wootton Rivers. Very nice too!

The next day, we were cruising back through the little Bruce Tunnel and down the Crofton flight again, getting to Great Bedwyn before it got dark. That's when we heard from Terry and Di about their change of plans – they couldn't come and meet us after all! There was no need to go back to Kintbury, so we stayed and enjoyed a couple of days in Great Bedwyn, including a most enjoyable Sunday lunch at the Cross Keys, one of the most relaxed and easy-going 'front room' type pubs we have been to.
Fortunately, there is room to turn a narrowboat at Great Bedwyn, so we turned and set off towards Crofton again on the Monday morning, expecting to get over to Wootton Rivers again by the evening. Arriving at the lock next to Crofton Pumping Station, though, we were greeted by another boater whom we had seen earlier as he started off before us. Tony gave us the news that there was a problem with the lock and we were unlikely to go much further that day! We watched and listened as the British Waterways guys poked and tried to shift something that was holding the bottom lock gates open a little, allowing the water out as fast as the top paddles would let it in! They talked of maybe needing to get divers in the next day, but apparently Alistair would come and sort it all out in the morning –they hoped! 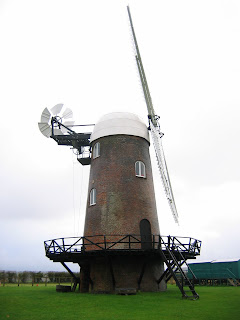 Another boater who was 'stranded' above the same lock but had her car nearby kindly offered a lift into Marlborough if we needed any shopping, so that was very useful, but we were still stuck for an unknown time while the lock was out of action.

You may be wondering why there is a picture of a windmill here. We were not in Norfolk or the Fens again but, sure enough, on the hill opposite the pumping station and just above the little village of Wilton, there stood a fine brick windmill! It turns out that it was built in 1820 with all the benefits of the lastest technology of the time and with 700 years of windmill history behind it – but why? The answer is very much canal-related!
Some of the local watermills had been demolished or had lost their powerful water supply as a result of the building of the Kennet and Avon Canal. Apparently the windmill thrived for about 30 years until it too was superseded by the more powerful steam mills and fast rail transport, falling into disuse in 1908. Like the canal, it has been restored, but doesn't get the same amount of use! 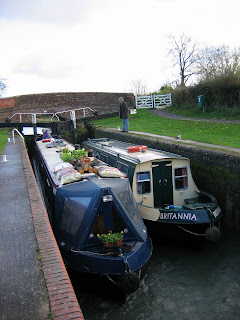 As promised, Alistair turned up the next morning and started to investigate the lock problem again. No need for divers; after very thorough probing, he shifted half a brick and some smaller stuff and thought it was worth trying to see if the lock would fill. If he was happy to try that, then Tony and we thought 'why not have a couple of boats in it at the same time?' So Tony's 'Britannia' and 'Zindagi' slipped into the lock, not knowing whether we would have to back out again if it didn't fill properly.
Happily, it worked! Britannia and Zindagi moved out of the lock to proceed up the rest of the flight, and the other stranded boat moved in to go down. At the top of the locks, we decided to stop, but Tony pressed on. He had a deadline to meet. He texted us later to say that he made it to Pewsey at 5.25 p.m. in the dark!
The next day, we chugged on to All Cannings, stopping on the way at Pewsey for water and another quick dash into town for Post Office and shopping. Our little detour was over and we were ready to continue westwards . . .
Posted by Dave and Val Taylor at 5:20 pm