Joining Up The Ends 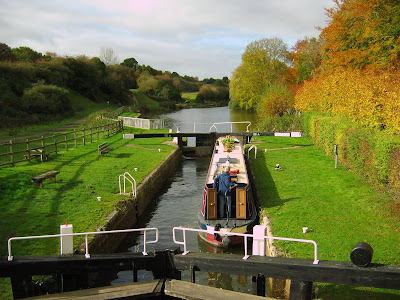 When we re-started canal boating in 2004, our shared-ownership boat was based initially at Trowbridge on the K&A and, because we normally only had it for a week at a time, our 'range' was limited. We had never come very far east, only getting as far as the top of the flight of locks at Crofton.


Now we were beginning to get a little closer, but we were still in 'new territory' for us as we made our way through Kintbury and on towards Hungerford. Gradually the River Kennet was becoming less and less in evidence as the navigation subtly changed itself into a canal. Here we are at Dunmill lock, autumn colours still very much on show. 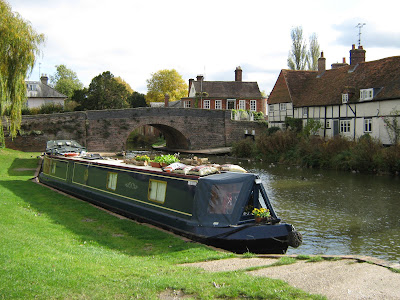 Soon we arrived in Hungerford, only to realise that we were running low on diesel. We should have checked earlier, but we now realised that there were no boatyards selling diesel in the 27 miles between Newbury and Honeystreet. There was only one thing to do, so Dave made 3 trips to a convenient filling station with our 20 litre jerry can on the frame of Val's shopping trolley!

Hungerford's visitor moorings are very attractive and, apart from walking to the filling station, we also enjoyed a short 'wander' up the high street. We expected to be back here again soon, as we were planning to meet up with Terry and Di, Val's brother and sister-in-law, and a trip from Kintbury to Hungerford and back seemed about right. Meanwhile, we were going to continue westwards for a while. 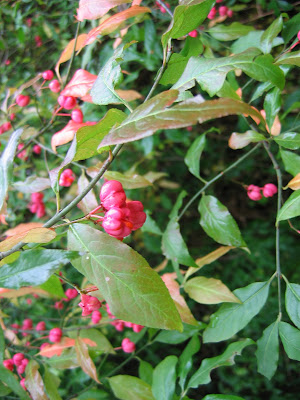 Autumn was still moving on, and there were more spindle berries in the hedgerow – what a unique colour! Apart from a VERY few that we have seen in Devon over the years, we don't seem to have seen this many since childhood years. Maybe it's just that we haven't been in the right place at the right time, maybe it's the season, or perhaps the soil round here suits spindle bushes really well!

Anyway, we continued west (now actually a bit more south-west) through some places with lovely names, like Froxfield, Little Bedwyn and then Great Bedwyn, before pressing on towards Crofton.
Back in 2004, when we were approaching Crofton from the west, Val's knees had been showing early signs of trouble, 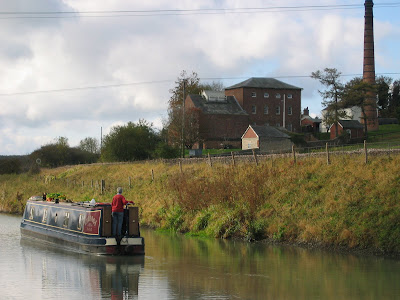 so Adam and Dave had left her with the boat above the top lock and had walked down the locks to see the old pumping station. It was closed then, so we had not been able to see inside, and had just walked back up the hill, turned the boat around and headed back westwards towards Pewsey.

This time, Val was very much in the picture as she took 'Zindagi' in front of Crofton Pumping Station towards the bottom lock. Not much hope of finding the pumping station open to visitors at the end of October, but we had heard an interesting story about it. Back in July, the electric pump (which normally pumps water up to the summit level) failed and the canal had to be closed to boats. Then British Waterways asked whether the old Pumping Station could help, so volunteers kept it running for several days and boat traffic was able to move again. Read the whole story here. It looks fascinating – we shall just have to try to visit some time when visitors are admitted, and preferably on a 'pumping day'. 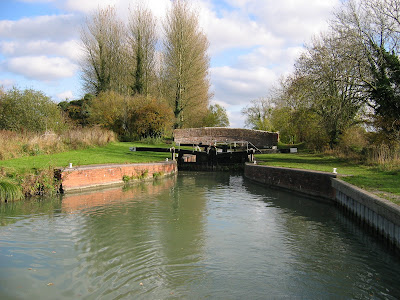 There was just the matter of six more locks, and we had 'joined up the ends' of our earlier and current boating trips. We reached the top lock of the Crofton flight, found a pleasant spot to moor, and stopped for lunch!
Posted by Dave and Val Taylor at 9:26 pm

Alan just happened to say yesterday 'I wonder where Dave and Val are and if they are moored up for thye winter' so prompted me to come and take a look.

Celebrating our 50th wedding anniversary this month so had occasion to look at the photos of our 40th and 25th with memories of you both at the 25th.

Yes, Barbara, we are still chugging on, though the blog is still a little way behind our actual travel. We are in Bath at the moment, soon heading back eastwards.