No Further West – This Time! 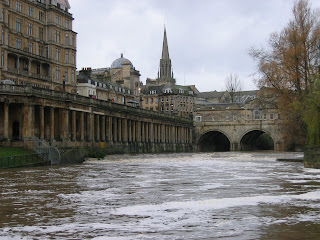 Back in Bathampton, we needed to move off the moorings where BW had kindly let us stay for a week and not just two days, so we chugged on a bit towards Bath (not far away, anyway) and found a space where we could stay for up to 14 days. We were still hoping to get down on the River Avon and maybe travel as far as the outskirts of Bristol before coming back, but it all depended on the state of the river. So, every day or two, Dave walked down the locks and had a look at the river. Here's Pulteney Bridge and Weir, but the picture doesn't really show how much water was coming down – far too much to even think about taking a boat on it! Tony's boat was moored up on the river, and there it would have to stay until conditions were safe enough for him to move it to the canal. It was straining at its moorings but looked pretty safe.
After a trip along to a 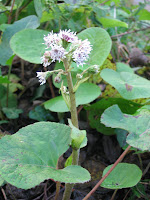 boatyard to get some diesel, we moored on the 3-day mooring 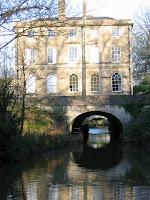 s a little closer to the city. Apart from being rather better moorings, that made it a bit easier for Val to walk into town. We didn't need to stay very long, because we were expecting visitors and needed to go and collect them. Meanwhile, Dave had the opportunity to wander along the canal and see butterbur in flower (well out of season!) and more of the architecture. Cleveland House used to be the headquarters of the Kennet and Avon Canal Company, and apparently had a trapdoor in the top of the tunnel through which paperwork was passed between boatmen and clerks. We can't see any sign of it now!
So, who were our visitors? Shireen and Thor, coming down all the way from Glasgow to see us! All we had to do was travel back to Bradford-on-Avon to meet them on the train – no problem! As you can see, they are both in fine fettle, and Thor likes his food! 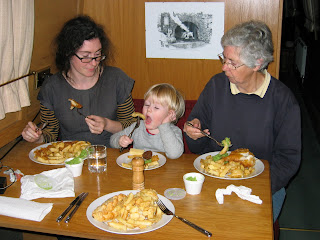 The rain went on falling, though not ALL the time, but it was still too wet for Thor to get out and enjoy the towpath very much. When he did get out, his dislike of wellies was soon tempered by the realisation that they gave him a licence to splash in puddles!
All too soon, they were on their way back north again and we too realised that we had better start our return journey. After a day or two more in Bath, still waiting in vain for useful responses from the battery manufacturers, we decided to start eastwards. The Avon had gone down briefly (enough for Tony to get his boat off it and onto the canal) but, if we had gone downstream then, we would probably still be there, waiting for the levels to subside again, because it soon rose again.
We have often wondered about travelling on the Severn Estuary between Bristol, Portishead and Sharpness. Not an easy passage, and not to be undertaken in poor weather or without the guidance of a pilot! We had not considered it this time, even if we HAD reached Bristol. But . . another time? Wait and see!
Posted by Dave and Val Taylor at 9:35 pm