Down the Avon Valley 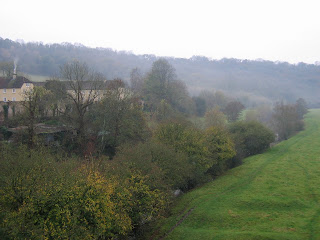 From Sells Green, the Kennet and Avon Canal seems to wander slowly through the countryside, and gradually down a few more locks until it gets to the edge of Trowbridge. Just past there, the River Avon appears from the north and, although it disappears again quite soon, the rest of the canal down to Bath follows the Avon valley closely. At Bradford-on-Avon, after going down the last lock before Bath, the canal soon finds itself going along a ledge on the wooded side of the valley. Then, at Avoncliff, the canal suddenly takes a right-angle turn and crosses the river and railway on the magnificent stone aqueduct built by John Rennie. You can just see the river hiding in the trees which line it as we look down from the canal's elevated position.
After just less than three miles of travel on the other side of the valley, the canal once again takes a flying leap over rail and river, this time over the Dundas aqueduct (an 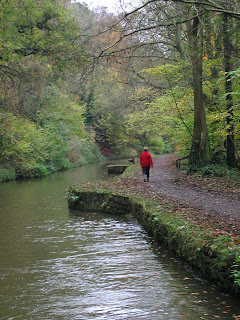 other Rennie masterpiece) to Dundas Wharf, where a ¼ mile arm is all that remains of the Somersetshire Coal Canal, originally planned to reach Radstock, though it never did so. The main line of the K & A continues northwards towards Bath.
It had been raining for several days (or was it weeks?) and we could see that the river was fairly fast-flowing. Would we be able to get down on the Avon when we got to Bath, or would it be too full? Although we didn't really want to go all the way down into Bristol, perhaps it would be nice to go down as far as Hanham . . . A quick check with Tony (who had reached Bath some time ago) told us that there was no point in hurrying as the river was definitely too high at present.
So we dawdled! This part of the canal is set in some of the best scenery, only slightly marred by the fact that the high valley sides make mobile phone calls (and our internet connection) a very uncertain operation. At Dundas, the best place to make a phone call was in the middle of the aqueduct – not so good in the pouring rain!
A few days earlier, we had co 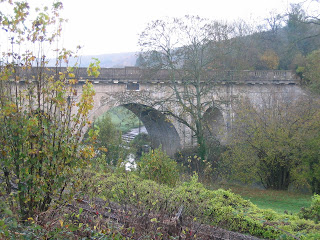 ntacted the manufacturers of the 'leisure' batteries on Zindagi, as we had been having some problems for several weeks and they seemed to be getting worse. The batteries didn't hold charge properly and seemed to be very thirsty for topping up with distilled water. We had an email back that recommended us to take the batteries off the boat and give them a high charge "and everything should be fine". Easier said than done. This is our home, and taking the batteries out would be like disconnecting your house from the mains! About the only thing that would go on working would be the woodburner! Still, the batteries were definitely not right, so it seemed the best thing to do. We needed to find three things: 1) someone who could charge the batteries for us 2) somewhere to moor the boat that would be accessible and safe and 3) somewhere else to stay for a few days. 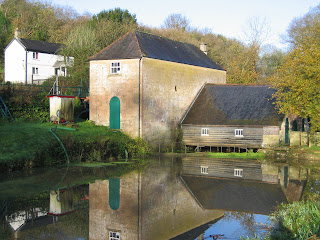 Bathampton seemed like a good place to aim for, but the moorings there were restricted to 48 hours only. We chugged on anyway, searching the internet and making phone calls to find possible battery specialists in the area. Hidden away below the canal and just next to the river at Claverton is Claverton Pumping Station (another pumping station we have never been inside!), which is another John Rennie design, using a waterwheel driven by the river to pump water up to the canal – unique!
Posted by Dave and Val Taylor at 11:35 pm