Back Down Into Lancashire 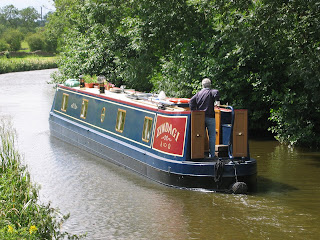 So, freshly 'black-bottomed', Zindagi set out over what had become a familiar route from Skipton, up through Gargrave and the Bank Newton locks, through the lovely wild bit there and on up the Greenberfield locks to the 'summit level' and Foulridge Tunnel. We have really loved our time on the stretch of canal from south of Silsden up to this top section, and our visitors seem to have appreciated it too.
We first came up this way on 12th June, and so have spent about 5 weeks or so just coming and going – great! But now it was time to move on; not stopping and turning around this time, but heading through Foulridge and down into industrial Lancashire the other side! We had already been welcomed into Lancashire on the top section, but now we started our gradual descent through the former mill towns on the western side of the Pennines. 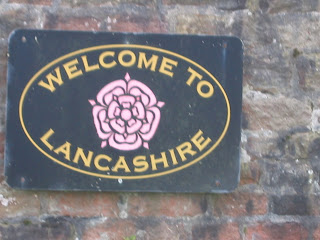 Not so much 'loitering' now – we had an appointment to keep as we had booked our passage up the Ribble Link for the 2nd of August and had a few miles to cover in the meantime. Some new territory, including some great views looking north-west to the Forest of Bowland from near Clayton-le-Moors. Again, the character of the canal had changed; here the countryside was bleaker, in a windswept 'moorish' way. Certainly not so many holiday hire boats along this section – perhaps the proximity of the mill towns puts off hire firms from opening bases in this area? We made our way through Burnley, passed the halfway point of the Leeds and Liverpool Canal, exactly 63⅝ miles from both Leeds and Liverpool, and came to Blackburn. 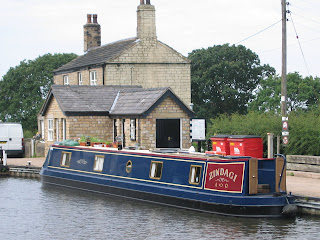 And so we came back, 'full circle' to Wheelton, where Zindagi was fitted out all those months ago. It was good to say hello to some of the team at Classic Narrowboats again; they were so busy that we couldn't moor alongside their yard, so here is Zindagi just across the canal, where we stopped to fill up with water. 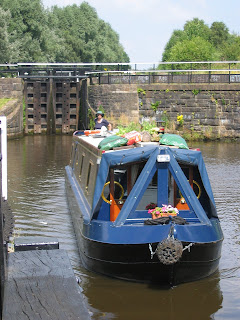 Strange to come this way again, down the locks at Wheelton (the first locks we had come through on Zindagi) and on down towards the flight of 23 locks at Wigan. We had been to so many different places and met so many different people since we set out almost exactly 16 months earlier. Our life afloat had been all new to us then – now it feels normal!
Last time we came down the Wigan flight, it had been cold and raining. Now it was bright and sunny, most of the time anyway, and Val seemed to get mild sunstroke! When we reached the bottom, several hours later, we turned right (towards Liverpool) instead of left (towards Leigh and Manchester, as we did last time), and so were on 'new ground' again.
After a day off to recover from the long haul down the locks (and the sunstroke!), our journey took us on past Wigan Pier, where coal 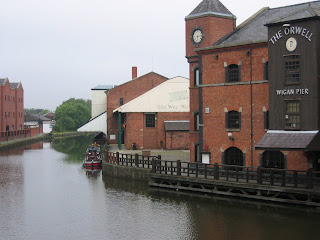 used to be unloaded to be taken on the canal to Liverpool for export – how times change! All the old coal staithes are long gone and even some of the modern visitor attractions which replaced them have also closed!
Posted by Dave and Val Taylor at 10:38 am