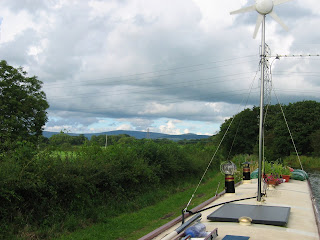 Back in May, we were up in Ripon, which is nearly the northernmost point of the English canal system. In fact, since it was built it was the furthest north that anyone could get on the connected canals and rivers of England and Wales – until 2002! The Lancaster Canal was built from Preston up to Kendal on the edge of the Lake District in the late 1700s, but the 'temporary' tramway that linked Preston to Chorley was never replaced with the intended canal, and was itself eventually abandoned. So the Lancaster Canal remained landlocked all its life until the Ribble Link was built in 2002. By this time, the very northern section from Tewitfield to Kendal had been closed to navigation and culverted under the M6 in several places, but Tewitfield is still slightly further north than Ripon! 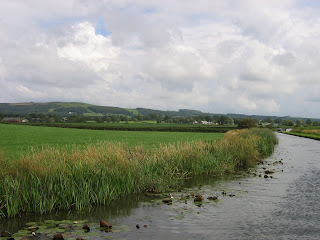 Heading north, we began to see some distant hills, but these were the Forest of Bowland, part of the Pennine range, which we had last seen from a different angle near Clayton-le-Moors. The countryside round here is slightly more 'rolling' than south of the Ribble, but generally flattish with hills in the distance. The canal seems to follow the coast fairly closely, and there is even a 2¾ mile arm down to the little port of Glasson on the Lune estuary.
After 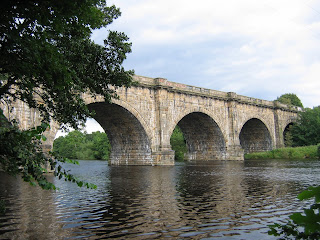 skirting Lancaster, we crossed the Lune on the impressive stone aqueduct and soon found ourselves almost on the edge of Morecambe Bay with its vast expanse of sand and mud, famous for its shellfish and sadly remembered for the tragedy there in February 2004, when 18 cockle pickers were trapped by the fast rising tide and lost their lives.
We caught a misty glimpse of the Lake District hills in the distance, but the weather closed down and we have had to enjoy the sunny spells whenever they pop up. 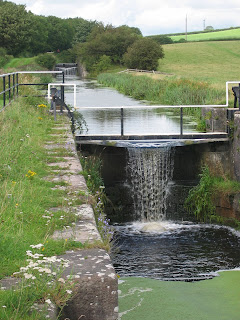 A few more miles of chugging and we passed Carnforth and reached the real northernmost point at Tewitfield. There are plans to re-open the canal from Tewitfield up to Kendal, but opinion seems to be divided as to whether it is really likely to happen 'any time soon'. No doubt funding is the major hurdle! The locks at Tewitfield are still in remarkably good order and don't look as though they would take much to get back into use, but there are several places where the canal disappears into pipes under the M6, and those would certainly be very expensive to restore!
Despite the weather, we decided to take advantage of our bus passes and our closeness to the Lake District, and hopped on a bus for a trip into Kendal and Windermere. If the weather had been better earlier in the day, we would have probably have gone on to Keswick. As it was, we enjoyed the ride and (just for a change!) took a trip on a boat on Lake Windermere. The picture gives you some idea of the weather conditions. 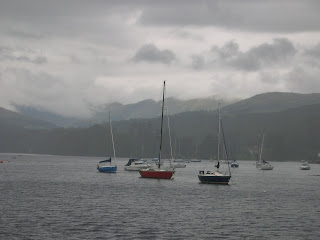 On the 'outward' journey from Bowness to Ambleside, we sat in the open seats on top of the boat but were glad to be under cover for the return trip!
Needless to say, after the northernmost point, the only way was to head south, back towards the Ribble Link again, but there was an interesting diversion to take down the Glasson Arm, through 6 locks, the only currently functional ones on the Lancaster Canal.
Enjoyable as lock-free cruising can be, it was good to be operating some locks again, working our way down fairly flat countryside to the tiny port of Glasson, which was originally built as a port for Lancaster and still has enough coastal traffic to keep it running. 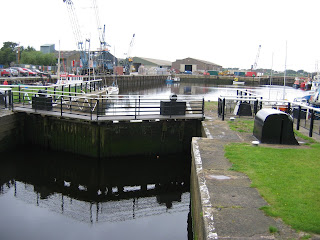 We moored in the enormous (12 acre) basin opposite rows of sea-going yachts and had a little wander around the tiny village. That did not take very long so, after filling up with water and diesel, we made our way back up the locks the following day. An enjoyable little excursion!
On our way up the locks, the sun was shining a little more, enough for this Red Admiral butterfly to pause on the ragwort. We were now really on the 'home run' back to the Ribble Link but were in no hurry as we had allowed ourselves more time than we really needed.
As I write this now, we are moored up in the basin at the top of the Ribble Link, ready to start the return crossing tomorrow morning at about 9:45. 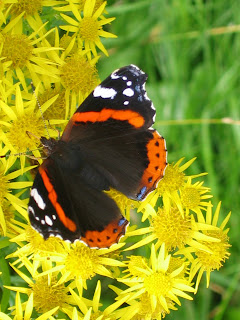 We have heard a rumour that today's crossing was cancelled due to high winds, but it seems OK at the moment. We shall just have to see what the British Waterways guys say in the morning!
P.S. We have heard over the last few weeks that the Rochdale Canal has been closed due to a serious pollution incident. News today that it may be re-opened on a trial basis to see whether the pollution has been effectively contained. We have been wondering whether to go that way after all, as there are lots of locks which will not help Val's knees and wrist. We shall need to make a decision in the next few days!
Posted by Dave and Val Taylor at 10:56 pm

Interesting to catch up. Can't believe you are still chugging along.
We were in Ripon last month staying with friends after a weeks holiday in Yorkshire.

Yes, Barbara, we are still going strong, though a bit behind with the blog. Another episode due very soon, and in preparation at the moment!