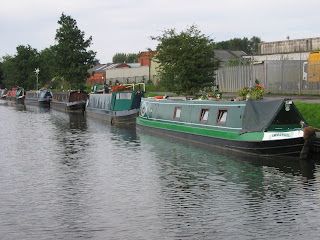 We arrived in Tarleton in the late morning of 1st August, in plenty of time for crossing the Ribble Link the next day. There were a few boats on the moorings, but we didn't know whether any of them were due to cross with us. After wandering into the town and having some lunch, Dave went to see Harry the lock-keeper to tell him we were there and get any necessary information. After a very helpful briefing, Harry said we should come down to the tidal lock at about 11 a.m.
Later in the day, we met Peter and Avril on 'Four Winds', who had also been to see Harry and been given 11 o'clock. As the lock takes two boats at a time, we imagined that 'Four Winds' and 'Zindagi' would be the first two in and that the other boats would be given staggere 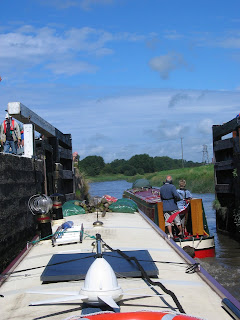 d times after that. Gradually the moorings filled up as five of the six boats in our 'convoy' arrived.
Come the morning, we found that ALL of us had been told 11 o'clock! About 10.30 or so, the sixth boat came past us all, heading for the lock. When we told them that Harry had said 11 a.m., they didn't want to know! Result: at 11, all of us were waiting around at the lock, and those who had arrived first had to wait!
'Four Winds' and 'Zindagi' were the second pair of boat through the lock, and we were warned to give the engine high throttle as we faced the tide racing up the Douglas. It seemed as though we were almost standing still (relative to the ground) as we battled the oncoming current at 2000 r.p.m. engine speed – we normally cruise at between 1200 - 1600 r.p.m. ! 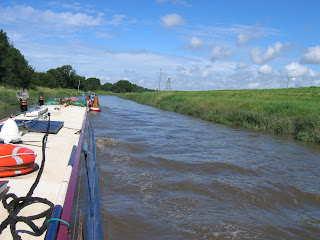 The snail's pace (with racing engine) continued for quite a while until the river channel widened out a bit, but we could see that Peter and Avril ahead of us were going at about the same speed, and the next pair of boats were not yet in view behind us.

As the River Douglas widened out into an estuary, we were starting to catch up with 'Four Winds' and the warning light and bleeper told us that our engine was overheating a little, so we ran off some hot water from the taps and slowed down to about 1800 r.p.m. The bleeping soon stopped! 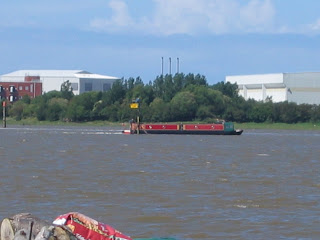 As instructed, we were aiming for the buildings across the other side of the Ribble, but it was still quite a surprise when we saw that the first couple of boats were turning right to go up the estuary – we hadn't seen the channel over the mudflats! Then 'Four Winds' turned round the marker lamp and we were next. 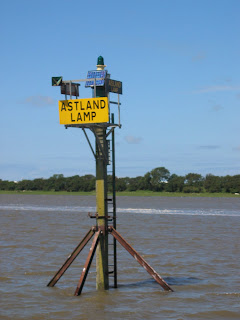 Coming to the 'Astland Lamp', we looked left and realised that we were looking right out to sea – could we see the curvature of the earth? It certainly seemed that way. No doubt that this was Zindagi's first taste of salt water! Turning right, we could see the distant skyline of Preston, but we were definitely on the widest body of water of our travels so far.
High tide was roughly at the time we rounded the lamp, so now we began to face the ebb tide down the Ribble but it was nothing like the tide we had faced coming down the Douglas, so our progress to the mouth of the Savick Brook was fairly quick and uneventful. We turned left and north into this little river which has been turned into the actual 'Millennium Ribble Link' from the Ribble to the Lancaster Canal and soon came to the Sea Lock, where the British Waterways guys waved us through. This is more like one of the Thames Barrier gates than a lock, as it rises out of the bed of the river as a flood defence. 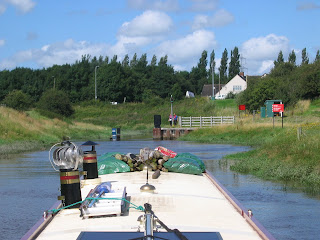 One of the problems of using the Savick Brook for the link is that there are existing obstacles along its route. One of these is the road bridge above the Sea Lock, and all six boats had to wait there for nearly an hour until the tide had fallen enough for us to get under the bridge!
After that, we found ourselves threading through a narrow, reed-lined channel – good job that boat traffic on the Link is only one way at a time! Then through five fairly ordinary locks until we came to the 'staircase' flight of three at the top. 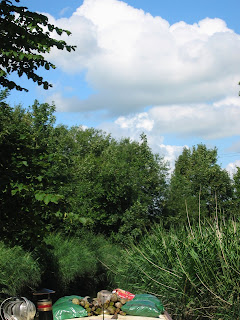 In a 'staircase' flight, the top gate of one lock is the bottom gate of the next one up, so you really do change levels fast. The British Waterways guys were there to take us up the staircase, but one interesting quirk was that we had to enter the locks backwards, as the turning basin at the bottom was not very big and had apparently silted up a lot anyway. Harry at Tarleton had told us that the staircase locks were originally intended to be each 60 feet long, but the design had been changed later to make them 70 feet long. Harry's story was that no-one had thought of moving the top lock 30 feet further back to accommodate the extra length, and that is why the bottom basin is so small. Tall story or the truth? Who knows?
Since our wait at the bridge, we had been travelling up the locks with Dave and Dot on 'Olan Pendragon', 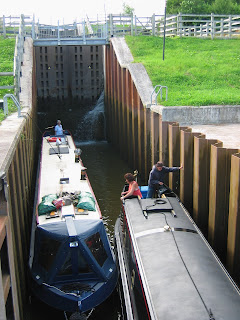 and here they are, edging in cautiously backwards next to 'Zindagi' in the bottom lock of the staircase. You can see the height of the lock and the rather basic finish to its walls. All the 'Link' locks were constructed the same way.
Finally, then, we reached the top basin and came out onto the Lancaster Canal just after 5.30 p.m., 6½ hours after we met at the lock at Tarleton. Quite an adventure, to be repeated in the other direction on the 20th of August!
Posted by Dave and Val Taylor at 10:23 am

So you are still boating. We have just returned from Yorkshire which you will know of course if you ae following my blog.