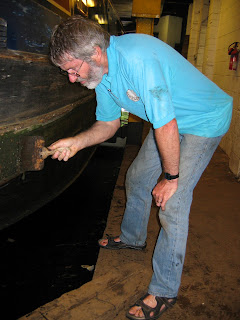 Since earlier this year, we have been increasingly aware that it would be a good idea to 'black' the bottom of the boat. As with all steel boats, it had a coat of protective bitumen on the hull when it was new, and this normally needs to be renewed every couple of years. It seemed like there were too many rusty spots showing on ours already, but when we talked with Ian at Pennine Cruisers in Skipton, he reassured us that this was not unusual, as the first coat often doesn't 'take' very well. We had spotted his cave-like dry dock on the way into Skipton and so, after checking available dates and that it would be OK for us to go on living on board while in dock, we booked in to hire the dry dock and do the work ourselves – useful education, as well as saving some money!

It all fitted very well. We arrived back in Skipton on the Monday afternoon and moored close to the railway station again. 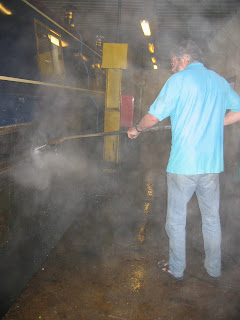 After seeing Shireen and Thor off on the train on Tuesday morning, we chugged about a mile along the canal to the dry dock, reversed in, and very soon Zindagi was jacked up ready for us to start work.
The first job was to scrape off the worst of the sludgey weed growth. This gets worse on rivers, where the water is fresher, and in fact there was less on Zindagi's hull than there had been only a few weeks ago on the Ouse. Rather a messy job, but soon followed by a bit more fun with the pressure washer! The cloud of spray gives you some idea of the force of that jet – it removed the remains of the weed growth, any loose paint, and even the rust!
By Tuesday evening, the hull was dry again, ready for the first coat of bitumen. The pressure washer had really done well, though now the hull really looked like it needed blacking! Although the bitumen can be put on with a roller, we were recommended to use small stubby brushes for the first coat, painstakingly making sure that the coating got into every little crevice. Here's Val doing her bit, and you can certainly see the difference between the freshly-stripped hull and the rich satin black of the new coat.
We only managed half the boat that evening, and so continued on the Wednesday morning and finished the first coat all round. By that time, the first half was ready for its second coat, which went on with a roller, just using brushes for the edges and tricky bits – much quicker, so there was time to do the second half in the afternoon. This was ideal, as it gave nearly 48 hours for the bitumen to cure before it went back in the water.
Meanwhile, of course, we were still living in the boat, but in rather different circumstances. As it was jacked up, it didn't rock when we moved around, as it usually does. As we were effectively in a cave under the timber yard above, when the fluorescent lights were off it was really dark and we needed an alarm to wake us in the mornings. And then, of course, we were several feet off the water and the ground, and had to get in and out with a ladder! 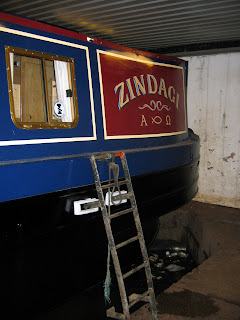 Finishing the blacking early meant that we could get on with a few other jobs, like touching up some paintwork scratches and making sure that the front and back fenders (bumpers) were attached a bit better.
By Friday mid-day, we were ready to go again, and it was a much sleeker-looking 'Zindagi' that emerged from the dry dock. Inevitably, even by the time we had gone down the canal to turn around and come back to settle up with Ian, there were a few marks on the nice new bitumen, but they do say that boating is a contact sport! Besides, we have some left over in the can, so we can do some touching up just as we normally do when the lower bits of blue paint get scraped, as they always do, however careful we are in locks or when mooring up .
Posted by Dave and Val Taylor at 11:40 pm