Dawdling Down The Douglas Valley 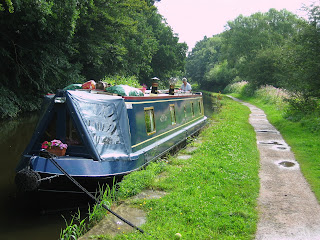 As we made our way out of Wigan, we were aware of the little River Douglas running parallel with the canal, looking like little more than a wide ditch. Hard to believe that boats once used to navigate it right up to Wigan! We soon found ourselves in a delightful wooded valley, with the Douglas still alongside. By now it looked like a proper little country river, though it was still difficult to see how boats could ever have used it. Here we are, moored next to Otters Croft Wood near Gathurst.

Contrasts here as well, though, as the M6 soared overhead above the otherwise picturesque paired Dean Locks. 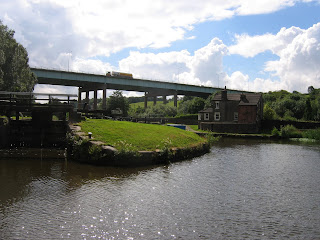 By now, we could see that we had plenty of time in hand before we needed to be in Tarleton to make our crossing of the Ribble Link on 2nd August, so we could simply dawdle along this section of the Leeds and Liverpool Canal. We have certainly seen a wide variety of scenery since we joined this canal in Leeds back in early June, but this was Lancashire in unfamiliar guise.
After we went down one more deep lock near Appley Bridge, the countryside started to open out into flat fenland, more like Lincolnshire or Cambridgeshire, and with the same patchwork of market gardens and arable crops. Enormous fields of grass, manicured like bowling greens – what could they be? All was clear when we saw the machinery and lorries of companies selling turf! 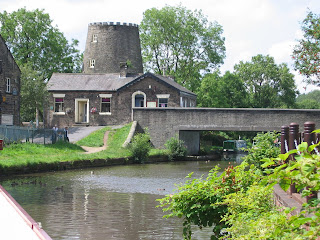 The stump of Parbold's 1794 windmill continued the fenland impression as we continued westwards, temporarily leaving the Douglas as the canal followed its winding route. We decided to overshoot the turning down the Rufford Arm and travel some of the way towards Liverpool, though not all the way – we had been advised that the canal got weedier further on, and we didn't really have a great appetite to explore a weedy canal as it went deeper into built-up areas!
So, back to the junction, under the towpath bridge and past the old dry dock to start our descent through seven more locks to Tarleton, 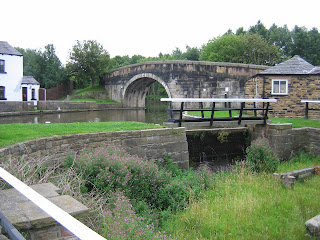 practically at sea level. In the process, the canal and the Douglas come close again, and the last stretch of the canal into Tarleton is actually the old course of the river.
Meanwhile, the weather (and especially the wind) began to occupy our interest, as we came closer to our Ribble crossing date. Too much westerly wind and the crossing could be cancelled. Just a bit less than that, and we would have choppy water to navigate in the estuary!
Posted by Dave and Val Taylor at 3:47 pm