Farewell To The Trent Tideway

APOLOGIES! OUR BLOG IS RUNNING BEHIND OUR TRAVELS. We left the Trent in early July. We are trying to get up to date as soon as possible, but don't want you to miss out on any part of our travels! CLICK ON 'Where Zindagi Is Now' to find our latest location. 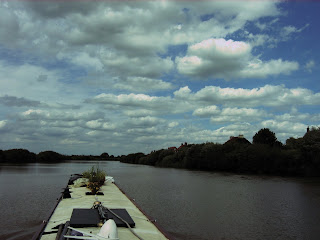 On our way down from Torksey to Stockwith, we had needed to 'punch the tide' from about Gainsborough onwards but this time, on our way down to Keadby, Sue (the lock-keeper at Stockwith) timed our departure so that we would have an easier run, all the way with the ebb tide. 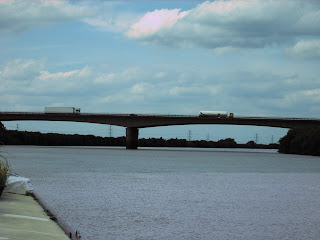 We had begun to get used to the Trent by now but, the further downstream we went, the wider it became. It certainly must be an awesome sight when it is in flood, but we are quite happy to have been acquainted with it in quieter mood! 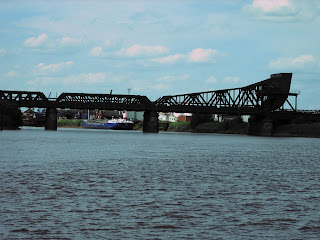 There was precious little to see as we cruised down on the ebbing tide. Perhaps there was more chance of meeting larger craft, but the river was wider and less twisted into tortuous curves than it had been upstream, so the dangers were probably less. We didn't meet any, anyway, though there were one or two large boats moored near Keadby Bridge.
In fact, there were only these two bridges in all the 12¾ miles from Stockwith to Keadby. The M180 was 2 miles before Keadby Bridge, and then Keadby Lock was about half a mile after it. 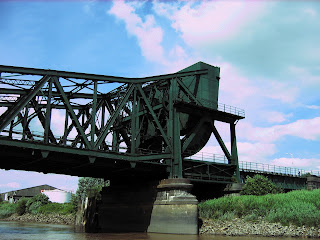 But Keadby Bridge is worth a closer look. When it was built in 1916, the eastern span was made to lift open on a rolling counterweight. According to our waterways guide book (Nicholson's), this is a tank which was progressively filled with water, causing the span to lift. Other sources say that it was electrically powered, initially by a battery and generator and later by mains electricity. Perhaps there was an electrically-powered pump for the water . . ? The span was last opened in the 1950s and was subsequently fixed in the closed position. Before the construction of the M180 bridge, Keadby Bridge was the only bridge into the Isle of Axholme. 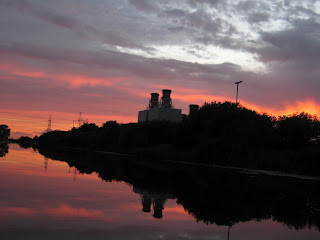 And so into Keadby Lock, and off the Trent for the last time on this trip. When the lock-keeper had brought us up to canal level, we had to wait for him to also open a swing bridge, and then we were on the Stainforth and Keadby Canal, part of the South Yorkshire Navigations.
As a fitting farewell to the Trent ('Power Station Alley'), what should be there on the canal but Keadby Gas Fired Power Station – !
Posted by Dave and Val Taylor at 5:41 pm