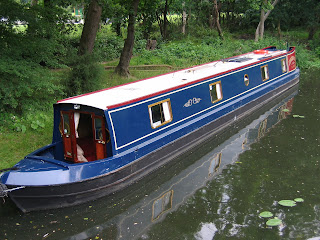 Here is 'Zindagi' looking rather different – the wind generator has gone from the roof, the 'cratch' frame and cover have come down from the front and even one of the brass mushroom vents has been removed! Why? Because the Basingstoke Canal has three VERY low bridges and we needed to be sure that we can get under all of them. We shall still be going very slowly when we approach them, just to be sure! 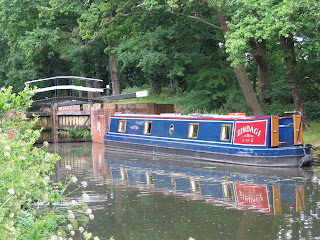 Having arranged to go up the Woodham and St. Johns locks on Wednesday morning, we arrived just below the bottom Woodham lock on Tuesday afternoon and met John, the Ranger who would be accompanying us up the locks the next morning. Just nicely timed, he told us, as they had not long removed a large log which had been blocking the canal. The rest of the day was needed to get all the 'superstructure' reduced.

Just before 7.30 on Wednesday morning, John rang to say that we would not be able to go up the locks, as there had been a massive breach in the canal further up and all the Rangers were needed to try and sort it out. Would that mean we would not be able to go further up ourselves? He was not sure, we would have to wait and see. After the heavy rain of the previous night, we enjoyed a quiet day in the sunny woodland surroundings – amazingly peaceful and secluded, though very near the M25, on the edge of West Byfleet and near a railway line! 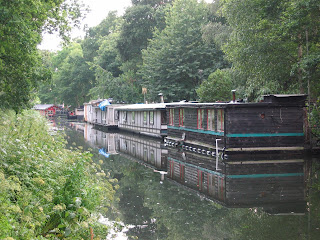 Later that afternoon, we got the good news that we would be able to start up the locks the next day. First call: what the guide book describes as "the peaceful, almost secret, houseboat world which still exists between Locks 1 and 3." Then up the locks through what the map shows to be surrounded by houses, but again the canal seems hidden in its own tree-lined world and insulated from the urban bustle except on a few occasions. One of these was very useful as we were able to moor up and pop into Woking's shopping centre more easily than by car! 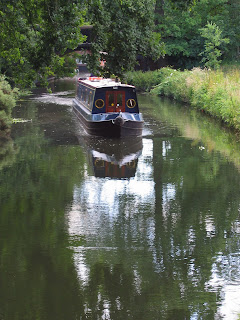 This is a really lovely canal, but so few boats seem to visit it. We have heard that only about 20 have visited from 'outside' so far this year – that's less than one a week! Water supply seems to be the main problem, but the canal authorities are working on that and so far this year has been OK, despite vandalism a few weeks ago and the breach the other day. 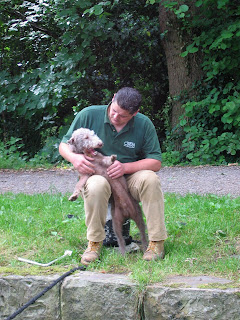 John (ably 'assisted' by his young Bedlington terrier, Rum) saw us up the first two flights (11 locks) on Thursday, and his colleague Paul took over on Friday morning for the longer haul up the 3 Brookwood and 14 Deepcut locks, in woody valley settings.
No sooner had we emerged from the top Deepcut lock than we saw two cyclists coming along the towpath towards us. Not unusual, except that this was Brian and Diane! We had arranged to meet them for lunch on Saturday but they knew roughly where we were and so thought they would come and find us! Bikes soon on the roof and away we went again.
We enjoyed lunch together on Saturday and then went to B&Q to get some flowers for Val's 'roof garden' (just in time to take them down for the low bridges!) Travelling by car is quite odd after three months of boating at walking pace!
Sunday has been very wet, so we have just 'sat' and done a few things in the boat, though it did stop raining long enough for us to go to a nearby Indian restaurant for lunch.
We'll soon be tackling those low bridges . . !
Posted by Dave and Val Taylor at 11:21 pm