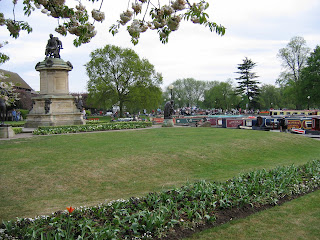 Just the other day we said it was probably unlikely that we would get as far as Stratford on this unplanned diversion down the Stratford-on-Avon Canal – but here we are!

Although the lock gates are heavy and the locks take ages to empty (though they are quick to fill!), we were making such good progress down that we thought we would come down to Stratford.

We aim to retrace our route northwards to Kingswood Junction now and then head down the Grand Union Canal as originally planned, meeting up with Jeremy next week as we get nearer to Leamington Spa, where he works. He has recently completed a sponsored cycle ride from Lands End to John o' Groats, in aid of CORD, the charity he works for, but still reckons he will be able to cycle out to meet us.

If you look carefully, you can see 'Zindagi' among the boats moored in the very centre of Stratford. We didn't realise that 23rd April is supposed to have been Shakespeare's birthday!

Posted by Dave and Val Taylor at 1:21 am