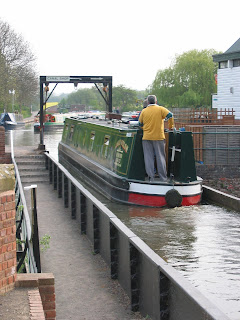 Back in 1976, we booked our first-ever canal holiday. Adam was nearly 3 years old and the holiday actually started on Jeremy's first birthday. We couldn't really afford it, but somehow managed it. We booked with Anglo-Welsh Narrowboats to take a boat from their base at Wootton Wawen on the Stratford-on-Avon Canal. Our friend Mike came with us, partly to help contribute to the cost!
It was, of course, the year of the Great Drought. The summer was scorching and we had started our first bit of vegetable gardening, siphoning the boys' bath water out to water the garden.
A few weeks before our holiday was due to begin, Anglo-Welsh phoned us to say that our holiday would have to be relocated, as the Stratford-on-Avon Canal was being closed due to lack of water. We took our holiday from Great Haywood instead.
Many people remember the drought that year. Do you remember the first rain AFTER the drought? It poured. That was the week we took our holiday. I think it rained every day, but we still enjoyed it. And here we are, still boating!
Wootton Wawen? We never made it there until last Friday, 20th April – only 31 years later! Here is a picture of one of Anglo-Welsh's hire fleet making its way back into the basin over the cast iron aqueduct. You can just see 'Zindagi' at the left, with the wind turbine up.
Posted by Dave and Val Taylor at 1:01 am