South to Birmingham – and out the other side 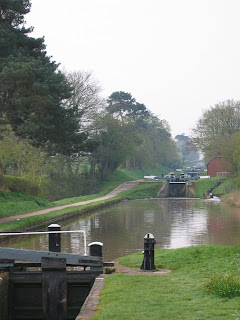 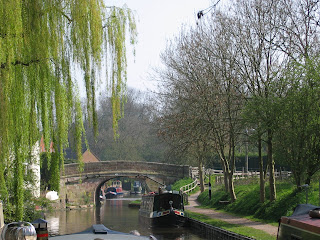 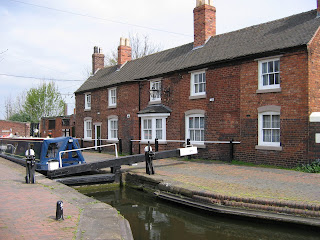 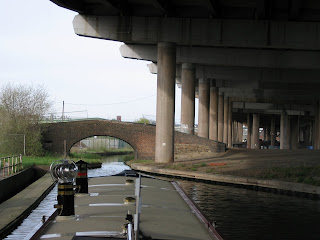 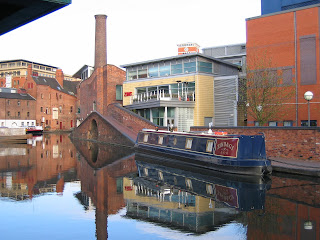 After we left Dave & Mary at Barbridge, we started southwards again, travelling down the Shropshire Union Canal – completely new territory for us. No particular rush, so we have taken a few days of just staying in one place and enjoying the warm spring weather. Despite the fact that the boat is brand new, there is a surprisingly long list of things that still want to get done, so there has been quite a bit of DIY going on, and more planned. Little touches like towel rails in the bathroom and clocks on the wall all add to the feeling that this is our home – and we have really got used to the fact as the weeks go by.
So, time for a few more photos to try to get you up to date with our movements. The first one is a view of some of the locks at Audlem on the Shropshire Union Canal. We seem to have 'lock days' and 'non-lock days', at least to some extent, and Audlem presented us with 15. Then a few more in the next few days as we climbed slowly out of the lower-lying countryside through dark red sandstone rock. The soil colour has sometimes reminded us of the rich red Devon soil, but the scenery is completely different, and very varied. The next shot gives you an idea of some of the beautiful little places we have been through – this is the Boat Inn Bridge at Gnosall in Staffordshire.
Even the climb up the 21 Wolverhampton locks on Tuesday was amazingly rural to start with, and ended at these cottages at the top lock. Time for lunch almost in the city centre, and really peaceful. We had wondered whether to stay there for the night, but decided to press on and get to Birmingham.
What a strange journey, but fascinating! Seeing how the old and the new sit right next to each other or, in the case of the M5, right on top of each other! The towering columns supporting the raised section of the motorway as it enters Birmingham follow the canal's route for a while, creating the strange sight of an old canal bridge dwarfed by modern engineering. Our arrival at Gas Street Basin was delayed by having to refill a short section of canal between two locks, as vandals had let most of the water out, but that was interesting in its way, and we ended up in a very quiet corner, had a tasty meal in a nearby Indian restaurant, and then did a little shopping the next morning before heading on south and joining the Stratford-on-Avon Canal, where we are now moored, just a little southeast of Birmingham.
Posted by Dave and Val Taylor at 12:20 am