Birmingham to Blisworth – for the Winter! 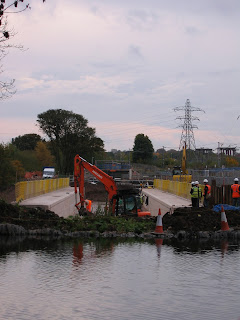 Leaving Birmingham's Gas Street Basin by the same route as a few weeks earlier, and having done battle with crosswinds just round the corner as we pulled in for water, we soon found ourselves looking at the new aqueduct at Selly Oak, which had progressed greatly since we were here just a few weeks before.

You might like to look at the website that describes the project – the aqueduct is 'Project 3B' at http://www.sellyoaknewroadphase2.co.uk/4.html .  You will need to scroll down a long way to find the pictures of the aqueduct, as the rest of the project seems to have also rolled ahead well.  Try comparing this photo with the picture gallery of progress – looks like the new aqueduct has been in use for some time now! 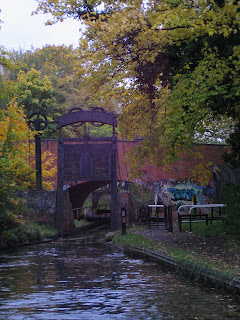 From the new to the old . . . We turned off the Worcester & Birmingham Canal at King's Norton Junction, joining the northern section of the Stratford-upon-Avon Canal, and passed through the (now disused) stop lock with its characteristic guillotine gates. 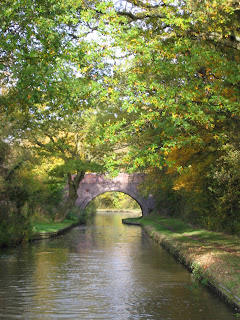 We last came this way in 2007, on our first southward journey with Zindagi and had forgotten how attractive it is, despite being right on the edge of Birmingham. 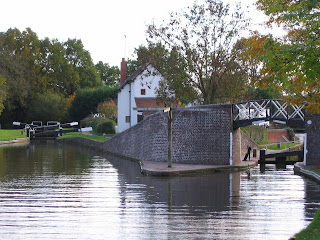 Two days after leaving Birmingham, we reached Kingswood Junction, where the Stratford-upon-Avon Canal continues (right) down to Stratford itself but we branched off left to join the Grand Union. Our last narrow lock for a while! We aim to be back here later this year, to go down to Stratford again and (this time) onto the River Avon, one of the last remaining sections of the connected waterways that we haven't visited. 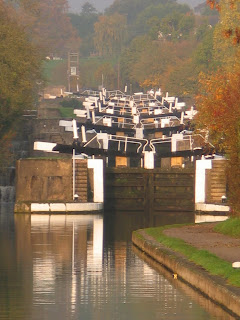 The rest of our journey to Blisworth would be on the Grand Union Canal, with 59 broad locks on our way – 21 of them concentrated into 2 miles at the Hatton flight near Warwick. Last time we came down, we shared locks with another boat, which shared the work and made for speedy progress down the flight – 2½ hours. This time, on our own, we still didn't do badly, getting down the 21 in just over 3 hours. This picture shows you only 6 of the locks, and they are a little further apart than it seems – telephoto lens effect! 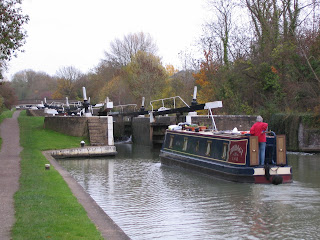 Having come DOWN the 21 Hatton locks (plus 2 more soon after), predictably the next task was to go UP some more! 12 of them scattered along the canal from Leamington Spa onwards, then 8 all together at Stockton.
Another couple of days, and we arrived back near Blisworth as planned. When we enquired about a winter mooring at Blisworth Marina back in October, we had been surprised to learn that it was fully booked up, but we tried the nearby Gayton Marina and were able to get a good space when we arrived.

That was back in November, and we are still here!  We should have a little more of an update for you soon . . .
Posted by Dave and Val Taylor at 9:09 pm