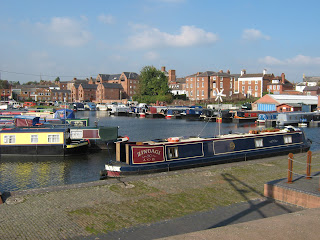 It was back on 9th October that we arrived in Stourport from the River Severn, so you can tell how behind this blog is! In case you wonder where we are NOW, please just click on the 'Where Zindagi is Now' link. We expect to be here near Blisworth for a month or two, so hopefully that will give us a chance to get you up to date! 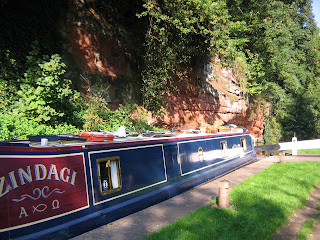 We have enthused before about the Staffordshire & Worcestershire Canal, especially this southern part. Just a few weeks earlier, we had made our way down to the edge of Wolverhampton on the northern section, and here we were heading north to the same destination! Val's appointment at Shrewsbury Hospital Fracture Clinic was booked for the 19th, so we had time for a relaxed cruise up through pleasant countryside, following the seam of red sandstone like this cliff at Caldwall Lock on the outskirts of Kidderminster. 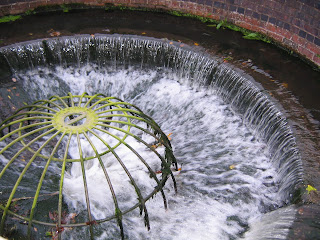 Other characteristics of this canal are its lock cottages and the frequent use of round weirs.  This one is at Debdale Lock, where we noted the rock-carved stable in February 2008. 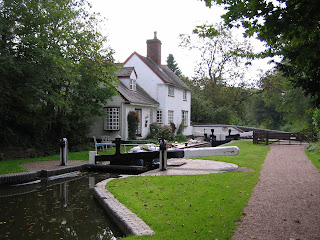 Whittington Lock near Kinver shows off its pretty cottage.
We soon came to the Bratch Locks near 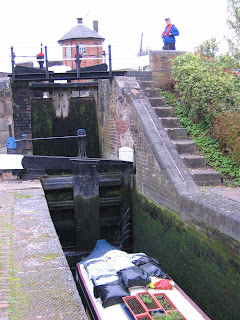 Wombourne, and were helped up them by the young lock-keeper. Seems like we may have seen his father when we first came this way in 1976! Since then, the octagonal lock office has lost its layers of white paint and been returned to the original brick. These locks are fascinatingly different from any others we know. Though they look like (and were originally designed as) a set of 'staircase' locks, they have TWO sets of gates between each lock chamber, but impossibly close together, just a few feet! The secret is in the large 'side pounds', where water is stored, which are connected by channels to the space between the gates. Hard to explain, quite like the arrangement at Caen Locks (Devizes) on the Kennet and Avon (which are also not staircase locks), but contracted into shorter spacing between locks. A bit daunting for the newcomer (like us in 1976), but OK when you understand how they work! 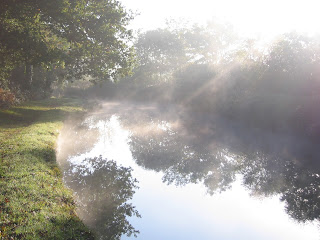 Predictably, we arrived back near Wolverhampton (and so within reach of Shrewsbury) a day or two earlier than necessary, so we simply 'mooched' on a little further up the Staffs & Worcs before returning to our rendezvous with Adam for a lift to Shrewsbury. 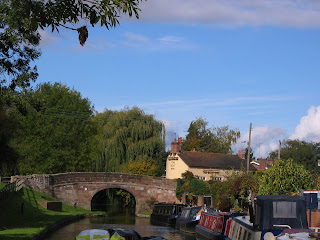 Val's arm came out of plaster on 19th October and the medics were pleased with the healing process, but of course then the physios needed to help her to get it mobile again, so we couldn't go away for a while longer! They wanted to see her again a week later, so we took another little trip up the Shropshire Union, this time going as far as Goldstone Bridge before turning back to Wheaton Aston. Here's Boat Inn Bridge at Gnosall Heath. 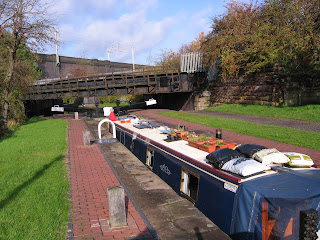 The next week, the physios were happy with Val's progress, though they still wanted her to come back after another 2 weeks, but that would give us plenty of time to get on our way to our intended winter mooring at Blisworth. So, guess what? Up the Wolverhampton flight for the fourth time, just 5 weeks after we last went up – and we have never been DOWN these locks, only up them! 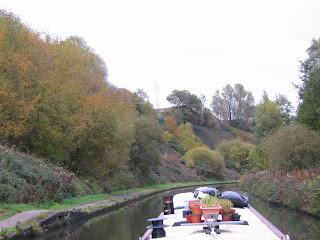 Our route was then an exact copy of the last time. We stopped overnight in the same place at the top of Wolverhampton Locks, and again in Gas Street Basin, for the third time in exactly the same spot. On the way, Birmingham's Main Line treated us to its own display of autumn colours.
Posted by Dave and Val Taylor at 6:57 pm