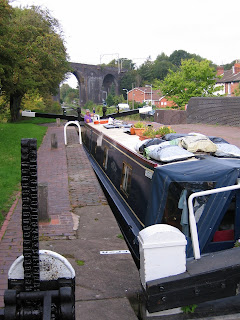 Our original plan after visiting Adam and Rachel (and taking the balloon flight) had been to go up into Birmingham and then down the Worcester & Birmingham Canal to Worcester, which goes down the longest flight of narrow locks on the whole system – 30 locks in a little over 2 miles, with another 6 in the next mile! Oddly enough, it was part of the (over ambitious) route we had planned to take on our first ever canal trip in 1976 – thwarted by the effects of drought closing this canal! Now we were taking it on with Val's left arm in plaster – was this crazy too?

The first test of that came with the need to climb the 21 locks up to the centre of Wolverhampton, and it went quite well. Val was not totally incapacitated and could handle the boat in the locks, though Dave had to take it on from one to the next. We began to develop a modified lock-working system. If you look very carefully at this photo, you may be able to see Val waving her purple-plastered arm as we work up the Wolverhampton flight! 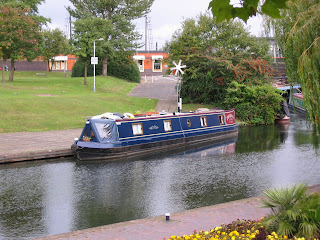 From the very pleasant visitor moorings at the top of the flight (and right next to the centre of Wolverhampton), the canal follows Brindley's 'Wolverhampton Level' all the way into Birmingham – the route we followed the first time we came this way. Last time, at the end of 2008, we took the very circuitous route via the Wyrley & Essington and other less used canals. This time, as time was limited, we opted for Telford's New Main Line, which cuts off 7 miles of Brindley's original route. 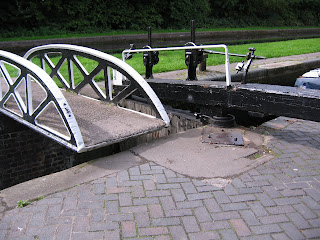 This route took us down the 3 Factory Locks at Tipton Green, a route we had not followed before, where we spotted an ingenious solution to the old problem of passing a footbridge without disconnecting your horse from your boat. We hadn't seen this option before! 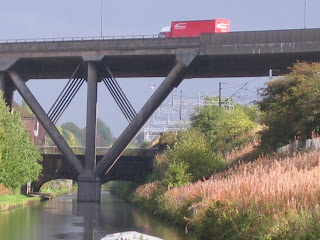 We passed the junction for Netherton Tunnel, where we had turned (back in early 2008) to take the Black Country route via Dudley and Stourbridge to the Staffs. & Worcs. Canal. Then past this interesting spot, where the old Wolverhampton Level crosses the newer Main Line on an aqueduct, the railway runs alongside the Main line and crosses the Wolverhampton Level, and the M5 motorway sails high above them all. 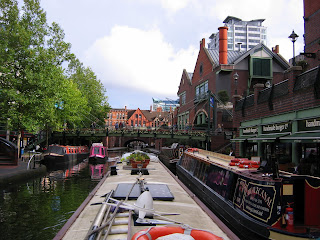 And so to the bustling heart of Birmingham's Brindley Place – and just round the corner to Gas Street Basin, an amazingly pleasant place to moor overnight. This must have been our third visit.


It was here that the old 'Worcester Bar' used to separate the newer Worcester and Birmingham Canal from the older Birmingham Canal, and goods had to be transhipped across from boats on one side to the other. The bar remains, but a 'stop lock' was built in 1815 to join the two systems, though its gates have long since been removed. The bridge over it is a 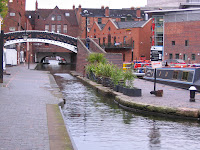 modern copy of a typical 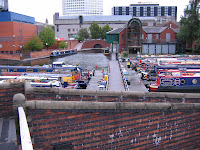 local canal bridge – apparently there used to be just a swinging plank bridge over the stop lock! 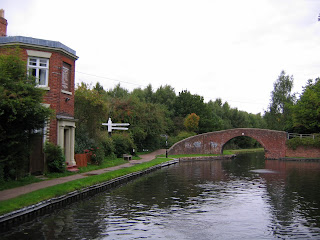 Out of Birmingham, then, on the Worcester & Birmingham Canal. We had turned east at King's Norton Junction on our way down south in April 2007, but now we were heading south and west into new territory for us. (We did come a short distance down this canal in 1986, our last hire-boat holiday). 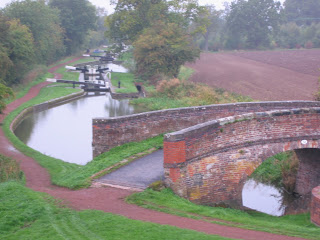 9 miles, 3 tunnels but 0 locks from Kings Norton, we came to the top of the Tardebigge flight, went down one lock and enjoyed the moorings there for a day before setting off down the remaining 29. It was NOT a marathon, NOT a struggle at all – just easy locks in pleasant countryside – and Val was developing the knack of controlling the throttle lever with her elbow! 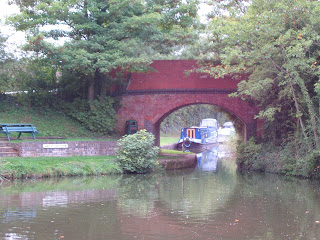 On our way down Tardebigge, we had discovered that our super Sterling battery charging system had developed a fault, but the address we had for them was in Worcester, so Dave emailed them for advice. By then, we were on the edge of Droitwich, and it turned out that they are now based there, so Dave uninstalled the unit, walked (a few miles!) to their factory, where he was promptly given a replacement unit. Then back, refit the unit, and off we could go – thanks, Sterling! Meanwhile, an opportunity to look at the restoration work on the Droitwich Junction Canal. Not very much more work to do before there is a link from Hanbury Junction down to Droitwich, then on from there to the Severn via the newly-restored Droitwich Barge Canal. The picture is the view through the junction bridge at Hanbury. 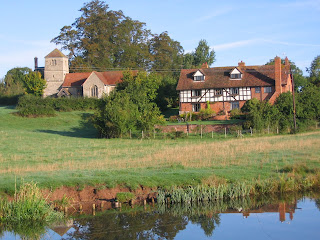 Our way down to Worcester passed through more 'quiet' but pretty countryside, including Church Farm at Oddingley, before we started making our way round the suburbs and then into the heart of the city. 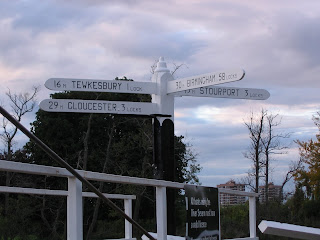 Through Worcester to the Severn, where the signpost at the river's edge showed us where we had come from, where we were going next, and also our planned return route . . .
Posted by Dave and Val Taylor at 6:04 pm

Certainly interesting with much variety in this area of our canal systems.

Am left wondering what Val has done to her arm. Maybe I will see if I check some more posts.

Hi, Barbara. Val broke her wrist in Shrewsbury in September. It is in the previous post, but easy to miss it. All OK now. Need to update the blog so you and others will know where we have been!!