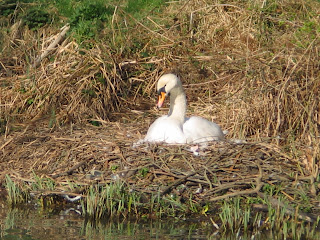 Five months moored up in Blisworth Marina, and we were really ready to get moving again. Val and Peter there had made us very welcome and looked after 'Zindagi' when we had been away in Devon. In many ways, we had adapted to our different lifestyle there, and it had begun to feel like home, especially with developing friendships in Blisworth village itself, 20 minutes walk away.
In spite of all that, though, once Val's knee was obviously recovering well, we were looking forward to travelling again. David and Mary from Okehampton were planning to join us for a couple of days in early April and we were only booked into the marina 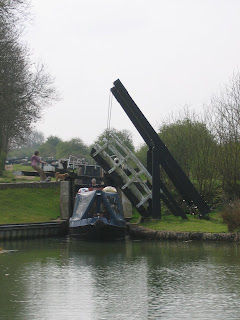 till the end of March, so 1st April saw us chugging along to Blisworth village to moor there for a few days before starting off down the Northampton Arm. Just along from our mooring was the first nesting swan that we had seen this year.

So, just a few days later, we started along the Northampton Arm, where we had arranged to meet David and Mary (and Whisk!), courtesy of Mary's brother Ollie giving them a lift to our rendezvous. Soon the old team were working smoothly together again and we made our way quite swiftly down the 13 locks of the Rothersthorpe flight. David and Mary had specially offered to come and help us down this long flight (plus the remaining 4 locks down to join the Nene in Northampton) and we really appreciated it, especially Val, as it meant that she didn't need to be standing at the tiller all the time, putting too much strain on her knees. Thanks, folks, we love having you around - and not just to work through those locks!

After stopping for lunch just on the outskirts of Northampton, we pressed on, leaving the canal and 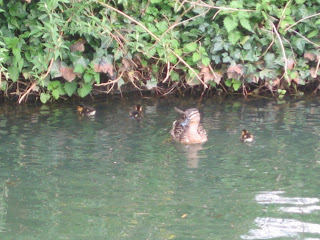 joining the River Nene near the town centre, where we saw our first ducklings of the year, then out the other side into open countryside again, to a pleasant mooring at Cogenhoe (pronounced 'Cook-no') which we remembered from our first trip this way back in 2007.

After a quiet night, we set off again and welcomed Ollie on board, as he was able to join us for a day on the river - a new experience for him, apparently! Laddie, Ollie's rough collie, was not keen on getting on or off the boat, but seemed quite content lying on the back deck while we all managed to avoid treading on him. Meanwhile, Ollie got well and truly 'stuck in', working the locks and taking a turn at the tiller. 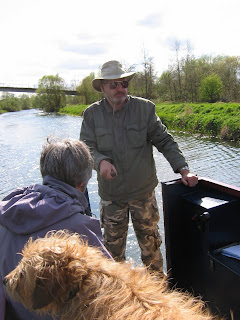 And on we went . . . familiar territory for Val and me, a new look at familiar places for Ollie, and 'new ground' for David and Mary.

Looking at the map, we reckoned that we should be able to stop and moor at Denford, where the book said that there was a pub that served meals - just what we needed! Arriving there a little late in the afternoon, we found that the moorings were non-existent, it was quite difficult to get to the village, and the pub had just closed two weeks earlier! Plan B was soon hatched and put into operation. Bonnie (Ollie's other half) would come and collect Val, while the rest of us would be able to walk over the fields to 'the Woolpack' at nearby Thrapston, courtesy of a local couple showing us the way. It worked: we didn't get lost, enjoyed a really good meal there and got back to the boat OK.

In the morning, we did much the same, but this time by boat! We worked through Denford Lock and chugged the mile or so down to Thrapston Nine Arches moorings, where another boat was most conveniently just leaving, so we were able to slot in nicely. David & Mary disembarked and Ollie came to take them back to his house (and their car), ready for a long drive back down to Devon! 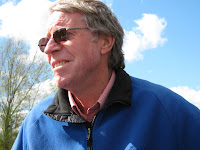 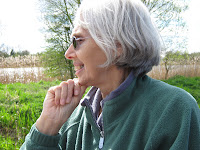 Meanwhile, our old friends Ian and Gwen (from India days) had made contact and could fit in a visit on the same afternoon, so we were able to welcome them for a VERY brief visit, just going for a short trip down and up the river and back - hopefully enough to make them want to come for a bit longer next time!
At this point, Dave's sore throat began to develop into something worse, but Ollie had kindly agreed to ferry us back to Blisworth to collect a large parcel of tools that had arrived after we had left, so he somehow put up with the coughing and spluttering and as far as we know suffered no ill effects! That occupied the next day . . . 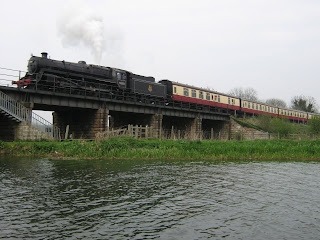 To avoid overstaying our alotted time at Thrapston, we then moved on near to Oundle. We knew there were some quiet moorings where we could lie low and try to deal with the 'flu - that's obviously what it was!
For the next few days, we followed much the same pattern: travel on a bit and then rest for a couple of days. We enjoyed the new moorings at Wansford Station, with fairly frequent visits from the steam engine, and gradually made our way down to Peterborough - the furthest we had travelled this way before - but that was all going to change!
Posted by Dave and Val Taylor at 9:24 pm

Hello, I wonder if you remember me? You may need to cast your mind back 20yrs! 'Jel' and I were best mates when we went to Rise Park Jnr school and for a time, visited you all in Lapford when you moved from Romford.

I felt compelled to comment on your excellent blogs after spending the morning reading through. After wondering how he was doing, I googled Jeremy's name which led here! I am so pleased to learn you are all well and have enjoyed reading about your time aboard Zindagi. Please say hi to Jeremy for me.

I don't know what prompted me to randomly search google this morning, but it all made sense when I read your latest post; I am writing this from Peterborough! Wansford being a 5-minute drive from me! I shall have a glance down the canal in a moment - you never know!

Great to hear from you after all these years, Dan! We have emailed you and maybe Jeremy will be in touch as well. Hope to welcome you on board sometime, especially as you are not far away!