Eastwards Through the 'Middle Level' 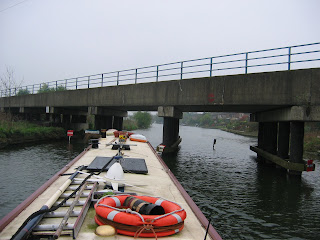 This railway bridge at Peterborough was to take us into completely new territory. The mysteries of the Middle Level awaited us, our first real encounter with Fenland waterways. Looking on the map, we had seen the many miles of the Great Ouse and all its tributaries, but the only way through from the rest of the canal system was to follow the route we had taken, down the Northampton Arm of the Grand Union to the Nene at Northampton, then down the Nene to Peterborough and now off the Nene and onto the Middle Level. There is a plan to join the Great Ouse at Bedford to the Grand Union at Milton Keynes - they are very close, so it's logical enough! In the meantime, we needed to take the scenic route! 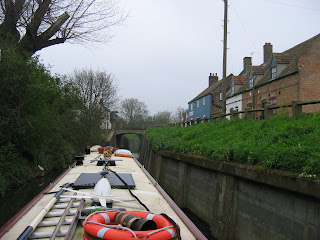 The Middle Level has a long and complicated history, largely concerned with land drainage over the centuries but also including boat transport. But we were in for a surprise as soon as we phoned up to arrange to go through Stanground Sluice. Did we know that the lock at Salters Lode (at the other end, joining onto the Great Ouse) was closed, awaiting completion of the new hydraulic sluice gate there? No, that was news to us; how long would it take? Apparently it had been scheduled for completion in December - it was now mid-April, but they thought it should be done in a week or so!
We hadn't planned to do more than just go 'straight through', but we could always dawdle a bit more - a little more recuperation from the 'flu would not go amiss . . . 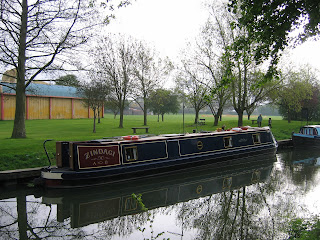 We soon came to Whittlesey, chugging along well below street level in a narrow concrete-lined channel and then negotiating a tight bend under a bridge. Then it all opened out a bit and we found the moorings next to the Leisure Centre. Nice and quiet, but not too far to walk into town if needed. Also a good rendezvous for our friends Alan and Jan from Blisworth, who had offered to bring out yet another heavy parcel of tools which had arrived late at Sally's house - and Sally and Ellie (her cocker spaniel) came too. It was great to see them all and enjoy a meal together at Whittlesey's Sunshine Cafe. Thanks to you all for your help and friendship! 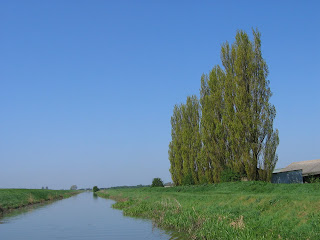 After a few days there (and the occasional phone call to check progress at Salters Lode), we moved on into real fenland. 'Big skies' we had been told. That's because the land is so flat and there are very few trees! Come to that, the waterways are mostly straight and often a bit below the level of their 'flood banks'. But the weather was warm and sunny, so we didn't mind, finding variety where we could - like these trees, for example!
Back in the 1980s, when we lived in Romford and were wondering where we could find somewhere with some land, we looked at this area (and others) before finally settling on Lapford in Devon. It 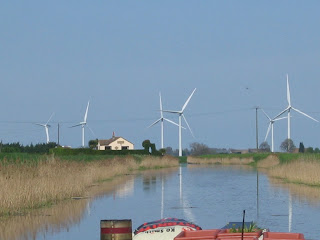 was a little odd to see the countryside that could have become our own familiar territory over the last 20-odd years. Lovely rich peaty soil here in the fens, but we both agree that Lapford was the right choice for us - Devon clay or not!

After a couple of days moored at March, the news from Salters Lode was getting more hopeful - they hoped to have the lock operational on the Thursday, which would mean a 7.30 am 'locking-through' time to catch the tide right on the Great Ouse. If we left it until the Friday, we would go through about an hour later. That seemed a bit better and gave us time for a leisurely cruise, as well as allowing for the possibility that all would NOT go well at the the first attempt! 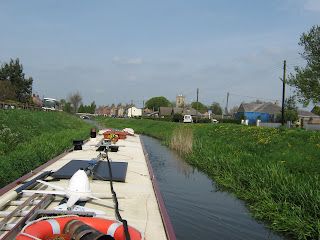 So we set off, past lots of wind turbines, and on to the twin villages of Upwell and Outwell on the Well Creek. More history and information about this from the Well Creek Trust. To get here, we had climbed UP a level again, having gone DOWN two locks from Peterborough. We realised afresh how much of the fenland lies below high tide level! Even so, as we were travelling along Well Creek, we were still below the level of the two roads either side of us.

A couple of hours cruising brought us to Salters Lode. By now the news was good! Paul the lock keeper was delighted as the first use of the new gate had gone smoothly that morning, so we booked in for 8.30 on Friday morning. Our timing could hardly have been better! We had heard stories of several boaters who had been 'trapped' 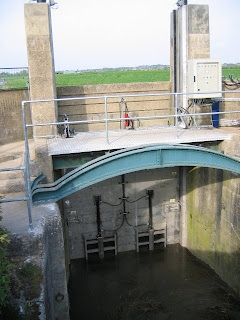 one side or the other, unable to get either on or off the Great Ouse for months. We had just chugged along and here we were, able to go straight through - Thank You, Father!

So, here it was, the new lock gate/sluice at Salters Lode, with all its new hydraulics and computer controls. Paul was very pleased to have it working again at last but just a little concerned at the potential for the technology to let him down. So far, so good! Only when we looked the other side did we realise how much below high tide level we still were - and the tides were not yet at their highest!
Ready for our next bit of tidal water the next morning, though it would only be about half a mile before we would lock through Denver Sluice onto the (non-tidal) Great Ouse.
Posted by Dave and Val Taylor at 5:07 pm