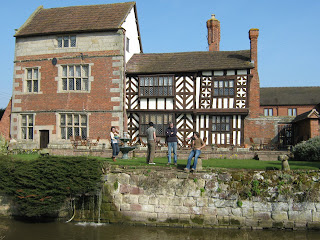 So, why did we travel up to Shrewsbury from Devon, instead of just heading back to the boat at Blisworth? Well . . .
Back in January, Val had a 'significant' birthday, and we both thought it would be good to get the 'children' together to celebrate. We quite often see one of them, sometimes two, but not often do we manage to get us all together, so we thought we would go and spend a night at a hotel and invite the 'kids' to come and join us for a meal.
By early March, we still hadn't managed it, but the three of them had now taken the idea over. Instead of us inviting them to join us for a meal, they were planning to book us all into a hotel for two nights, and pay for it all as well! 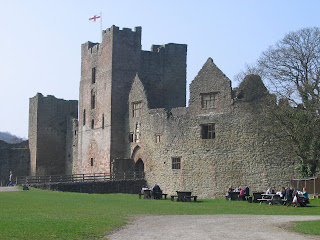 Which is how we all ended up in Shrewsbury! We travelled up from Devon on the Thursday and stayed overnight with Adam and Rachel. Shireen and Thor arrived by train in the afternoon and Jeremy (delayed by work) turned up in the evening.
We all checked into this fairly small but luxurious hotel just outside Shrewsbury, largely modern but with some lovely old parts.
After relaxing in the sun on the terrace by the moat after breakfast, we decided to visit Ludlow together, where we mooched round the open-air market and had a lunchtime pastie in front of the castle. Val needed to rest her knees but the rest of us went for a walk around the outside of the castle walls – Thor enjoyed being with his uncles! 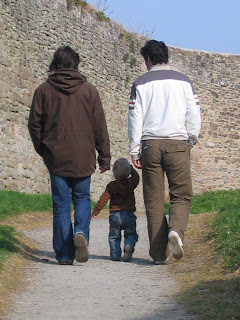 Back to the hotel for another quality evening meal and the obligatory group photo – little Thor was already in bed!
On the Sunday morning, we all checked out and descended on Adam and Rachel's house, where Thor was introduced to the pet rats! Then on to a slightly more 'normal' meal together – Sunday lunch in one of Shrewsbury's riverside pubs – before we headed off in our various directions. We just managed to fit Shireen and Thor in the car with us, as they were going on down to London for the next weekend, and wanted to spend a little time on the (stationary) boat with us on the way. 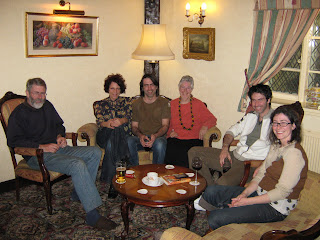 Interesting to see the family all together, especially when i double clicked the photo to full screen.

Caught up on theDevon pics. too.

Our Grand daughter Rebekah was born by C-Section Wednesday so we are all very relieved that all went well.
Thought you were going to say you got a flushing toilet!!!!!!!

They certainly do grow, don't they? Sorry about the delayed reply, but great news about little Rebekah! Recovering from the 'flu and gradually catching up with all sorts of things, including the blog!