First Impressions of the Great Ouse 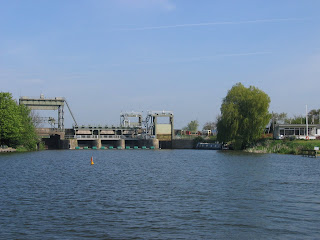 Another (brief) brush with tidal waters as we left Salters Lode Lock and swung into the ebb tide of the Great Ouse, before turning to face it and travel the half mile or so upstream to Denver Sluice, which was open and ready for us. Once through that, and we were back on non-tidal river, but still in the world of flood control, with flood protection banks that would accompany us for several miles to come. We continued to be aware that we were very much in the Fens, with their long history of floods and drainage. Denver Sluice itself is a major element of the flood control for this whole area. The smallish 'guillotine' gate to the right of the picture is where we had just come up - another narrowboat was waiting to go down next. 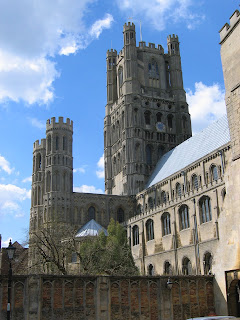 We moved on for a few miles, having decided that we would aim to travel all the way up to Bedford and explore the 'side turnings' on the way back downstream. Ely was the next place to look out for, and next day we could see its cathedral rising over the surrounding countryside.
Val may have only had one knee operation done so far, but she certainly seems to be extending her walking range! We walked into the centre of Ely and the cathedral, and back again, without too many ill effects!
After a couple of days on the edge of the town (city, really!), it was good to move on just a couple of miles and moor up in the countryside. There are lots of moorings on the whole Great Ouse system, some provided by the Environment Agency for all boaters and some by GOBA (the Great Ouse Boating Association). As we have joined GOBA, we have the freedom to choose almost any mooring site. It's not quite like the canal 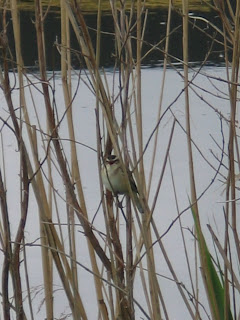 system, where we can moor almost anywhere along the towpath, but it is a lot better than the River Nene, where moorings are scarce, to say the least!
One of the benefits of the rural moorings is the abundance of wildlife, especially birds, though often we can hear them much more easily than see them. Here's a Sedge Warbler (I think!), still pretty invisible in spite of the telephoto lens . . . Try clicking on the picture to enlarge it. There are swans in abundance, geese, Coots, Moorhens, Mallards, Tufted Ducks, warblers (various), Reed Buntings, Lapwings, Redshank, Cormorants, Terns, Swallows, Sand Martins . . . the list goes on!
More reminders of the history of drainage in the Fens as we cruised past 'Stretham Old Engine', built in 1831 to lift water from 2,500 hectares of fenland into the river. As the drainage continued, the land level fell and the diameter of the scoop wheel had to be increased from 8.8m to 10m and then again to 11.25m. If the engine was still in use, this largest wheel would now be ineffective too, as the fenland continues to shrink! 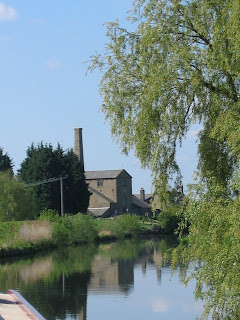 We were now on a section of the system known as the 'Old West River' which joins the 'Ely section' of the Great Ouse with the 'Bedford' part, and strangely, after the next lock, we would join another short tidal section, as the 'Old Bedford River' links straight to the tidal river below Denver Sluice. Complicated? Just the result of centuries of schemes to drain the Fens! This was our first lock in about 30 miles of cruising since Denver Sluice, and the only manned one on the whole Ouse system.
Here at Earith the Great Ouse begins to change its character, but we'll tell you about that next time . . .
Posted by Dave and Val Taylor at 9:15 pm